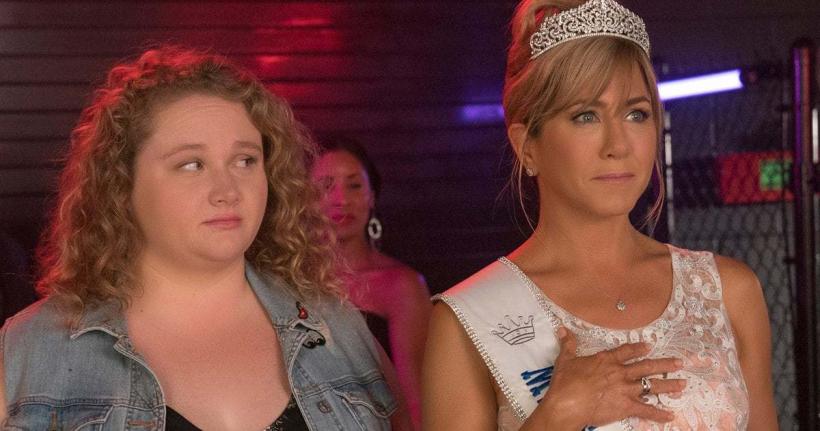 The reviews for the new Netflix movie Dumplin’ are alight with the phrase “self-acceptance,” but I had a very different take-away from the film. Dumplin’ stars crush-worthy Danielle Macdonald as Willowdean, a plus size teen who competes in a beauty pageant in hopes of making a personal and political statement. Her plans quickly turn, however, and she begins to question her relationship to her friends, her love interest and her mother, played by Jennifer Aniston.

I got a bunch of delighted, excited texts about Dumplin’ from friends before I got a chance to watch it. So I was excitedly anticipating Dolly Parton, queer characters and, yes, seeing Danielle Macdonald on screen again (I loved her in the 2017 film Patti Cake$). In preparation for our movie night last week, my beloved house guest, Rebs, and I made a shaker lemon pie, got dark chocolate, opened a bottle of red wine, and sat down in my tiny living room filled with the piney smell of the tiny Christmas tree we just couldn’t give up (it’s still in the apartment, actually).

I know I can be a lil’ bit of of a stick-in-the-mud stink-face feminist, but this movie did warm my heart and inspire a bunch of aww’ing. I loved singing along to “9-5.” I loved Aunt Lucy. I loved Willowdean. I loved the scene where Bo touches her back fat when they share their first kiss. I loved the drag queens (even though I agreed with Kyle Turner’s recent observation in the New York Times that drag queens often play second fiddle to straight women and are written into scripts to “prod these films and shows, which are all about performers and performances, to work out what ‘real’ and ‘authentic’ mean, sometimes at the cost of the drag stars.” Dumplin’ is absolutely a win for fat representation — with not just one but two fat characters, each with different relationships to the beauty pageant and the general status quo. And, yes, I also loved that weight-loss was not the conclusion of this film.

But I left the film feeling that this was less a story about liberation from social expectations than one about a fat teen assimilating into a thincentric culture. Though there was no weight-loss narrative (the usual conclusion of a film with a fat main character), there were other assimilative themes if you looked a little deeper. Here are the three that stood out for me:

Willowdean’s aunt — a sassy and stylish plus size babe who introduced her to Dolly Parton — was her hero. She appears in several flashbacks, lively and pink-cheeked. Like PopSugar, I too wondered how the hell Aunt Lucy died. If the flashbacks serve as any clue, she was in her late-30s or maybe early-40s when she died. Unlike any other film I’ve ever seen, there is absolutely no elucidation of her death. Jennifer Aniston’s character makes a vague reference to Lucy not having taken care of herself, which is universal code for “she died of fatness.” If that presumption is correct, it means that we as the audience are meant to engage in fatphobic thinking in order to connect the dots, and fat is meant to be so obviously life-threatening that Lucy’s death requires no exposition. Further, if we’re supposed to be rooting for Willowdean then presumably we either have to accept that if she stays fat into adulthood she’s going to die (which is fatphobic), or she’s magically not going to be fat by the time she’s, like, 38 (also fatphobic). All of these things are examples of bigoted thinking. Even though there is no overt weight-loss narrative, weight loss expectations are implied by proxy through Aunt Lucy’s untimely death.

Bonus question: Is it easier for the audience to root for a fat teen — essentially a child — in a way that we can’t actually root for a politicized adult woman who is choosing herself over societal expectations? Is Lucy’s death possibly also about using the narrative to caution against an adult fat woman loving herself?

I thought if #MeToo taught us anything it was that the dreamy kind straight thin white dude archetype in teen movies was a complete narcissistic projection of the men in Hollywood who were actually sexually assaulting women. Did we not learn that?

Let’s put aside the fact that history has taught us that white dudes have committed some of the most violent and unforgivable crimes against humanity and we in fact will never find redemption through our romantic entanglement with them for a second, and talk about what Bo represents. Bo is a metaphor for our society and what it values — whiteness, thinness, straightness, masculinity. After Bo victim-blames Willowdean for her negative body image and calls her a coward, she has to return to him hat in hand before they can reunite at the end of the film. This act is symbolic of what is expected of every marginalized person in order to be assimilated into society — accept that the problem resides within them (rather than insisting that the problem resides within social injustice), show remorse for the crime of their existence, and embrace the culture on its terms. Perhaps more importantly, both Willowdean and the audience understand that he is a “catch,” and their romance only becomes remarkable or aspirational through the acceptance of Willowdean’s fat inferiority.

3. The conclusion of the film features Willowdean apologizing to three thin people for behavior that occurred while she was coping with fatphobia.

Willowdean ends up apologizing to her best friend, her mother, and Bo (all thin people) before the film’s conclusion. Her transgression? She acted out and spoke her mind in response to her experience of fat discrimination. As my friend recently taught me: typically the coping mechanisms that girls have in response to trauma are criminalized or socially punished. Willowdean was facing fatphobia, and responded in ways that helped her deal with being forced to navigate bigotry while watching the people closest to her not experience it. Each of them serves as an important symbol of assimilation into our culture. Bo represents the expectation of women to join heterosexual union. Her mother represents the primacy of biological family. And the best friend represents, to me, the understanding of her social role as a straight woman.

I can imagine my younger fat self — who very much hoped a cute boy would someday fall in love with her and who couldn’t even dream the biggest dream of her own freedom — would have loved this film. But let’s stop looking to stories like these and calling them triumphs for self-acceptance. This is the same teen story that the US has been churning out since the 1980s. Sure, self-acceptance can look like everyone in your life being thin except for one friend, dating a thin person and loving your fatphobic mom, but for a lot of fat people that is really, very much not what the process of self-acceptance or liberation look like.

Self-acceptance is about choosing yourself even when it makes you illegible to your culture. And when you’re a fat woman, self-acceptance is not a tidy journey. It’s arduous and complex and delicious. And it’s high treason in this culture of ours.

If you like this article, please share it! Your clicks keep us alive!
Tags
take the cake
Dumplin'
fat phobia
fat positive
Virgie Tovar