That Time I Found A Tumor On My Baby 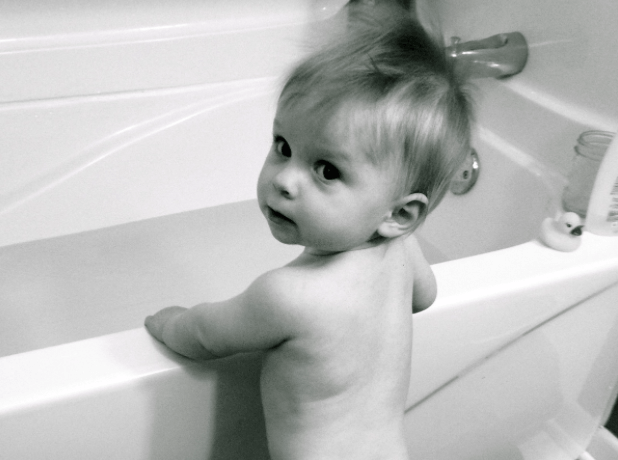 Image courtesy of the author.

There have been a handful of times in my life in which I’ve felt sharp and blaring fear, but no instance was ever so acute or so prolonged as was the period in which my husband and I hung in the balance waiting to find out whether or not our 10-month-old baby girl had cancer.

The night I discovered that tumor on her back was essentially just like any other. I’d spent all day long wrangling that sweet child of mine. I’d weathered yet another day of changing diapers, breastfeeding, folding laundry, deciphering unintelligible attempts at communication and other such tasks. And when that girl was finally asleep, I did the thing that I always do: I flipped through photo after photo on my phone, fawning over that adorable child of mine as though I hadn’t just spent every waking moment of the day with her in my arms.

I’d given her a bath that evening, which meant that I’d taken an inordinate number of pictures of that sweet little bare bum of hers while she stood at the edge of the tub waiting to get in. And it wasn’t until I was scrolling through those images later that night that some tiny part of my brain started blaring a little alarm at me; because there, in each shot, was this small but unmistakable lump on her back, sitting just below her left shoulder blade. I'd never noticed it in person, but there it was in these pictures, staring back at me.

I worked hard to stay calm; I didn’t want to overreact, so at first, I kept it to myself. But I spent the following day at work completely fixated on it. I obsessed. I flipped through those shots on my phone, zooming in and out while I wracked my brain over whether or not I’d ever seen this lump before. I questioned whether it was maybe just an unremarkable part of her body, or whether it was perhaps a trick of the light and didn’t even exist at all. But it did. When my daughter woke up the next morning, I peeled off her pajamas, and there it was — that small yet unmistakable lump, firm under my touch.

We quickly learned that “suspicious new lump” is the secret password to getting into the pediatrician’s office in no time flat; as soon as we hung up the phone, we piled into the car and headed to our clinic. After a series of questions and an examination, our pediatrician made a call to the children’s hospital just down the street, and told us to go immediately — she’d ordered an ultrasound, and they were expecting us. Now, don’t get me wrong, fast service is the best service, as a rule, except in matters of mystery lumps. The fact that we were being seen on such short notice by a string of people in such rapid succession did nothing but make me worry more. A doctor’s bedside manner can be impeccable, and I’ll still be able to pick up on the emerging urgent tone in their voice.

Related: 7 Childhood Illnesses & Accidents: How To Treat Them At Home (And When To Go To The ER)

Twenty minutes later, we were sidled up to a bed in a darkened room while an ultrasound technician rolled her wand over my tiny girl’s back. Three weeks after that, after the ultrasound results had come back worrisome, we were back at the hospital once again — this time for an MRI. Sitting in an inordinately lit room down some never-ending corridor inside that monstrous hospital building, we shook the hands of a team of doctors and anesthesiologists. We signed a plethora of forms. And we watched our 10-month-old baby be dressed in a hospital gown before she was hooked up to an IV line that fed her the cocktail that took her under. We watched her slip out of consciousness, we kissed her sweet face, and we watched her limp little body be wheeled down the hallway and away from us.

Over the span of that hour and the days that followed, I crumpled and fell; I’d never cried so hard in my life.

It took three arduous days before the results were returned to us — the answer we’d so desperately been waiting for — that the tumor was benign.

The nightmare that had gripped us for a month had ended. We were told that the likelihood was that that little lump would stay with her for years to come and that it’d probably shrink to extinction sometime around her fifth birthday.

She’s four-and-a-half now. It’s smaller than it was, but it’s not gone yet. Harmless though that lump is, a powerful reminder it will always be — of our mortality, of the uncertain nature of our comfort and safety, and of the miracle of my daughter’s life. In the days and weeks leading up to that blessed good news, I was more afraid than I could ever put into words, waiting with bated breath with no knowledge of what our future would hold. How thankful I am I'll never be able to communicate adequately — but suffice it to say that not a day goes by that I don't visit that lump, give it a pat or a kiss, and give thanks for my girl as I recognize the free pass we were given on December 30, 2013.

If you like this article, please share it! Your clicks keep us alive!
Tags
parenting
Cancer
tumor
health
gratitude