Why Is Nobody Talking About The Horrifyingly Terrible Threes? 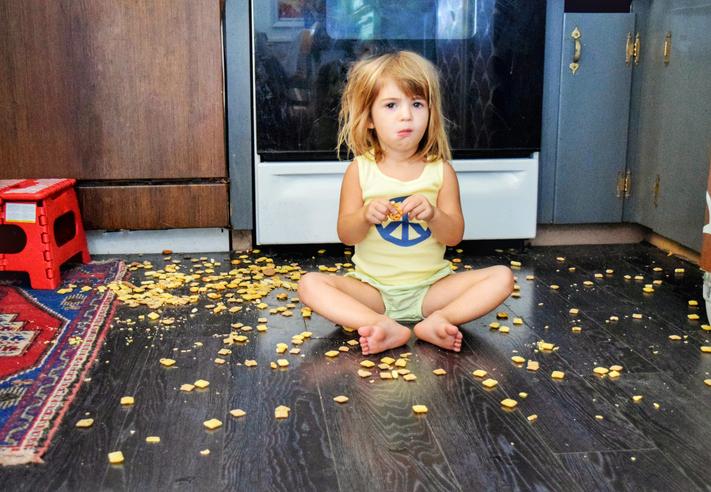 Would I relive the entirety of her year as a three-year-old just to revisit all that divine curiosity, joy, and chaos that I know I’ll always miss? Hell no. That’s a hard no.

So I don’t know how this happened based on the amount of junk mail that shows up in my mailbox every day, but I somehow missed a really important parenting memo. Perhaps you received it, or perhaps you were left in the dark as I was — left to stumble upon this information, left to your own devices, with nothing to do but forge onward because there’s no other direction in which to travel. The information I’m referring to, of course, is the very fundamental concept that while, yes, two-year-olds are at times horrifying little monsters who create more work for you than you ever dreamed possible, there exists something far worse: the terrible threes.

A three-year-old will take one look at haggard old you, you poor, tired thing, and will hock a loogie in your face before giving you a swirly in a locker room bathroom — all while laughing maniacally.

I kid you not: whoever is responsible for coining the term “terrible twos” and leaving the entirety of the threes out of the equation is sitting at the very top of my shit list. Because a little warning would’ve been nice.

The year was 2015. There I was, having just conquered the first two years of my daughter’s life, celebrating that beautiful milestone that was the passing of what I’d understood were the worst and most harrowing times. It occurred to me, though, that I’d actually had a lot of fun with that toddler of mine!

She was chatty, she was mischievous, and she was sweet. And while the temper tantrums certainly flowed freely from both of us, I couldn’t help but look back on the year prior and feel a great sense of accomplishment, not to mention scoff a little bit at what all those people were on about when it came to the horrors of toddlerhood. I really didn’t think it’d been that bad.

Enter the threes, though... the God-forsaken threes.

My child at age three... It was a never-ending circle of Hell and cat poop and puddles of water on the floor.

I think we as mothers, particularly if we’re parenting our last baby or our only child, have a penchant to throw on those rose-colored glasses and look at the milestones we’ve conquered and wistfully dream of a rewind button, a pause button or some other means of really getting back to the time when our babies were babies, and hooking an IV line into our arm. We want to savor it all because we know this is the end. Except there’s one really important aspect to all this: there is nearly nothing in this world that could make the opportunity of a time-travel machine worthwhile when we’re talking about the Terrible Threes.

Hear me out, here. I’ll be the first one to tell you that there’s maybe nothing more lovely in this universe than my daughter’s wild giggles, her beautiful smile, her thoughtful questions, and even her insatiable desire to make joke after joke about buttholes. (How many jokes about buttholes can there be, you ask? Not that many, I assure you. It’s mainly just one on repeat.) The three-year-old version of that girl of mine was pure wonder, and I’ve adored her always. But would I relive the entirety of her year as a three-year-old just to revisit all that divine curiosity, joy, and chaos that I know I’ll always miss?

While my daughter is all smiles and sweet affection, she is equal parts fiercely independent, curious to a fault, and forever convinced that she knows just as much about this life as I do. It’s just a touch irritating every now and again. JUST A TOUCH.

And what was she like as a three-year-old, you ask?

…Where do I begin?

Do I start by telling you about the time she ran full-tilt toward a four-lane street during rush hour and made me chase after her with all the fervor of an Olympic hopeful while I had the flu?

Or do I begin with the story of the time she scaled two different shelving units two days in a row to help herself to a pair of scissors, only to gift herself with a perfect Euro-mullet on Day 1, then transform it into more of a Moe-a-la-Three-Stooges look on Day 2?

The three-year-old version of my daughter was a force to be reckoned with. She would insist on dressing herself (GREAT), washing her own face (FANTASTIC), and brushing her own teeth (GET IT, GIRL.). Except that I’d find monstrous blobs of toothpaste dejectedly dotting the sink once she was done — whether any of it made it into her mouth, I’ll never know — and that girl could waste more water than I knew was possible.

She’d hit. She’d holler at me in the middle of the night as if I was her butler and her legs had stopped working. Getting anything done in the house meant washing a single glass in the sink before hearing those familiar sounds of her flinging poop and kitty litter around in the cat’s litter box, then rushing to get her cleaned up, then rushing further to clean the litter box, only to then hear that familiar sound of running water as she’d sidled a chair up to the kitchen sink to “wash the dishes."

It was a never-ending circle of Hell and cat poop and puddles of water on the floor.

Did I love my three-year-old daughter with every fiber of my being? Yes. Did I fervently adore every moment I got to spend with her little spitfire self? Not even a bit. That child flew out of my body, blossomed into a never-sleeping, always-eating wildling who for the first two years of her life cemented my belief in miracles, and who by year three confirmed my suspicion that Hell is real and it is here on earth.

She’s four now. She still hits every now and again, she still hollers at me like I’m the hired help and she is certainly still working on growing out that hairdo she gave herself last year. But we’ve hit a new stage.

She’s mature; she dines on caviar and brie. She appreciates a good Bordeaux and her political commentary is generally... oh forget it. I can’t keep this up.

You and I both know she has peanut butter on her left ear and worm guts under her fingernails. But she’s four now, and that’s all that matters.

I kissed those God-forsaken threes goodbye before I skipped off into the sunset. Why is it that nobody talks about this never-ending nightmarish chunk of time? Maybe it’s because we want to forget it ever existed at all.

If you like this article, please share it! Your clicks keep us alive!
Tags
parenting
terrible threes
terrible twos
toddlers
behavior
raising kids