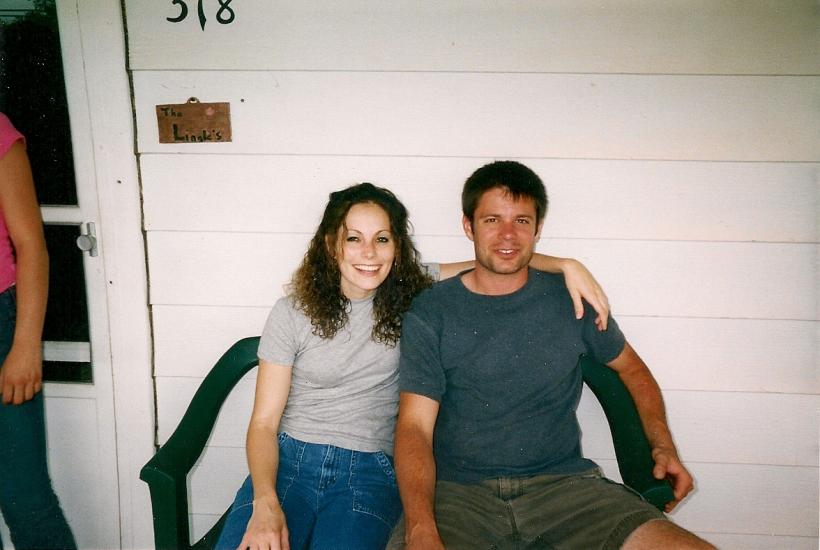 Jennifer Herbstritt (sister) and Jeremy Herbstritt on their aunt's front porch. (Courtesy of the Herbstritt family)

CN: death of a child

While planning to have a child of my own, I spent hundreds of hours listening to accounts of parents who had lost theirs to school shootings. The horror of their stories crept inside me. And as I spoke with them about their experiences, my journey towards parenthood naturally intertwined.

I often asked myself: What would it feel like to parent a child who later died unexpectedly in a school shooting?

A rhetorical question for me, but not for Margaret Herbstritt whose 27-year old son, Jeremy, a Civil Engineering Graduate student, was shot and killed at Virginia Tech on April 16, 2007. When I first connected with Margaret, I was mesmerized by her willingness to talk to me about Jeremy’s life and death.

She allowed me to ask her what Jeremy was like as a baby. I asked her about his dreams. She let me in — allowed me to coach her to develop a personal narrative from her answers. Her vulnerability made me sob as I organized her responses into paragraphs, into story. As I provided a structure for her essay, I wondered what it would be like if someone asked me those same questions. I also cringed at the thought I’d have to, at some point, talk to my child about school shootings. Perhaps in another life. Perhaps in this one.

Through a series of email exchanges, she explained that as a baby, her Jeremy was energetic, requiring little sleep, and very short naps. "He was a very happy child, with a sense of humor and a contagious laugh. He always wanted to go outside to play, regardless of the weather. I remember one particularly cold and snowy winter day when I dressed [him and his sister, Jennifer] in heavy winter gear and pulled [them] in a sled around the neighborhood."

You Might Also Like: I Know How I’m Going To Talk To My Daughter About Sex, But Not About Guns

How much her description of her children’s snow day reminded me of my own as a child. That nostalgia prompted hope within me. God willing, I’d be able to have those snow days with my little one. I imagined Jeremy and his sister: noses red from cold, their thick snowsuits flecked with snowflakes, and the white, wintery air blustering past them. A family, whole.

"At age five years old, Jeremy had surgery to fix a hernia he had since birth. While waiting for his surgery to be completed, I heard an overhead page ‘Code Blue in OR.’ Being a nurse, I recognized that as ‘patient unresponsive, not breathing.’" Shortly after the code rang, Margaret learned that Jeremy had a reaction to the anesthesia and was in a coma. "An ambulance arrived to transport Jeremy to Akron Children’s Hospital, where he lay motionless for six days. I stayed at his bedside. I prayed, cried, talked to Jeremy, put my hand on his chest to feel breathing. I was not allowed to hold him."

Jeremy would later wake from his coma, but he had a hard road ahead. He was in a wheelchair and had to learn how to walk again and use the toilet. Margaret shared she had to tell him that Jennifer was his sister, and even point out his dog Spot. "At times, during recovery, Jeremy would stare off, looking puzzled or even confused. Those times he would become angry, make very loud sounds, and throw objects."

Could I be there for my child as Margaret had for Jeremy?

I was terrified to answer that question and paralyzed by what life could bring. But later in the writing and interview process, Margaret told me stories of days like working in the garden together with Jeremy, something he loved — a type of hands work I too also love. As we got closer to the end of our work together, though, my anxiety manifested in different ways. I had a dream about Jeremy. I’m in his garden, and it’s flourishing. The smells are alive. The birds, all colors watch from the fence. He smiles at me.

A few weeks later, I found I was pregnant. Was the dream a sign of my inner garden? Was he telling me to keep going, knowing I doubted if I could go on? Was he referencing my learning curve as a woman trying to become a mother?

There were always more questions. There were the ones I asked Margaret about losing Jeremy, and then the ones born from her answers that I asked myself, privately. Is that part of the journey of parenthood — questioning? And like the questions I ask my child, still in the womb, are you OK in there? Are you happy? Safe? Will you be safe? Have I been good to you today?

Margaret shared that she too [talks] to Jeremy throughout [her] journey. She writes, "[I ask him] for guidance and direction... At the end of each day, I always ask myself: did I make a difference in the life of someone today? Did I perform my best at work or home, without complaining of trivial stuff?"

Working with Margaret brought out my fears as a future parent. What if my child was born and then years later was killed violently and suddenly? How could I ever cope with the not knowing surrounding their death?

What would I do with all that grief? And then I felt intense guilt for entertaining these worries. After all, I had my baby. Safe. Close to me. Under my heart. I wasn’t fit even to grow these questions. But they grew anyway.

One of them, strong, forced its way into my consciousness: How could I survive my child?

In the last paragraph of her essay, Margaret thinks of Jeremy as a bird. "Forever, when I hear footsteps, when I see a red Jeep, when I see a cardinal, I think of Jeremy." These last words reminded me of the question Anne Lamott asked in her book, Bird by Bird: "How alive am I willing to be?"

I began to realize, as a parent in becoming, there would always be more questions. And I’d have to be OK without knowing the answers. It was this realization that confirmed my willingness to parent. Margaret was my proof — asking her questions every day, participating in life despite the darkness. How beautiful it is to think of Jeremy always, his cardinal wings above the vegetables. To talk to him, ask him, did I make a difference in the life of someone today? Even if he doesn’t answer back, even if he does.

If you like this article, please share it! Your clicks keep us alive!
Tags
school shooting
death of a child
grief
parenting
loss
guns