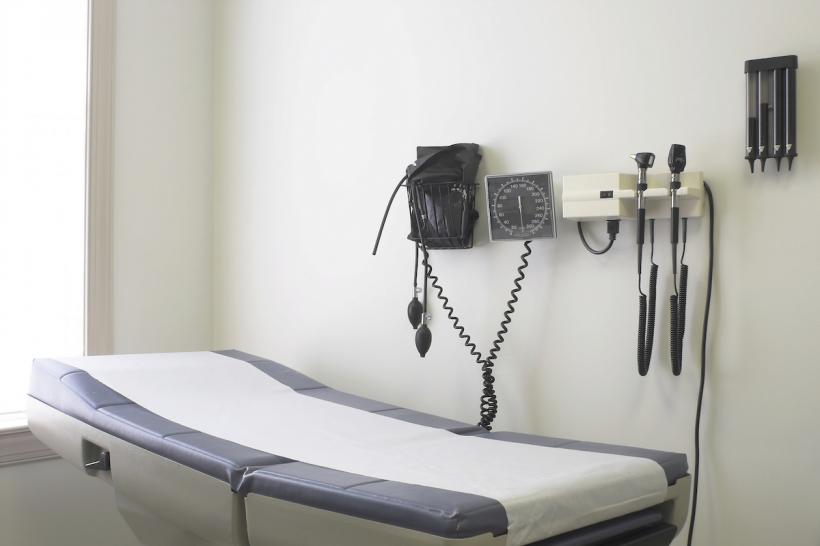 He wasn’t the first doctor to tell me I needed to lose weight. (image: flickr/ nafis zebarjadi

Being told you're super fat can make you feel extremely small.

I was in the doctor’s office sitting across from a little white man, who probably weighs a buck fifty soaking wet, feeling outside my body as he told me that the reason for my recent weight gain is that I probably "eat too much pizza." I wondered if I should ask what definitively constitutes "too much pizza," because I hadn’t been aware that any amount of pizza consumption could be a medical diagnosis, but instead, I pretended to agree, nod, and smile with whatever he was saying, mirroring a feigned look of concern.

At that moment, it took one doctor just 30 seconds to destroy a couple of years’ worth of fat acceptance I had steadfastly worked on, in an ongoing effort to love all of my new curves and rolls.

The doctor grimaced at the number that indicated my weight and frowned as he asked how old I am.

I responded. And with a furrowed brow, he continued.

Some days I'm one of those fat people who isn't thinking about being fat all day long. Other days it’s the only thing on my mind. But most days I can guarantee that other people are thinking about my body for me.

So not only was I "morbidly obese" (the diagnosis written next to my name under a column on his chart) but pretty soon, I would be way too old to "fix" it.

He reiterated that idea, telling me, "It’s all about calories."

I sheepishly murmured something about working out more, but he dismissed the idea that exercise could help me lose weight, claiming it didn’t matter.

He asserted that an hour of working out was equivalent to eating one bagel, then went on to explain calories to me — as if I hadn't started counted calories the minute I realized that being the funny fat friend wouldn't be enough to get boys to like me. Or as if being big and black hasn't been a lifelong affliction, one that has lead to yo-yo dieting, abusing diet pills and amphetamines, and literal starvation.

I had come to the doctor for an annual physical, but I’d also recently gained weight, and although I was all right with it, my friends and family — specifically my husband — had become increasingly concerned, so I scheduled an appointment.

This man had not asked for one single symptom regarding my well-being. The only information he had was a number on the scale and the fact that it has gone up. This seemed to be enough for my doctor to "bet his entire salary" that my weight gain was a matter of calorie intake. Just from looking at me, without any regard to my mental health, or taking into account the fact that I suffer from depression and anxiety — which was written on my chart. The entire visit felt irresponsible to me.

He wasn’t the first doctor to tell me I needed to lose weight.

The first time, my mother was in the room with me. A registered nurse, my mother shielded my ears as the doctor told her that her 13-year-old daughter should get control of her weight. She fought back in the most polite way possible, as soon as he finished explaining that it wouldn't be "attractive" for a young girl to carry around all this extra weight as she blossomed into being a full grown woman.

I didn't realize at the time that she was building up my confidence to say “Fuck the Haters” because I was just this chubby fat kid who was somewhat oblivious to the idea that being fat was a bad thing. It wasn't until much later that I figured it out.

I can still remember the first time I realized that there was a negative correlation between being fat and black.

We were in middle school, and as we got older, my invitations to sleepovers began to dwindle. Boys were becoming a topic of interest, so all my so called friends allowed their lack of attraction to the only black girl in the cool crowd to cancel out my invitations. One of these nights I got a phone call. We all loved prank calling. But this was the first time I was on the receiving end of it. I could hear giggling and for a minute thought maybe they had simply forgotten to invite me. So I laughingly said hello.

Then I heard it. "Did you know that you're fat..." and a short pause,  "and you're black." Then there was shushing, and the phone went dead.

The discovery that I had been labeled "morbidly obese" made me feel a lot of different emotions, and reminded me of all the times people made me feel shitty for being fat. After leaving that appointment, I felt worse than if I had never walked through those doors at all.

Why had I paid a physician a $20 copay to fat shame me, with a diagnosis of nothing more than "stop eating pizza"?

On the way home, I found some tacos that made me feel way better and washed them down with a margarita. I texted my husband. He was just as worried as my doctor, despite the fact that I had spent the week prior explaining to him that there was little correlation between health and weight, and obesity was a myth. But now I felt as if a doctor’s words held more weight than mine, and I didn't really have a thick thigh left to stand on.

I felt immense shame. When my husband got home that night, I left the house because I didn’t want him to have to look at his "morbidly obese" wife. I felt very alone; despite what I had spent so long telling myself, this doctor had again reconnected my self-worth directly to my weight.

But guess who never made me feel fat and worthless? Pizza and beer.

So that's where I found myself: crying over a glass of Dank Mosaic IPA and a slice of pesto Margherita pizza. Sam Cooke played in the background, and I was happy again.

Within the last year, I have gained sixty pounds. Three years before that, I quit abusing prescription amphetamines and gained forty pounds. As my body continues to evolve, there have been a lot of adjustments I have had to make, both mentally and physically. As a person who is managing depression and anxiety, I sometimes use food as a means of comfort.

For some reason, Sam’s crooning and the trumpets brought back my self-worth, and the pizza made me feel whole again. You can be fat and healthy, despite what this doctor was insinuating. And you can be happy and fat, despite what my inner thoughts were telling me. Now I try and remember that I love my body, even though it feels like the rest of the world hates it, and wants me to hate it too. That path to self-love does not involve restricting entire foods forever. On my journey, pizza is equivalent to happiness.

I'm learning that there are so many factors contributing to the fatphobia I face, and that I’ve internalized them more in my new body.

Right now, I’m working on improving how I feel without obsessing over my weight, and I'm still learning all the ways I can embrace my existence in a fat body, through movement, being mindful, and approaching my fat in a healthy, non-disordered way.

There’s this consensus that because someone is fat, they don't give a f*ck about their body at all. There's this idea of being a "good fatty" that requires fat people to adhere to wanting lose weight or constantly diet. There are also fat people who just want to exist in their bodies and enjoy their lives.

I am a "bad fatty" because I choose live my best life and I don't think that means suffering through an existence without joy. Pizza is joy. Some days I'm one of those fat people who isn't thinking about being fat all day long. Other days it’s the only thing on my mind. But most days I can guarantee that other people are thinking about my body for me. I'm expected to hate my body, and I don't. But I would like to treat it better and right now I am not sure what that means but I want to find out.