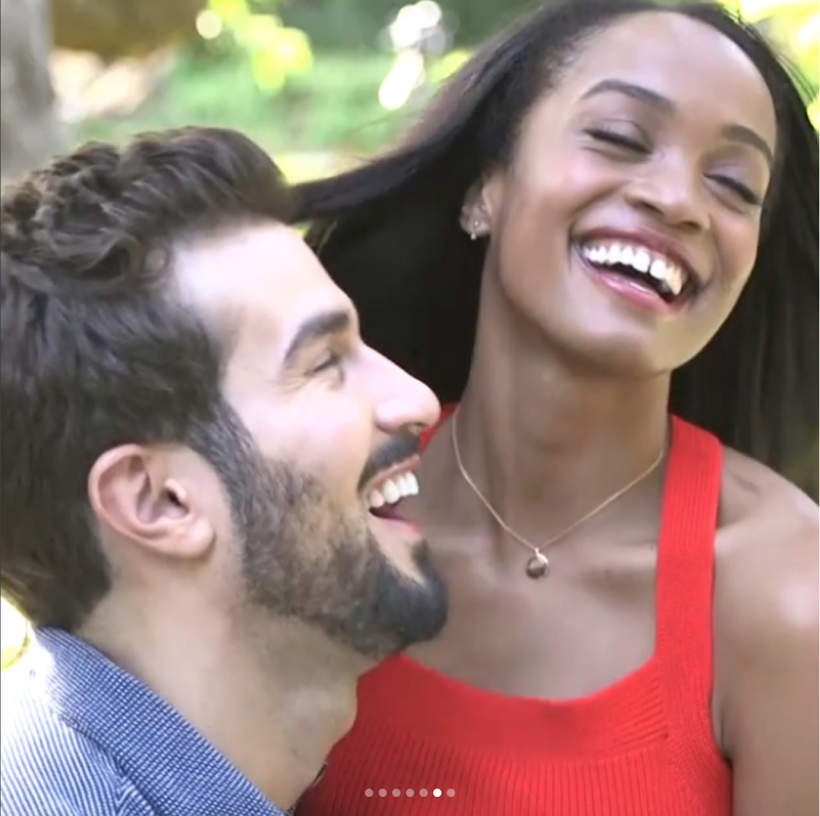 Rachel is wearing a gorgeous metallic gold ballroom gown with a slit down the thigh, but she’s questioning Bryan’s proposal. (Image Credit: Instagram/bach21squad)

Rachel is just slaying my entire existence in this finale episode of The Bachelorette. Every single look is on point and flawless. She’s the first bachelorette to watch the finale live with host Chris Harrison, and give commentary on what exactly went down as we see the footage.

We start off with Peter, who looks dumb talkin bout “what if I am not ready for an engagement...blah blah blah.” Then why are you even here, bro? Rachel doesn’t even wanna hear it, and Peter is trying to talk slick. She is holding tight onto the engagement, and Peter is saying he is still looking for something more.

Then suddenly it seems she is falling for Peter, uncertain or not, and Rachel says they are both falling for each other.

So they get a card with a key in it, and it says they’re going to get a secret room. They walk into the room, and I’m wondering why it looks like a run-down AirBnB on this ABC budget. But whateva... When in Spain, I guess. They toast their champagne glasses and we end the date with the insinuation of coitus. His shirt is off and she’s cooking him breakfast, and ends with Peter on the walk of shame.

Then Bryan rolls up for her next date. He and Rachel are in a vineyard, and he is looking like a literal knight on a white horse here to collect his woman. But all of the sudden, we see Rachel disconnect from the man she’s spent the entire season lusting after. We get a picture in the live reaction to how she is feeling.

We fast forward to Rachel’s dinner date. CAN WE TALK ABOUT THAT SHOULDER PADS AND FRINGE COMBO. I literally bought a vintage top this week of a similar design. I am gagged by the sheer excellence of this outfit. Blanche Devereux meets Gothic Chiquita banana.

But all that slayage was only a preface to giving Bryan a key to the fantasy suite. This suite is so much more upscale than that shabby-chic dump they gave Peter and Rachel. Then we see Bryan’s walk of shame. We see a disheveled Rachel Lindsay, with her hair all tossed, being scooped up by a shirtless Bryan while she giggles in her robe. I swear, she even seems to be walking crooked. As much as I dislike Bryan, I would totes smash.

Now we are down to one of the last rose ceremonies. Eric is finally being sent home. I have wished for his demise every single week, but now I kind of feel bad. I think ABC made a good choice in waiting until this last rose ceremony to get rid of Eric, but it was also unfair. It never really felt like Rachel was genuinely interested in him; there were no sparks or chemistry, but race ultimately played a factor, since she was very concerned about being judged for picking all-white finalists. 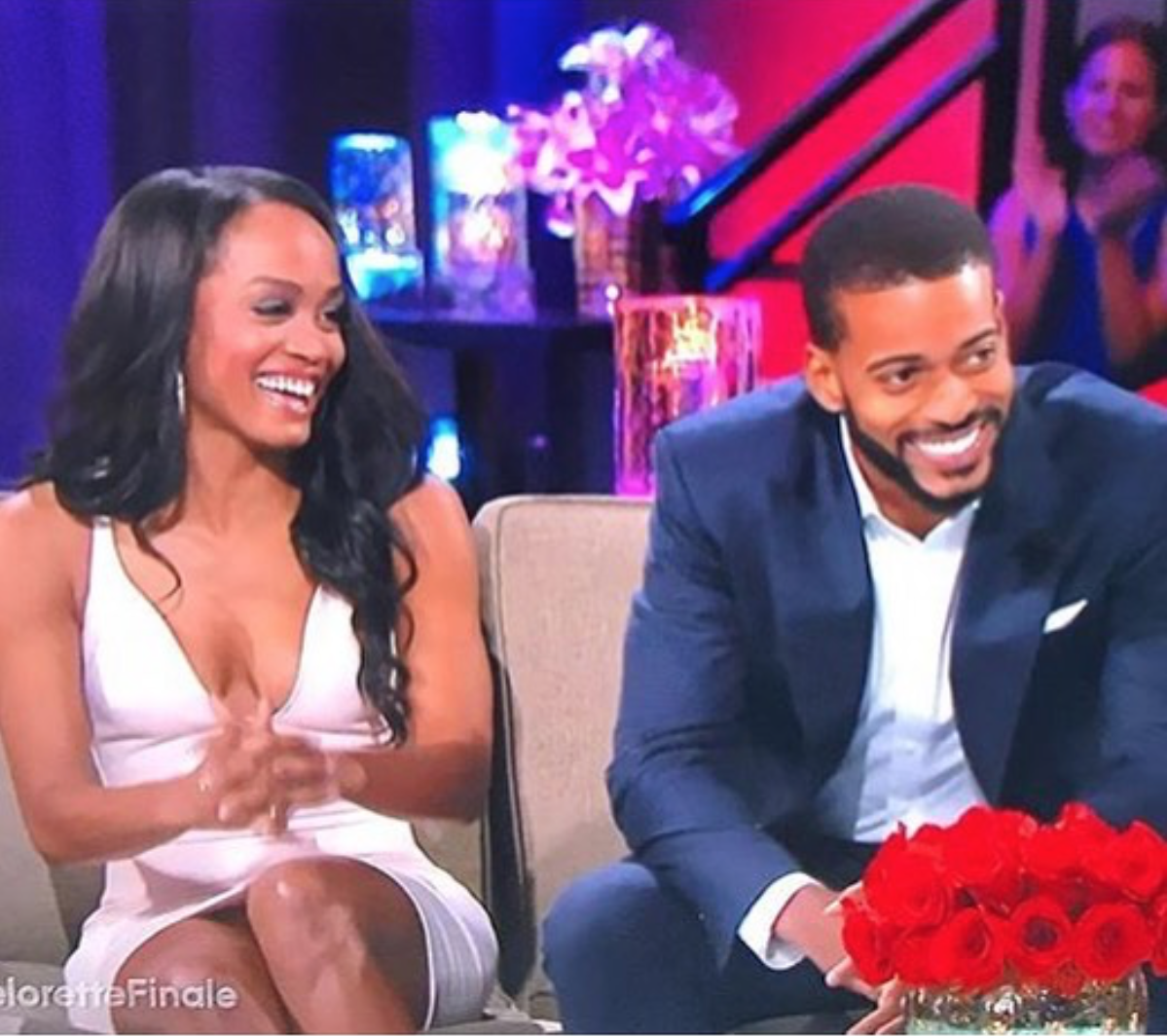 Eric had never been in love, and I’ve said it before: Ain’t nobody got time for that rookie shit.

Rachel and Bryan find themselves in Rioja, Spain, walking towards each other in slow motion in an open field during the sunset. They take a steamy hot air balloon ride through the town, and if I were Rachel, I would’ve let him impregnate me in that wicker basket. Give me all the romance.

The next date is with Peter, who keeps insisting that he is “falling in love” with her. There is WAY too much doubt.

He’s breathing heavy and sighing all dramatic, talking in generalities when he should be head-over-heels by now. This is so frustrating. And Rachel agrees.

Peter is refusing to propose to her, and she is practically begging him to be with her. I would be furious if I were her; as it is, I am sooo mad. They really got Rachel out here looking dumb because Peter doesn’t want to propose. Y’all, my blood pressure is on high. They are talking in circles, and now Peter is leaving.

But wait, he’s not leaving. Rachel can’t say goodbye, but she’s leaving. They’re so in love. She loves him so much. They both say "I love you," and now they’re both sobbing. I am crushed for both of them. Totallly wreckt. He tries to sway her and even goes as far as telling her he hopes she has a mediocre life.

Why did this man even go on the show, for real though. What a waste of my damn time.

So we sit down with Bryan, I am still in denial about Peter. The jeweler shows up, and Bryan picks out a teardrop diamond with an encrusted band. They are now at the top of a windy mountain.

Rachel is wearing a gorgeous metallic gold ballroom gown with a slit down the thigh, but she’s questioning Bryan’s proposal. Bryan says the same thing he said to her when he first stepped out of the limo: you look spectacular, in Spanish. And now for the proposal. Rachel is talking about how she did soul-searching to come to the conclusion of their love. There’s some hesitation before she says yes to his engagement.

Their engagement is trash. Rachel admits that she cried her lashes off for Peter, yet less than 24 hours later, she is getting engaged to Bryan. I hope that Peter is our next Bachelor, and the rest of the country agrees. This finale did not need three hours to tell us what we all kind of all knew would be the outcome if Peter couldn’t make up his mind. This was not how this was supposed to end, but here we are. I hoped they would put aside their stubbornness for the sake of all the emotions we saw between them, but alas, they did not.

On the couch next to Peter, Rachel insisted she was not living the “mediocre” life Peter said Bryan would provide. In fact, she proclaimed she was living her best life. But their time on the mountain top and on the stage couch felt mediocre at best.

Rachel Lindsay was the bachelorette we didn't deserve, and she deserved so much better than Bryan. Still, let’s hope she really did find what she was looking for... and lives happily ever after.

If you like this article, please share it! Your clicks keep us alive!
Tags
The Bachelorette
Rachel Lindsay
Love
trending
culture