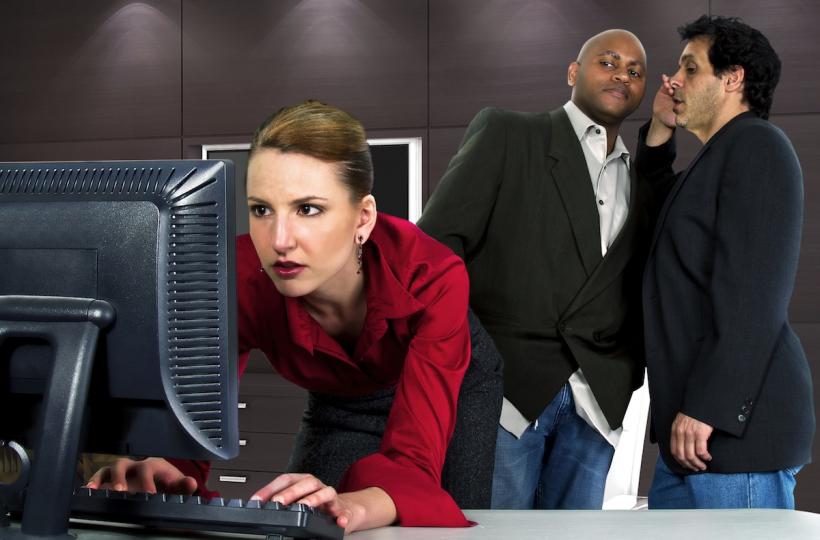 After learning I had been assaulted, it took the men who ran my company mere moments to decide that I was the problem.

There are few men who will defend their own sexism. Most of them hide out in the darkest corners of the Internet, posting memes and calling girls fat.

But in college I knew one of these MRAs in person. We played D&D together.

The guy, known as Rabbit, wasn’t happy when I joined the all-male party. He said having a girl around “ruined the experience.” But I’m pretty sure he was just mad that I wouldn’t let him play out his rape fantasies during the game.

Why didn’t my boss fire him? The same reason Brock Turner got a six-month sentence. The reason Harvey Weinstein kept making movies. The reason Donald Trump was elected president. Because part of him just didn’t believe my story. And the other part just didn’t care.

In general, I avoided interacting with Rabbit. He gave me the heebie-jeebies. But one night, as we were cleaning up, he started complaining that a woman had joined his team at work. It was summer and he had an important internship. He was afraid having to work with a woman was going to hurt his ability to get his job done.

“Just work with her like you would work with a man,” I said slowly, unsure how a person like him could even exist.

“Men can’t treat women like they treat men. It’s not possible,” he said.

When I asked why, I wasn’t ready for his response.

“Because women are fuckable,” Rabbit said.

“Not by you,” I shot back, disgusted. But I knew that’s not what he meant. He meant that, being a straight man, he had no choice but to sexualize his female co-workers.

He couldn’t treat women like people because we were, innately, sex objects to him.

Obviously, Rabbit was an asshole. But, at the time, I thought he was just a random loser. A year later, after landing my first big girl job, I realized just how wrong I was.

I was in Arizona, at a professional conference with a few co-workers. On the first day, we had a break in between sessions. So, a “friend” named Brian asked if I wanted to watch some TV in his hotel room. Brian was married and spoke well of his wife. And he had never hit on me before. So I accepted his invitation.

He had a suite with a living room area, so being alone with him didn’t feel creepy at first. But then he starting inching toward me on the couch, his arm outstretched along the back. And suddenly I knew what was coming.

He leaned in to “tickle” me and I jumped up, horrified. I tried to move toward the door quickly, but I didn’t want to turn my back to him. I had to walk past the bed to reach the door, and when Brian saw this he grinned. His eyes looked crazy as he rushed toward me. Like a football lineman, he tackled me onto the bed, laughing. To him, this was all a big joke.

“Get off me! This isn’t funny!” I shouted, wriggling so that he couldn’t pin me. He hadn’t expected me to outmaneuver him. (I had studied martial arts.) After a minute that felt like an hour, I rolled out from under him and gained the upper hand. When he lunged to push me back down, I punched him in the face as hard as I could. The stone in my ring cut him and he fell backward, bleeding.

I leapt from the bed and ran out of the room. I was shaking. I wanted to throw up. I wanted to kick to his ass. But mostly, I wanted to get to my room.

Once I was safe and had calmed down, I considered calling my boss. But I was afraid he wouldn’t believe me. There were no other women on the trip and I had no idea what to do. So I just got changed for dinner.

When I got to our team’s table, I saw that Brian had bandaged his face. Our boss noticed, too.

“What the hell did you do to yourself,” he joked, already a few drinks in. My heart jumped into my throat. Now! I thought. Tell them what he did!

But I was frozen. And Brian was already laughing it off.

I felt sick and just stared at him. He avoided my gaze for the rest of the meal and I excused myself from the table early.

I kept my head down and avoided Brian for the rest of the conference. Once I was home, I wrote up my resignation letter, including a full description of his attack.

As my manager read the letter on Monday, his face fell. But he looked more nervous than concerned. He didn’t ask if I was OK. He just mumbled an awkward apology and told me to wait at my desk.

A few moments after I’d returned to my seat, he came by with a box.

“Put all your stuff in here. You need to go now,” he said.

The company offered me a severance if I agreed not to sue them, so I took the deal and was escorted out. I was sad that I wasn’t allowed to say goodbye to my friends, but I was happy I would never have to see that bastard Brian again.

Since that day, I’ve seen Rabbit’s fuckable comment in a different light. Sure, his perspective is disgusting. But he isn’t alone.

After learning I had been assaulted, it took the men who ran my company mere moments to decide that I was the problem.

Not Brian. They had me out of that office in less than 30 minutes. But Brian kept going to work every day, no worse for wear.

Why didn’t my boss fire him? The same reason Brock Turner got a six-month sentence. The reason Harvey Weinstein kept making movies. The reason Donald Trump was elected president.