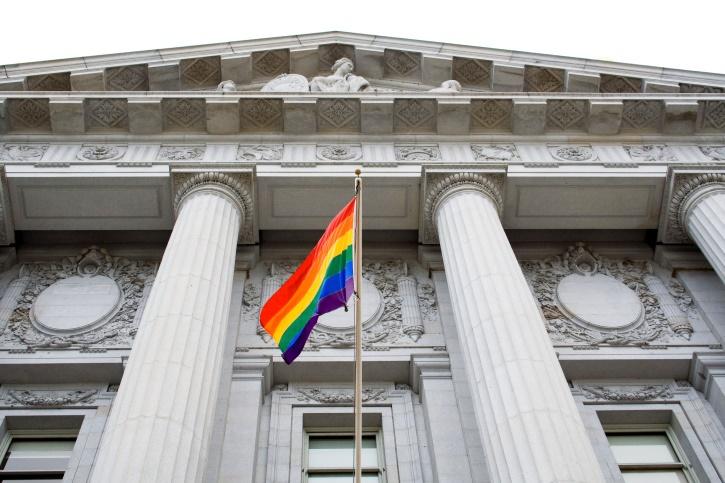 Last fall, we told you that the Supreme Court of the United States would confront gay marriage head-on in the near future. And well: that future is here.

On April 29, Obergefell vs. Hodges hits SCOTUS for 2.5 hours of argument, and people are literally camping outside to earn a coveted spot in the courtroom for this history-making trial. The trial is expected to last until June.

To help you sound well-read at happy hour tonight, here are five quick facts to know about the case:

1. Wait, who are Obergefell and Hodges anyway?

James Obergefell is the partner of (now deceased) John Arthur. The two Ohio men began dating in 1993. Sadly, Arthur developed Lou Gehrig's disease (the ice-bucket-challenge cause) in 2011, and the pair desired to marry before Arthur's inevitable death. Because they couldn't legally marry in Ohio, Obergefell and Arthur journeyed to Maryland, where gay marriage was legal, in July 2013. Family and friends had to help raise funds so Arthur could travel safely (sidenote: they got married in a plane in Maryland).

When they returned to Ohio, they worked to get their marriage officially recognized in their home state. Arthur died that fall, long before the case got underway. Now, Obergefell wants to be recognized as Arthur's spouse on the death certificiate. And that case has landed at the Supreme Court.

Richard Hodges is the Director of the Ohio Department of Health. He is in charge of death certificiates.

2. What happened to all the other lawsuits?

Obgergefell vs. Hodges actually involves three other same-sex marriage cases as well: Tanco vs. Haslam (Tennessee), DeBoer vs. Snyder (Michigan), and Bourke vs. Beshear (Kentucky). All four of the states represented in the SCOTUS case are part of the 6th Circuit Court district (aka United States Courts of Appeals).

3. What is the central issue?

Because the legal system is complex, it's never a matter of simply "do we like this idea?" but of "do we like this idea, and how can we interpret the Constitution to support or disapprove of it?" Before the SCOTUS ase, there was a gay-rights case called United States vs. Windsor. To make a long story short, it ruled that the Defense of Marriage Act was unconstitutional because it violates the due process clause in the 5th Amendment (recap: the federal government must respect and protect the rights of its citizens—which includes gay people).

4. What are the (legal) pro and con arguments?

Obgergefell vs. Hodges is—in part—determining the definitions prescribed in US vs. Windsor. Did lower federal courts act accordingly?

See, pro-LGBTQ folks recognize that many states allow same-sex marriage. Simply put, they want equal access nationwide. They believe that the due process clause in the 14th Amendment (recap: same asthe 5th, but insists that all states are legally obligated to comply) allows them this right. Also, marriage is a right under the constitution, and SCOTUS cannot take it away willy-nilly.

The con side (to the best of our understanding) argues that the due process clause of the 14thAmendment does not allow marriage rights, despite the outcome of US vs. Windsor. Instead, they believe that gay folks are demanding that SCOTUS invent a constitutional right just for them. (Yeah, those gays are soooo entitled . . . wanting to get married and all.)

5. OMG. Can I watch this madness go down?