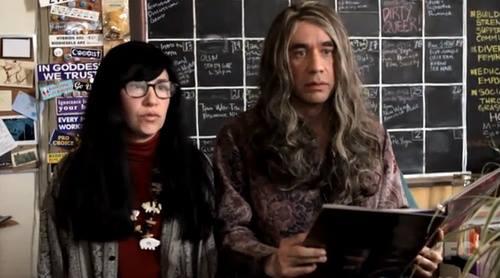 As we all know, progress does not march forth in beautiful, lock-stepped advancement like a well-oiled army; rather it trips and stumbles along, its boots muddy, its spirits flagging. Some soldiers dart forward—nimble and swift—deftly maneuvering around every grenade, IED and whizzing bullet. They are tenacious and triumphant. Then there are the soldiers that, well, get riddled with shrapnel and collapse into a ditch, writhing slowly and painfully until their last breath sighs from their cold, blue lips.

And then there are the soldiers that are, well, somewhere in the middle; they're making strides forward, but hopping on one leg.

One of these brave ephebes is the realm of literary criticism.

VIDA, a gender-equality-driven literary organization, recently inspected a whole host of publications—including the London Review, the New Yorker, the Times Literary Supplement, The Atlantic and Granta—across the United States and England. As it turns out, the majority of book reviewers and authors reviewed were predominantly male. London Review was especially bad, featuring 527 male authors and critics on their pages in 2014, compared with just 151 women.

Similar patterns appeared across the pond on the humble soil of the US of A.

Here's the more puzzling element of the U.K. gender disparity. (Other than the age-old argument that the books men are writing simply warrant more of a discussion . . . thus the male dominance in criticism is dictated by talent rather than systemic misogyny. Dubious!)

Anyway. The top-selling authors in the U.K. are female (among them are Hilary Mantel, Donna Tartt, and Kate Mosse). So without the presence of residual sexism it's hard to understand why women are so poorly represented in literary criticism.

I guess the silver-lining here is that reports like this shed some much-needed light on some seriously shadowy practices.

In other hell-yeah news, literary darling Tin House—a small publishing house based out of Portland, Oregon—has 12 lady and 8 male book reviewers. (No word yet on Toni and Candice's feeling on the matter.)