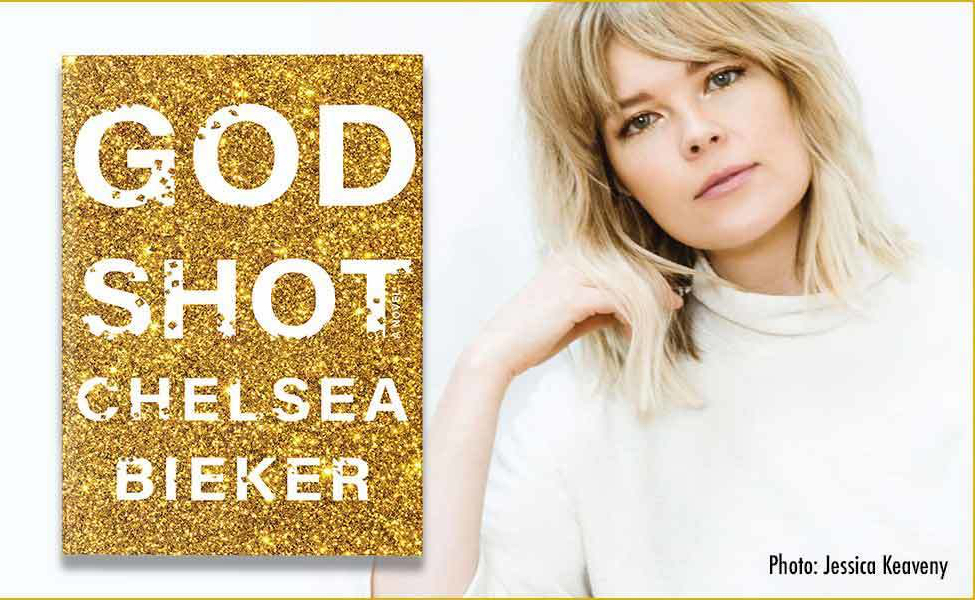 I was thrilled to chat with author Chelsea Bieker about her stunning debut novel, Godshot.

Drought has settled on the town of Peaches, California. The area of the Central Valley where fourteen-year-old Lacey May and her alcoholic mother live was once an agricultural paradise. Now it’s an environmental disaster, a place of cracked earth and barren raisin farms. In their desperation, residents have turned to a cult leader named Pastor Vern for guidance. He promises, through secret “assignments,” to bring the rain everybody is praying for.

Lacey has no reason to doubt the pastor. But then her life explodes in a single unimaginable act of abandonment: her mother, exiled from the community for her sins, leaves Lacey and runs off with a man she barely knows. Abandoned and distraught, Lacey May moves in with her widowed grandma, Cherry, who is more concerned with her taxidermy mouse collection than her own granddaughter. As Lacey May endures the increasingly appalling acts of men who want to write all the rules and begins to uncover the full extent of Pastor Vern’s shocking plan to bring fertility back to the land, she decides she must go on a quest to find her mother no matter what it takes. With her only guidance coming from the romance novels she reads and the unlikely companionship of the women who knew her mother, she must find her own way through unthinkable circumstances.

Possessed of an unstoppable plot and a brilliantly soulful voice, Godshot is a book of grit and humor and heart, a debut novel about female friendship and resilience, mother-loss and motherhood, and seeking salvation in unexpected places. It introduces a writer who gives Flannery O’Connor’s Gothic parables a Californian twist and who emerges with a miracle that is all her own.

Erin Khar: There is such a strong sense of place in Godshot. Do you see the fictional town of Peaches, California as another character?

Chelsea Bieker: Definitely. Place was so vivid and important to me in the writing of this book. The Central Valley of California is such a particular place to me and is often generalized or overlooked in media. I wanted to evoke the specific way it feels to be there; I have always felt that place so sensorially. The heat and the flat landscapes, and the smell of the farmland, the smoggy sky and the sun an ever-present feature.

Also, my experience growing up there was very tumultuous, which is probably why the place feels so recorded in my body. At the end of the book, Lacey May feels this way too, that it has somehow made an imprint on her that feels, while away from it, almost like a longing. Not really a longing for return, but for remembering.

EK: Something that really struck me is how well you convey the feeling of being trapped by circumstances. I can’t help but note how this is a bit of a mirror for what many may be feeling now, socially isolated during a pandemic. As a writer, to what extent did you make conscious decisions to create that sensation for the reader?

CB: I wanted the town and the cult specifically to feel very claustrophobic. I think that’s a sure-fire way for the tensions between the characters to implode and shift in interesting ways. They are bound to this place in ways that are rooted in poverty and geography but also spirituality. They could feasibly drive away, but then what?

Their world scope is very small, too small, and traumatized to imagine it as a real possibility. But, at the same time, there dwells the desire for more.

We see this with all the characters in their own ways. I think too when we are young there is not a lot we can do to remove ourselves from a bad home life. It’s a waiting game to adulthood. That in itself is very trapping. You just don’t have agency in a legal way yet. Your choices are limited and up to those around you.

I think in Peaches, California, places have shut down, they are essentially quarantined in a way from the rest of the world, and it creates maddening desperation. I’m sure many of us feel that way now on different levels: we have much fewer choices. We do not have the same freedoms in a very practical way that we did a few months ago. We are, in a sense, trapped by the things we cannot control.

EK: How much did you draw from your own life in developing the characters in the book?

CB: Some of the characters started with the seed of reality and grew, in some cases, into much beastlier and exaggerated versions, ultimately unrecognizable. But I think some of their emotional desires and experiences remained similar. That’s why the book takes place in a real region, but the town itself is fictional. I wanted all the freedom to push it to the limit and not be bound by the logic or rules of an actual town.

I like to draw from real life in my fiction, but that’s never where it ends. My characters are always funhouse versions who are their own by the end of things.

They are very fun for me to write. Daisy was a character, though, that felt in some ways dreamed up from another realm. I love the idea that characters come to us in these mysterious ways. I believe a lot of channeling and magic go into fiction writing. I can’t always lay down the technicalities of how it is that I do what I do or where things come from, and I love that element of mystery.

CB: I think the worst bit of advice from no one person in particular, perhaps it’s more of a collective idea I picked up, is that you have to write every day for hours at a time. You don’t have to do anything. I say, feel great if you’ve got one sentence down for the day. Oh, you wrote for twenty minutes, and then your kid woke up from a nap? Victory. I think some writers are very regimented, but I don’t relate to that at this time in my life, and the picture of the writer toiling at the desk all day with a bottle of whiskey is just a patriarchal idea that relied on a wife doing the cleaning and child-rearing. It’s definitely not my experience of writing as the primary caretaker of two children while also teaching full time. So the moral here is to celebrate small wins and don’t be crushed by overheated expectations of what your writing life “should” look like.

That said, I made a commitment to meet myself for at least one two hour stretch of writing a week. You’d be amazed at what you can get done in two hours if it’s your only two hours. It seemed like a parent with no childcare to speak of (which was mainly my situation in the bulk of writing this book) it was up to my partner and me to negotiate how I would steal away for writing time. But when it’s all you want to be doing, it’s not that hard to give up other things like obligatory lunches with people you don’t really want to go to lunch with. Taking agency over my time and not feeling a victim to it helped. Realizing that I had choices about where I directed my attention. Even if I could not write, I could read, and if I could not read, I could think about writing.

In a quote and more related to craft is a quote from Annie Dillard that I will just set here: “One of the things I know about writing is this: spend it all, shoot it, play it, lose it, all, right away, every time. Do not hoard what seems good for a later place in the book or for another book; give it, give it all, give it now. The impulse to save something good for a better place later is the signal to spend it now. Something more will arise for later, something better. These things fill from behind, from beneath, like well water.

Similarly, the impulse to keep to yourself what you have learned is not only shameful; it is destructive. Anything you do not give freely and abundantly becomes lost to you. You open your safe and find ashes.”

CB: I’m anxiously awaiting my order of The Knockout Queen by Rufi Thorpe to be ready for pickup at Broadway Books here in Portland, along with Temporary by Hilary Leichter, and very much looking forward to the stunning You Exist Too Much by Zaina Arafat. I mean, that title! Stunning.

EK: What are you most looking forward to when we can be done with social isolation?

CB: I guess I should say seeing friends or physically going to a bookstore (which yes and yes), but the first face I want to see is a Bryan’s Bowl at Porque No, my favorite restaurant in Portland. The cravings are so real. I would also love to do a live event. Seeing readers in real life is my dream. 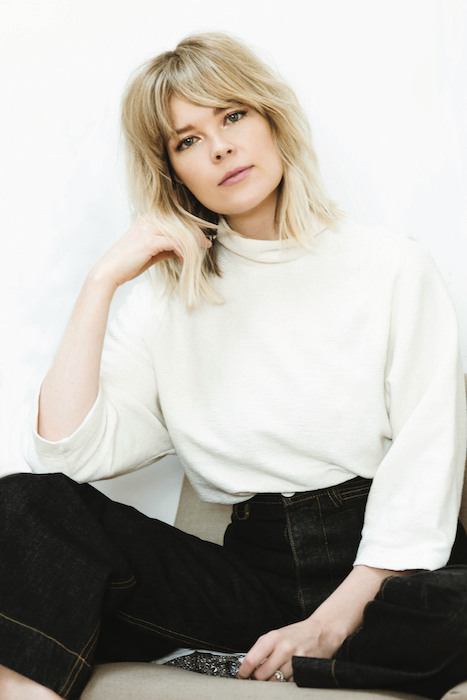 Chelsea Bieker is from California's Central Valley. She is the recipient of a Rona Jaffe Writer's Foundation Award, and her fiction and essays have been published in Granta, McSweeney's, Catapult Magazine, Electric Literature, and Joyland, among other publications. She was awarded a MacDowell Colony fellowship and holds an MFA in creative writing from Portland State University. Godshot is her first novel.

If you like this article, please share it! Your clicks keep us alive!
Tags
q&a
author
Books
novel
writing