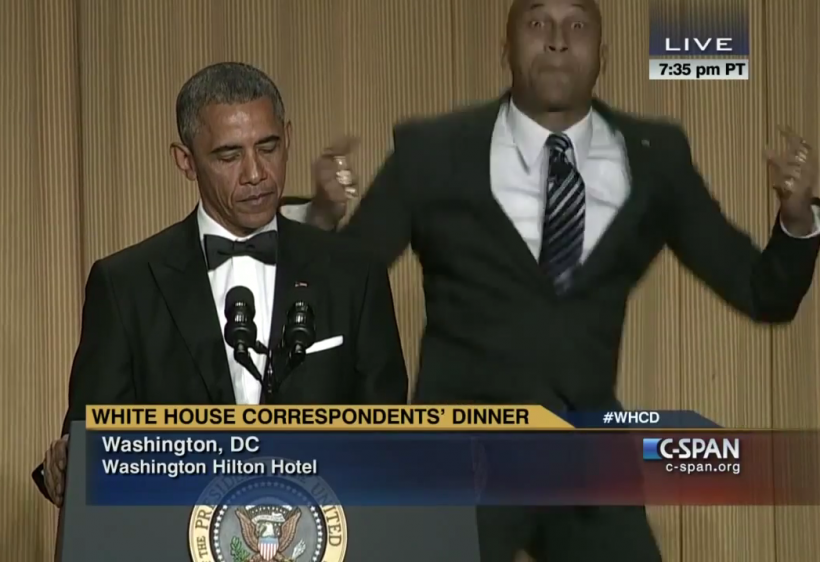 The Obama administration has been famously successful at reaching millennials—during the Democratic primaries, for instance, hip Obama t-shirts were peddled to college students (yup, I still have mine) and YouTube sensation "Obama Girl" (remember her?) was actually a culturally significant figure. The result of such efforts? In the 2008 election, 70% of first-time voters admitted they cast their ballot for Obama. (Sure, not all were millennials . . . but many were.)

Today, Obama continues to stay in touch via social media (or, at least, some intern stays in touch). And over the weekend, our charismatic leader continued to prove he understands millennials better than any president ever (which, to be fair, is not hard to do) by taking part in a cheeky video that's quickly gone viral.

During the White House Correspondents Dinner—a less formal gala with press and celebs in attendance—Obama invited his "anger translator" (named Luther) on stage to assist with a speech. The character Luther is played by Keegan-Michael Key, who embodies this role often as one-half of the popular Key & Peele sketch duo. During the bit, Key makes an angry zinger regarding a Ted Cruz campaign donor, then dives into climate change and looks as if he's about to explode from rage. At this point, Obama takes over and really starts to get angry—prompting Luther to jokingly tell Obama that he needs counseling.

This isn't the first time a president has made jokes to lighten a tense situation. Former President George W. Bush attempted to evoke laughs at the Radio and Television Correspondent's Dinner in 2004 with a video gimmick that featured him and his posse attempting to "find" weapons of mass destruction under office tables.

This, though, quickly sparked outrage, with many upset that he would try to derive humor from a situation that cost so many lives. Of 200,000 poll respondents, 54% said they felt the joke was offensive.

So why was this joke met with outcry, while Obama's has been mostly lauded? Perhaps it has to do with the object of the anger; Obama isn't making light of of the seriousness of climate change, but using humor to express his frustrations that more hasn't been done. The ultimate goal isn't to downplay a serious threat, but to shed light on it, which makes the light humorous touch more palpable.

In the end, the joke works not just because it's hilarious (it is), but because it starts to make you feel really angry, too. Which, of course, is precisely the point.