New Love Is A Bitch: Where Can I Fit All This Baggage? 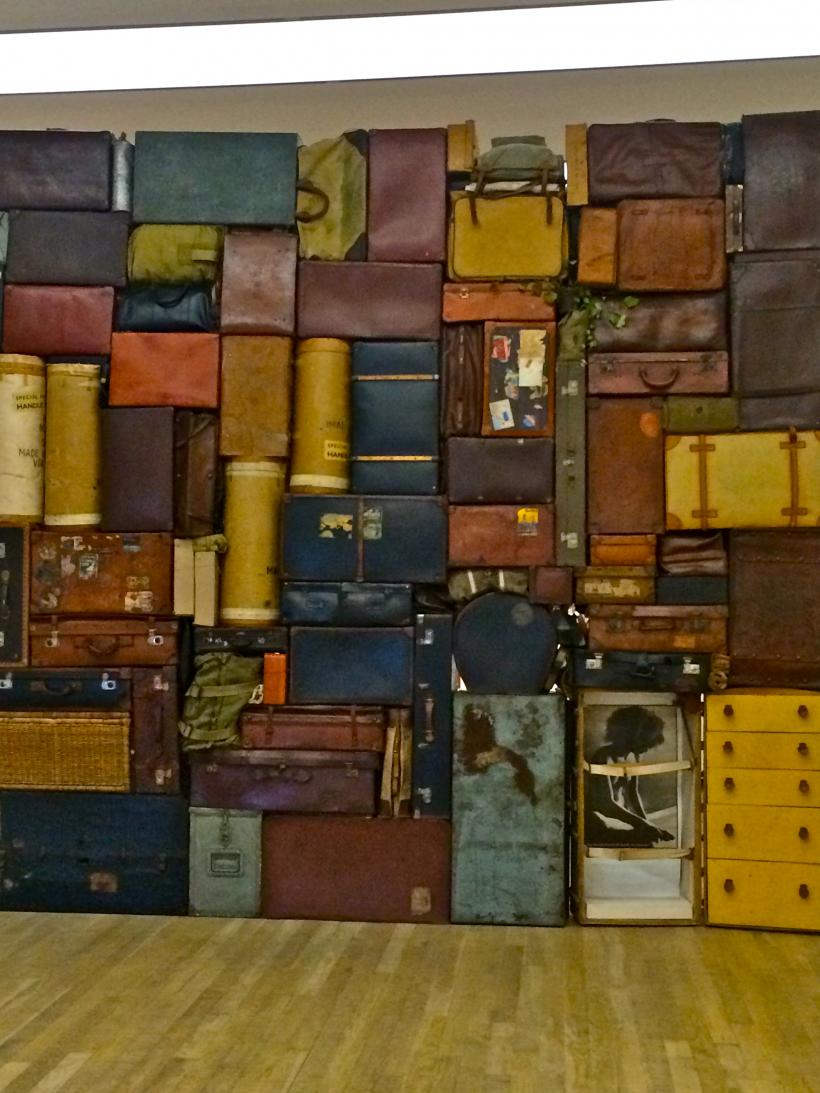 So here I stand on the edge of another precipice. And if you'll just indulge me in elaborating on this admittedly overused metaphor I can get a few things out of the way that have been weighing on me.

New love is a bitch. At least this time around.

I think I can remember a moment, nay, many moments when new love was the thing that turned my gears. And that proverbial cliff only served as a means to see the future, to gain perspective on the vast lands that I knew would be mine. I didn't gaze out across the vast prairie, riddled with shimmering trees clad in those impossibly light green leaves that only come from spring's new growth and think, "Damn, it's only a matter of time before the beetles eat that shit." I didn't lift my face to the sun, my nose to the wind and smelling that faint hint of rain humming on the horizon and think, "Shit, I better seek shelter, this dam's about to break and take everything with it."

I didn't squint into the shadows of the valleys, dreading to think of the scorpions, the rats, the cruel-teethed crawling things squirming in humid holes, hungry and smacking their jowls.

No. Years ago I stood there my chest proud as a crow. I felt my feathers slick and supple, iridescent, incandescent in the fading light. I knew that I but needed to lift my pinions and I would be aloft, ferried along without much thought except for the warmth awaiting me.

In short, there was no fear of the fall-out. There was just now. The butterflies in the stomach. The nose to nose pillow stare. The trying to tell and learn everything. The not sleeping. The, everything is new, my body sings like a fucking harp when you touch me, don't. ever. stop. feeling.

(When I was 16 and in love for the very first time, I used to sneak out of my dorm—I went to boarding school—alongside the swimmers who had morning practice to meet my boyfriend. We'd each stuff a blanket into our LL Bean backpacks and head out to where the junior variety sports team practiced; we all called it Vietnam. Truth.

Anyway, sometimes, I'm not kidding you, it'd be 30 degrees in the heart of winter and we'd crawl into our makeshift nest in a field and make love as it snowed. Seriously. This felt completely appropriate. I was crazed for him. I would cry when he left for the weekend. My loneliness felt palpable, choking in his absence.)

I won't bore you with my lineage of boyfriends although I will say I've been a monogamous creature my entire life and love people with that kind of aforementioned intensity. I only kissed two boys in college—both of whom I dated for three years. I have no interest in spending time with people I don't really, really like, romantically or otherwise. And the process of trying to find someone who I think is funny and smart and whose parts I want on my naked body?? It's rare. So when I find them I sink my teeth in.

I don't know, I've just always been that way.

I broke up with my latest boyfriend about six months ago. We moved here together from New York City; he was perhaps the most "serious" of all. We shared a car, a credit card, a home, a cat. And then suddenly there was that sinking feeling that neither one of us had that feeling. That clarity.

So even though we still loved each other very much—and everyone, ourselves included, was rather confused about why the hell we were separating—we wrenched ourselves apart, knowing it was definitely probably the right decision.

And while I knew it was definitely probably right—only once a week did I get flashes of nauseating panic—I of course, got depressed (which I'm prone to do), entered therapy, cried a lot, ate steaming pork chops straight out of the pan and alternatively felt alone and strong . . . and like ash. Like I could just blow away. I would be standing beside the stove chewing slowly, listening to Ween, and a memory would knock the wind from me—slow dancing beside our Christmas tree or the feeling of his body beside mine as I slept and I would think, fuck. When will that former life lose its hold on me.

Cut to one month ago. I'm one month into living with two wonderful girlfriends; they're bright, funny, kind. We've been feathering our nest and sharing secrets and sharing meals and boy-talk in underpants and it generally feels like high-end collegiate life and I fucking love it. I hadn't felt this balanced and calm in years.

Work was good, my friends were good; my ex-boyfriend and I by some miracle had remained the best of friends (that's another story) and I was just, like, happy. It may sound trite but it was one of the only times in my life I could remember knowing that things were good as they were happening. It wasn't in retrospect.

Then I met someone. And suddenly there were those tell-tale signs again. The incessant thoughts. The checking of the phone. The inability to sleep when he stayed over. Tripping over words in trying to explain my past, the things I cared about, how to convey 25 years of conscious life.

And yes I'll go ahead and quote Ani Difranco here: "Taken out of content I must seem so strange." Wanting to pry open the past and squeeze it through my fingers like a toddler faced with a bowl of spaghetti.

Feeling my body sing again. Thinking about sex. All the time. But amid all these feelings of yes, yes, yesssss!—literally and metaphysically—it was met with an equal force of no, no, nooooo.

And then it dawned on me.

Oh my god. I have baggage. Like I officially have baggage. And not the kind you're given as standard issue life baggage; my mother drank, my father is eccentric, I-had-lived-in-four-states-by-the-time-I was-in-6th-grade baggage. This was shit I had purchased, broken, bent, sullied and then strapped to my back apparently. And just now I could feel my legs buckling.

For the first time ever I was dreading what felt like the inevitable fall-out. I could already feel that cold stone in my stomach when you realize they aren't looking at you the same way. That the hunger is gone. I could already taste my own tongue after hours of crying, knowing that this one wasn't going "to work" either. I could feel that weight behind my eyes in the morning when you feel so sad and lonely all day you fantasize about getting right back into bed.

I had just gotten my head above water. Why oh why did he have to appear? Why oh why was I forged an all-or-nothing human? Couldn't I just like, have dinner and some casual sex like normal people? Did I have to want to rip everyone's face off and subsume myself?

It was with this fear and anxiety and confusion that I headed off to South America two weeks ago. I was meeting up with my best pal from boarding school. I arrived a day early and was let into my AirBnB by Carlos, a man, as it turned out, wired exactly like me.

He'd had just three relationships (he was now in his 50s I'd say) and each one was intense and bottomed him out. The man he was currently living with he met 11 years ago on the street; three weeks later they were living together. I threw my hands up and told him I had just started something new and felt really guarded and full of dread. I felt like I couldn't start all over again; I told him I envied how open his heart was. Mine currently felt like a stray dog, eyeing anything that came too close, accepting gentle touches begrudgingly if the biscuit looked tasty enough.

He listened, lifted his eyebrows and shrugged. "In Argentina," he said, "we say that in love, you've got to put all the meat on the grill." Otherwise, he insisted, there's no point.

I smiled and then laughed. And then sighed and then swallowed. He was right.

So I here I go again—wish me luck.