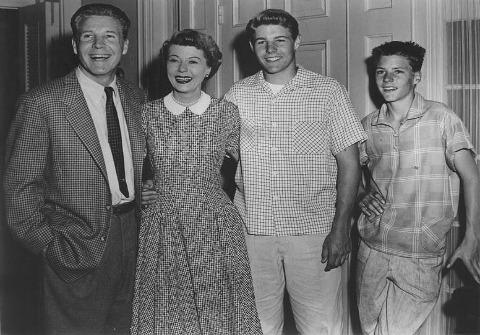 Textbook content is a contentious issue. Among the most fought over topics: history and government.  And while all textbooks are admittedly subjective, some try less than others to fetter themselves to reality. To that accord, here are the insights of two right-wing Christian textbooks for the homeschool market. (Because if we’re going to indoctrinate children with fringe ideas, we want to be sure to isolate them from hearing alternative interpretations in the public sphere.)

You see, despite what you may have heard about civil rights infringements, the treatment of women, and general tolerance of sexual abuse and bullying, Land I Love informs us the 1950s were actually a time when “the moral values of Biblical Christianity provided a just standard of law, order, and mutual respect, which in turn increased material prosperity.”

For another thing, there wasn’t pesky separation of church and state in schools: “School days often began with prayer and Bible reading . . . and civic organizations usually opened with prayer.” So what kind? Jewish prayer, Buddhist prayer . . . Oh I get it—Christian prayer! I guess any old Christian sect would do.

Well—not according to United States History. It informs us that starting in 1957 Billy Graham starting ruining everything by accepting “the sponsorship of liberal Protestants in a New York City crusade.” Blech! But don’t worry, “many fundamentalists broke with Graham over the issue. . . [T[hese militant fundamentalist Christians would not compromise their faith by joining with unbelieving liberals.” Slightly less conservative Christians can shove it—only the most militantly fundamentalist of Christians can rightfully claim the 1950s throne.

And that’s not all—the 1950s were also awesome because people cared about families—something we can only dream about now. Likewise, Land I Love tells us “Children played in local parks without fear” (do home-schooled children not go to parks?), and even “in the larger cities, crime was primarily restricted to the back alleys” (wink wink).

And by the way, you know the mid-century, government-funded Space Race? According to Land I Love, “Private research and tax revenue generated by healthy private businesses enabled President Eisenhower to bring the United States into the Space Age.” So it was pretty much the private sector. NASA SHMASA.  And 1950s Republican President Eisenhower. Kennedy Shmennedy.

But hey—the textbooks aren’t Pollyanaish about the 1950s. They acknowledge it had its faults: after all, even during this golden age church attendance was not universal. Think what America might have accomplished otherwise!

Hey, there are plenty of good things about Christianity, and we like the 1950s as much as the next person. After all, this was the decade that produced Elvis, mid-century modern design, and boundary-pushing Bette Davis movies. But let’s avoid touting one era of yesteryear as being the source of goodness and light, from which we have fallen. In plenty of ways, we’ll take the 21st century. (Image: commons.wikimedia.org)

If you like this article, please share it! Your clicks keep us alive!
Tags
1950s
textbooks
prayer
family
school
21st century