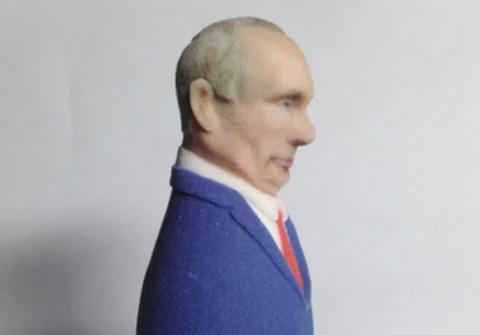 In the name of all that is Oscar Wilde, will you take a moment to admire the beloved (ha!) Vladimir Putin in butt plug form?

Deviously talented graphic designer Fernando Sosa blew up the internet today when he released this beautiful creation, courtesy of 3D printer technology. As with any talented artist, we demand to know the inspiration.

Sosa was super turned off by Putin's anti-gay policies and wanted to strike back. He says:

This is the second of my political oriented figurines. As many of you guys know, Russia is bringing an all-out war against the civil rights of gay people in Russia. Leading the charge is Mr. Putin and his homophobic leadership. I wanted to ridicule Mr. Putin so I wanted to make a voodo[o]-like doll of him so people could do whatever they wanted to Mr. Putin in the privacy of their own home. However, what a better way to attack Mr. Putin's shirtless bear wrestling reputation? Make him into the shape of a butt plug.

But before you jump on the Putin butt plug bandwagon and buy one (hey, they're just $23), know this: it's made of sandstone. But um, It's totally worth the pain to sully the smirk on that dictator right?! But(t), alas it's not so — sandstone rates a 7 out of 10 on (the sexily named) Moh's Scale of Hardness. That's about the same hardness as glass. Except, unlike glass, it's not smooth. Buy it, but don't use it.