The Baseball Game Proposal: Is It Worth It? 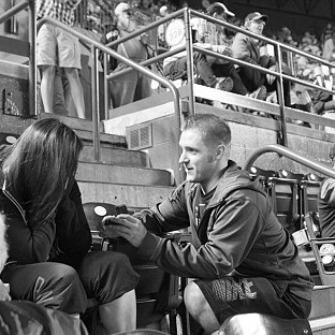 You're watching the game. Having a beer. Maybe nachos too. Meanwhile, a dude is popping the question on one knee right next to you. How romantic, right?

To some, maybe. Baseball games make great dates and many couples have found love at the bottom of the 9th. So, it makes sense that ballpark proposals are wildly popular. That is, popular enough to inspire hoaxes and spoofs. And while popping the question at a professional baseball game may look cool and spontaneous, they entail some very real planning—and investment.

You have to drop a decent amount of dough to ask your honey to spend the rest her (or his) natural born days with you via that giant video screen. Luckily, 100% of the proceeds go to charity. But there's a good chance that you may get priced out of your fave team. A's lovebirds are in luck—a proposal at O.co Staduim will only cost you $85. But If you're a diehard Dodgers girl, get comfy with the thought of a picnic proposal: a video board proposal at the Dodger's stadium costs $2,500.

Let's break down the real costs of proposing at the ballpark (note: ticket and beer prices are calculated for two):

You'll have to toast to your commitment and at the stadium, beer will likely be your bubbly of choice.

So, a proposal and simple toast is worth a small fortune.

Those number may be extreme, but it may take a serious investment to satisfy the lady. Apparently, one in five women claim to be "disappointed" by their proposals. Sure, you could buy a used car for the same amount of money, but can you put a price on the happiness of your future Mrs.?