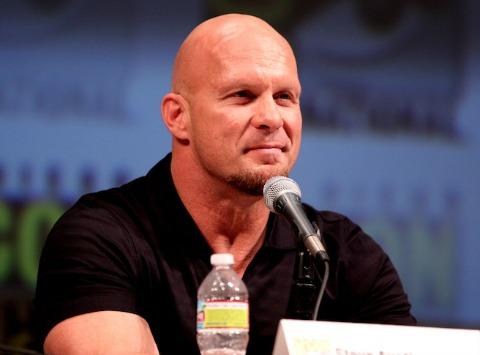 In the fight for social progress, it helps to have ultra-masculine former athletes on your side. Alas, many guys fear they aren't being "manly" when crusading for LGBTQ rights, so having a macho dude's dude express his support can do a lot of good.

That's why we're sending some fist pumps to WWE legend Stone Cold Steve Austin for his, shall we say, candid remarks about gay marriage. Austin (whose birth name, FYI, is the far more boring Steven James Anderson—yawn!), is most famous for his mega success as a WWE champion and Intercontinental champion who was inducted into the WWE Hall of Fame in 2009. Like many macho men before him, he's also dipped his toes into the world of acting and entertainment. Cooler yet, he even has his own podcast! So whether or not you dig the grunt-and-crush world of wrestling, you'd probably recognize his 6'2" ripped bod and badass bald head anywhere.

Though Austin recorded it months ago, one particular podcast has just now piqued the media's interest. In it, Austin declared his unwavering support for gay marriage...in his own, ferocious former-wrestler kind of way, that is.

Reportedly, Austin has several gay friends whose presence in his life encouraged the rant. In addition to his profanity-laced smackdown, Austin also attacked the institutions that prohibit LGBTQ equality. He demanded that churches get off their "high horse" and stop pretending they've spoken to a higher power about the subject, while ripping into inherent hypocrisy.

A guy can go murder 14 people, molest five kids, then go to fucking prison, and accept God and He's going to let him into heaven? After the fact that he did all that shit? See that's all horseshit to me, that don't jive with me.

Even though Austin himself is heterosexual (as well as a proud husband and father), his commentary is extremely beneficial. He took the idea that masculinity and homosexuality are mutually exclusive, lifted it over his head, and slammed it to the cold hard ground. Knockout.