Why Does Fiona Apple's "Criminal" Video Still Feel Shocking After All These Years? 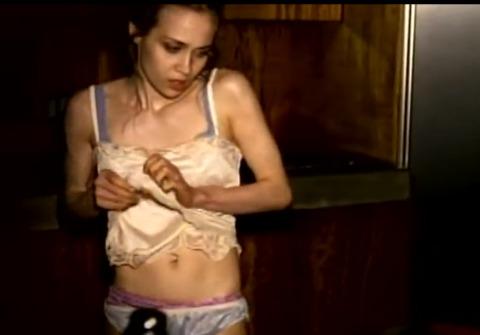 What weird shit will we get into by then?

Back in 1997, jazzy Fiona Apple got in hot water both in her "Criminal" video and with the press. She got like, tons of attention. There are even academia theses devoted to the sexuality presented in the music video. Today, it's still considered one the the most controversial music videos of all time.

Why all the fuss?

For starters, the entire music video seems to be following Fiona after some vaguely raunchy sex party (maybe they had the Viagra ice cream!). The opening lines sing, "I've been a bad, bad girl" and from the look of the setting, Fiona certainly doesn't look like she's having a movie night with her galpals. There are legs and clothes strewn amongst a stuffed animal with a highly phallic looking nose. Fiona is bedecked in a grungy glam ensemble: layer upon layer of lingerie. Fiona rakes her bony fingers (we'll get there in a moment) over her body in a presumed love anguish.

What has she done to her lover?

According to the lyrics, Fiona has been "careless with a delicate man," apparently, "just because she can." What did you do, Fiona? Our drama-mongering heads were thisclose to exploding with insatiable curiosity. Shadows permeate the space while the petite singer wanders the halls and stares seductively into the camera with giant, dark-lashed, maybe-abashed eyes.

Yup. That's another issue that's not-so-ambiguous. Lots of critics thought she looked more than a bit childlike. Most of this was due to the pattern of bones that decorated the skin of her teensy anorexic limbs. Fiona came clean not long after about her anorexia and attributed it to a traumatic rape incident she endured at age 12; critics still generally felt she was "slinking around miserably in her underwear and looking like an underfed Calvin Klein model." Sadly anorexia isn't a choice and sadder still Fiona contends it still affects her today. (She didn't have to traipse around wet in her skivvies however.)

So how does "Criminal" compare to our more modern—and shocking!—music vids? Yeah, "Criminal" oozes sexuality but even with Fiona's disturbingly lithe frame, rogue nipples and sudless bath-time, it's way more subtle than today's straight-up nudity bandieed about like so much popcorn. Like, Beyonce's "squirming" on her surfboard and Rihana will 'pour it up' all. over. you. in a denim g-string chock full of dollar bills.

The fact that "Criminal" still raises many an eyebrow says something strange—and powerful—about its influence on the ever-evolving confluence of female sexuality and pop music.