Will the Kentucky Senate Race Come Down to an Ill-Fated Cockfighting Endorsement? 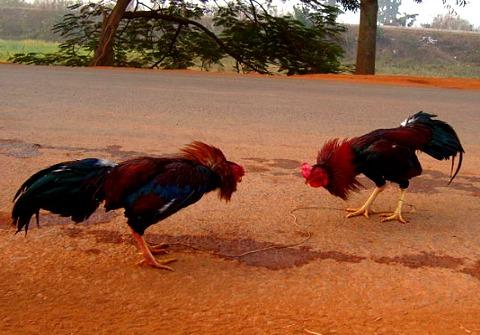 Whether out of actual wacky conviction, or simply the need to kiss up to target demographics, we’ve seen many a politician espouse the wonders of strange local traditions in a never-ending effort to win hearts, minds—and votes.

And so it is that Kentucky's current senate race—in which minority leader (and full-time turtle impersonator) Mitch McConnell is running for re-election on the Republican ticket against Tea Party darling Matt Bevin—has brought an old Bluegrass State vice into the spotlight: cockfighting. Yes, that most genteel (as well as illegal) of southern activities, in which roosters are made to fight each other while spectators hoot, holler and bet their month's paycheck.

The controversy began when Bevin spoke at a pro-cockfighting rally in southeastern Kentucky late last month, sparking outrage. The campaign then failed to keep its responses straight: While Bevin said he didn’t realize the nature of the rally (“I was the first person to speak and then I left” he claimed—sure buddy), his now-former spokeswoman spun the event as “a states’ right rally.” (Hey, can you prove the founding fathers’ didn’t have cockfighting in mind when they created the two-tier federalist system?)

Various news reports have since cast doubts on both excuses. Then, adding to the confusion, Bevin provided a sort of halfway mea culpa, saying he does not support cockfighting but “regardless of any personal views on this issue, animal rights are not an enumerated power granted to the federal government under the Constitution.” So, uh...did he or didn’t he know what the rally was for?

The McConnell campaign—which has no problem supporting corporations dictating women’s reproductive rights, but apparently draws the line at cockfighting—has gleefully jumped on the development, calling it “one of the most disqualifying moments in Kentucky political history.” As you might guess, the Bevin campaign is trailing McConnell’s by a wide margin with less than a month until the May primary, and is even starting to lose staffers.

But don't cry for Bevin. He could always try running for Congress—it’s way easier to win on nutty ideas when you only have to impress one district of crazies than it is to win a state-wide election in which more moderate voters come to the polls. And yes, alas, moderate voters tend not to support roosters ripping into each other while craven blood-thirsty spectators look on. Senatorial candidates, take note.