I'm a Feminist and I Want to Get Married. Please Don't Judge Me. 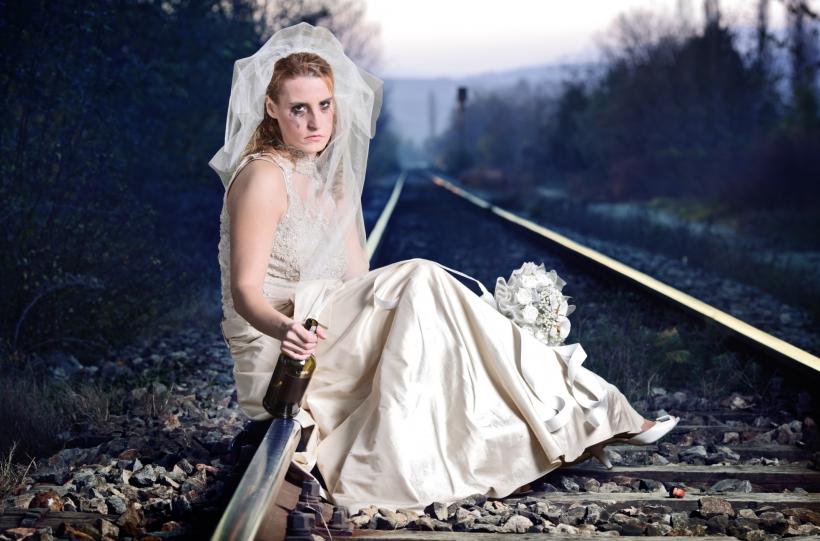 Over the last few years, I've often fantasized about this dreamy scenario: my family and friends are gathered outside on a sunlit day in Northern California—probably Mendocino, by the ocean—watching me as I walk down the aisle to the gentle croon of Peter Gabriel's "Book of Love." ("I love it when you sing to me..."). I'll be wearing a knee-length white dress with red pumps and red lips. When the ceremony is over, I'll walk off to the Magnetic Fields version of the same song. Then there'll be a big '80s dance party and an island-hopping Hawaiian honeymoon.

That's right. I'm a career-oriented, pants-wearing feminist, and I've planned out my wedding. Because guess what? I want to get married.

Yet every time I catch myself scrolling to "Book of Love" on my Spotify, or scheming an awesome bachelorette spot (Cat Club, San Francisco, Thursday night), or thinking "oh how lovely" when watching a wedding scene in a movie, I feel an acute pang of shame and regret.

And it's not just me: at dinner parties with my friends, we'll have no-holds-barred discussions about sex positions, politics, social issues and any number of other hot-button topics. But we rarely bring up marriage and, if we do, it's usually awkwardly danced around. ("Oh, I don't know if I want to get married." "I haven't really thought about it much." "We'll see...")

It seems something happened during the female march from rolling pins to corner offices, and I'm not entirely sure it's worth celebrating: marriage became the new dirty word for the modern woman.

There are any number of reasons we've reached this wedding-bashing juncture in feminism. In a recent New Republic story, Amanda Palleschi wrote about revulsion toward the overpriced wedding-industrial complex and all its Bridezilla connotations. And it doesn't help that many in our generation are children of divorce and, in ways both conscious and subconscious, we fear ending up like our fight-ravaged parents.

But the biggest issue is what we continue to associate marriage with: settling down into domesticated monotony, our once-fabulous lives bludgeoned into blandness by a white picket fence post.

Women who don't want to get married often argue all these points and more. One friend of mine, for instance, has also persuasively argued that marriage undercuts relationships by making commitment mandatory rather than an active choice. This kind of anti-marriage logic is completely sound, and I fully respect those who don't seek marriage—choice, after all, is what feminism is all about.

But I wonder if it's time to rethink some of the lingering stigmas that have turned marriage into an albatross even for those who actually still want it.

For one thing, it's ridiculous to assume any female who wants to get married is a monstrous Bridezilla in waiting. Moreover, the "marriage is the death of fun!" idea is archaic. As women, we've made such progress since the '50s—so why, instead of changing our conception of marriage to suit modern realities, have we saddled it with connotations from the past? In this era of relationship egalitarianism, who says we can't have adventure, career success and liberation. . . but with a ring on it?

Listen, I'm happy that marriage is not my ultimate ambition in life, and that I don't have a scrapbook of wedding gown ideas that I've been stashing under my bed since the age of seven. I don't want to get hitched to show off to the world that I'm good enough to be loved (maybe!) forever, and I'm not desparate or rushed to make it happen.

But I do want to spend the rest of my life with someone I love. I want that little piece of paper that says, whatever happens, we'll support and care for each other to the end. And damnit, I want that beautiful wedding by the beach, with my dad walking me down the aisle and my friends making toasts and the sun setting at the moment I look into my soon-to-be husband's eyes and say, with every traditional sentiment that comes with it, I do.

If you think this makes me old-fashioned and pathetic, so be it. But I'd like to think it makes me a truly modern woman.