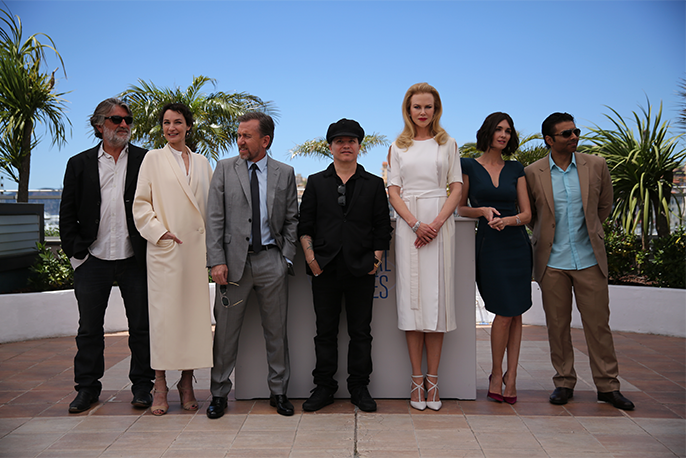 You know how it goes—in the beginning of the year, we pile onto our sofas with cocoa and cookies in hand and get ready to bask in "award season." Oooh, the nominees! Ahhh, the dresses! Well, truth be told, the dresses of late have been less of an "ah" and more of a "meh." For some time now, instead of donning the most gorgeous gown available to them, actresses have braved the award season with "safe choices"—the boring black. The "adventurous" metallic. The yet-again-pastel. All the while, couture shows like Dior's Cruise and Chanel's Resort are brimming with head-turning choices, out-there features and stunning details.

Why oh why do our leading ladies continue to overlook more adventurous choices?

We hate to admit it, but the whole, "Americans are more prudish than Europeans" theory could not only be true, but be rippling right into the fashion scene. The seemingly ever-growing gap between European and American mores is often connected to the fact that Americans (actors included) prefer "casual comfort" and favor a conservative approach to dressing up. They lack the rich pool of inspiration that living in a tight-knit European "global village" provides.

Look to the left, look to the right, everyone's wearing jeans. Or a chic—but simple—Calvin Klein gown.

On the other side of the pond, passion for cheekier fashion in Europe is contagious. Just take a look at the red carpet rolled out at the Cannes Festival, happening all week long in the world's most fashionable country, France. Nicole Kidman, always a Cannes princess—and this time for real—rocked a heavily beaded, sapphire blue number in a body-hugging lace, touting her new biopic Grace of Monaco. Blake Lively suddenly became a sultry siren, clad in sky-high slits and a flowing—yet geometric—burgundy gown. Hell, even Kendall Jenner looked like the model she's supposed to be in a very sophisticated Chanel. With feathers, of course.

We think American actresses forgo their safety zones and traipse over go to Cannes armed with dramatic couture for two reasons: 1. They've got all those pesky Europeans to compete against (hello, local girl Laetitia Casta!) and 2. Their stylists know there will be far less judgment—Cannes is usually off the Fashion Police radar, thank God—so everybody can kick up their wow factor. That, ladies and gentlemen, is how we get our usually all-too-reasonable stars into negligees and boas in public.

Now, without further ado, here are five of the craziest, most wonderfully un-boring looks from Cannes over the years. (In other words? American actresses: print this out, tape it to your fridge, thank us profusely.)

2. Kirsten Dunst in Chanel, 2010: Sometimes, all it takes is a splash of color—preferably a splash of WHAT color. Insane make-up helps too.

3. Laetitia Casta in Dior Couture, 2013: Yup, those feathers again. Plus, a see-through skirt and that retro hair.

4. Rachel McAdams in Marchesa, 2011: The red lacy number will forever be remembered as the dress that took McAdams to the sexy zone.

5. Cate Blanchett in McQueen, 2010: Only Blanchett could pull this off—the eagle, the Christmas-y print, the tulle. And yet, the whole thing is surprisingly regal and offbeat.