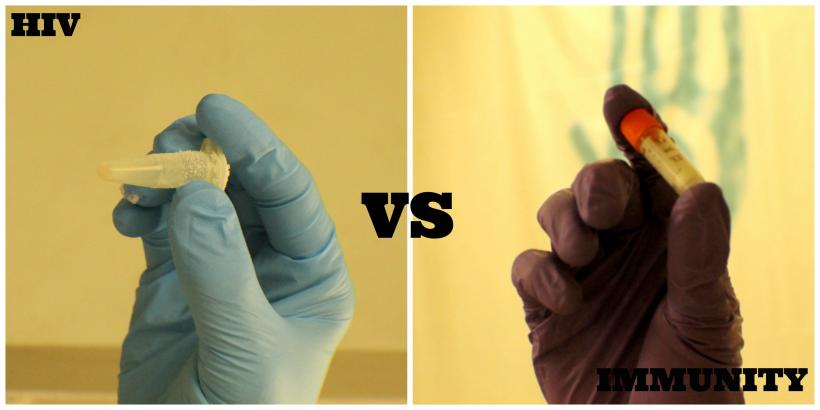 Here's a startling fact: Out of the 75 million people who have contracted HIV since the beginning of the epidemic in the early 80's, almost 36 million of them have died from HIV-related causes. Currently, about 35 million people are living with HIV/AIDS, and even with all of the available information, approximately 262 additional people contract the virus every hour through an exchange in bodily fluids including blood, semen, pre-seminal fluid, rectal fluids, vaginal fluids and breast milk.

Scientists have been searching for an elusive AIDS cure for decades. Now one company, Immunity, may be on the cusp of one of the most significant breakthroughs to date, thanks to a vaccine designed to stop the HIV virus in its tracks.

The Immunity project was created as a nonprofit initiative of Flow Pharma, a for-profit drug delivery company, and is fiscally supported by Until There's A Cure, the leading non-profit Bay Area Initiative for HIV/AIDS research. According to Howie Diamond, Immunity's Director of Marketing and Strategy, "No one really knew what HIV was at the time, but [Until There's a Cure] wanted to work with companies that were thinking outside the box." And "outside the box" is exactly what Immunity is doing.

A few years ago, Dr. Bruce Walker, who runs the Ragon Institute at MIT, discovered that there are people who have a natural immunity to HIV.

They were born with an immune system that contains this biological super power where they can see the virus in a way that most people can't. They can see where the vulnerable spots are in the virus as it's mutating and deploy their killer T-cells [to] target it in a way that suppresses and stabilizes the virus so that it never metastasizes into AIDS. - Howie Diamond on HIV Controllers

Walker called these people “HIV Controllers," and the scientists at Immunity found a way to use this natural power to create the vaccine. Ravishly got a behind-the-scenes tour led by Howie Diamond for a first-hand glimpse into this potentially revolutionary cure.

How Immunity is Changing Vaccination

First, a little background: The HIV virus attacks T-cells—which control our immune response—to break down those immune systems. It also works its way into DNA so our bodies will replicate the virus. HIV mutates close to 1,000 times faster than the human genome in a week. Its sole purpose is to destroy our ability to fight off opportunistic infections.

In the late stages of HIV—AIDS—bodies become devoid of T-cells and riddled with the virus; there is no way to fight off the opportunistic infections, and those inflicted can die from something as simple as the common cold.

Vaccines are made in a lot of different ways, but they all have one thing in common: They use the same material that the virus is made from.

Here's how the seven-person Immunity team changed this model:

Instead of targeting our antibodies, the Immunity vaccine targets the T-Cells. Why? If the T-Cells are predisposed to identifying markers in the HIV virus, they can send antibodies to kill the virus before it spreads.

Immunity scientists synthesized the epitopes (the tiniest little cell markers) that allow the immune system of HIV controllers (those naturally resistant to the virus) to "see" and kill the HIV virus. The researchers then encapsulated them into biodegradable microspheres so they're large enough for threatened T-cells to recognize the virus and attack it.

The microspheres are then made into a solution that can be administered to HIV/AIDS patients, as well as people that are currently uninfected, so the virus never has the opportunity to wreak havoc. In other words, it's a true vaccine.

How is Immunity Going to Deliver the Vaccine?

With (yes) a nasal spray. Through Flow Pharma, Immunity owns the patents for a nasal dosage; the goal is for consumers to self-administer the vaccine safely and effectively utilizing the same technology used for allergy and asthma relief. An inhalable vaccine has never been implemented before however, so it will need a lot of clinical testing. But it could be another way Immunity is poised to change the vaccine game.

But Does it Work?

The Immunity team thinks so. They just got published for the first time in a peer-reviewed journal, Vaccine, for the positive results in their mice testing experiments. It's the first step to getting their experimental data off the ground, as credibility is key to procuring funding for human trials.

We're taking something that already works, we know it works, it's a biological phenomenon. If we can figure out how to give everyone else that power, then we're not reinventing anything. — H.D.

So far the vaccine has worked on trials with mice and on in-vitro blood samples (test tube blood). The team is working hard to make sure that human cells will produce an immune response to the HIV virus—and according to the tests, they are seeing success.

The scientists' newfangled machine is called the Flow Cytometer, and it uses lasers to activate different parts of cells so that it can read the individual cells in a test tube and show the scientists whether or not those cells see the HIV epitopes. This data shows that, thanks to Immunity's vaccine, the live cells can see the HIV markers and are producing an immune response.

What I'm showing here is that when cells come into contact with our vaccine, they upregulate, they activate. So they're seeing the vaccine and they're like, 'hey! Something's here!' I want to know that they're seeing my vaccine peptide and actually making an immune response to HIV. — Craig Rouskey, principal scientist at Immunity

A Bit of Backlash

Not everyone is convinced that the plan will work, however. In February, the Daily Kos published an article that was highly skeptical of Immunity's project. The writer happened upon Immunity's crowd-funding venture through this critical article and called the team and the project "a sad attempt to scam unwitting altruistic people willing to donate their own money in pursuit of developing an HIV vaccine."

He did his research on the scientists involved in the actual creation of the vaccine and claimed that, while all of them are highly regarded in the scientific field, none of them have directly worked on research for HIV and AIDS.

Yet the writer concedes that Dr. Charles Herst, chief science officer at Immunity, founded "his own clinical lab in Brussels which . . . performed assays to detect changes in the blood during chronic immune/infectious diseases." The team also has numerous advisors (as listed on the website and in this White Paper), and is working directly with Until There's a Cure, a leader in HIV/AIDS research.

The Kos article also notes that "much of the HIV vaccine field is currently exploring approaches to induce protective antibody production. What it omits is the long string of failed HIV vaccine strategies designed to induce a T-cell mediated immune response."

While this is fair, it's important to note that every attempt to create any type of HIV vaccine ever has failed. The Immunity project is using new technology that has never seen the inside of the vaccine lab before; the team has been backed by Y-Combinator and Microsoft for their innovations in the scientific field.

As an overview, here are a few key things to know about this project:

1. Immunity Project is testing on multiple types of immune systems. They want to make sure that this vaccine will be able to kill the virus in everyone, not just the people with the most common immune coding.

2. The team is ready for human testing, and they aren't waiting for funding—they're seeking it out. They raised half a million dollars through crowd-funding in less than three weeks, and now they're working to find large donors to hit their next goal of $5 million.

At the end of the day, the only thing standing in the way of getting to the end of Phase 1 and Phase 2 and seeing if it actually works in human beings, is fund-raising. That's the only thing stopping us . . . A lot of these operations are so big there's a lot of bureaucracy and red tape, and they operate very slowly. We want to move faster." —Howie Diamond

3. Because the vaccine uses no part of the live virus and doesn’t use decoy viruses to target the immune system, this method has the potential to be the safest vaccine platform known to us today. This technology could change the way scientists create vaccines in the future.

4. Because the vaccine will be inhalable and easily self-administered, it will require less infrastructure to distribute than a typical vaccine. There is a possibility that the product could be air-dropped to places that are difficult to get trained staff to. This makes distribution cheaper and more effective.

5. The Immunity project is using a computed algorithm and reverse engineering to create the epitopes for the vaccine in-house. "Machine learning within the context of biomedical and pharmaceutical uses is so new," says Diamond, that no one has ever tried to apply it to a vaccine before.

6. Immunity's goal is to give away the vaccine for free.