Flying First Class with Ebola: How the U.S. is Avoiding an Infectious Outbreak of Biblical Proportions 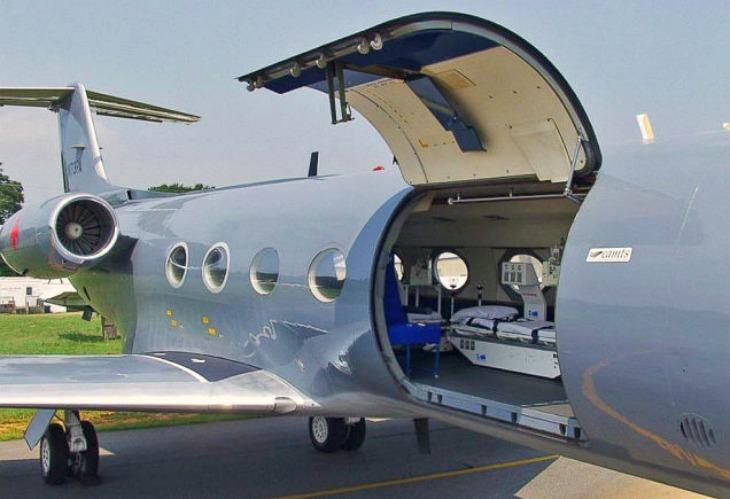 You’ve probably heard about the two American missionaries with Ebola being flown separately back to the U.S. for treatment. And you’ve probably also wondered how this process goes down without exposing other Americans to this so far Africa-contained virus from hell.

The patients’ end destination is Emory University Hospital in Atlanta, which “has a specially built isolation unit to treat patients exposed to certain serious infectious diseases,” according to the Atlanta Journal-Constitution. With the aid of the Centers for Disease Control and Prevention, the unit has been physically separated from other patient areas.

What About the Flight?

We can only assume there are loads of procedures in place to prevent transmission from the patients to medical staff at that facility, but what about during transportation from Liberia to Atlanta? Or as journalist Tyler Rogoway puts it, “How do you pack two patients that are infected with one of the world's deadliest viruses into a pressurized aluminum tube that is filled with healthy care takers and pilots for 12 hours and not get almost everyone infected in the process?”

By using a tricked out military jet—which looks straight out of a Hollywood blockbuster about an epidemic—highly modified to convey drastically ill people over long distances.

The appointed plane for the task is an ex-Royal Danish Air Force aircraft, Gulfstream III, two of which were sold to a U.S. military contractor in 2005.

The Gulfstreams serve a particular function beyond the capacity of many other air ambulances: They travel intercontinental distances at high speed, with a good-sized medical team onboard.

Let’s examine the features of the little airplane that could (prevent us from contracting Ebola): "Gray Bird 333.”

* The jet’s inconspicuous appearance as a business jet, together with the civilian plane number painted on its exterior allows it to operate in sensitive areas while keeping a low profile.

* The extra large cargo doors and convertible interiors allow room for equipment and stretchers too large for many other planes.

* Correspondingly, the jet has extensive medical equipment to treat the patient's symptoms during the flight.

* And especially important in this case, the plane will be outfitted with a special tent-like plastic structure and specific air pressure to keep any pathogens from the passenger area from entering the cabin and potentially infecting the pilots.

Even with these safe guards, I imagine these missions involve some level of risk for those involved. So we wish the brave volunteers luck to stay healthy, and double luck to not spread the disease to citizens of the U.S.