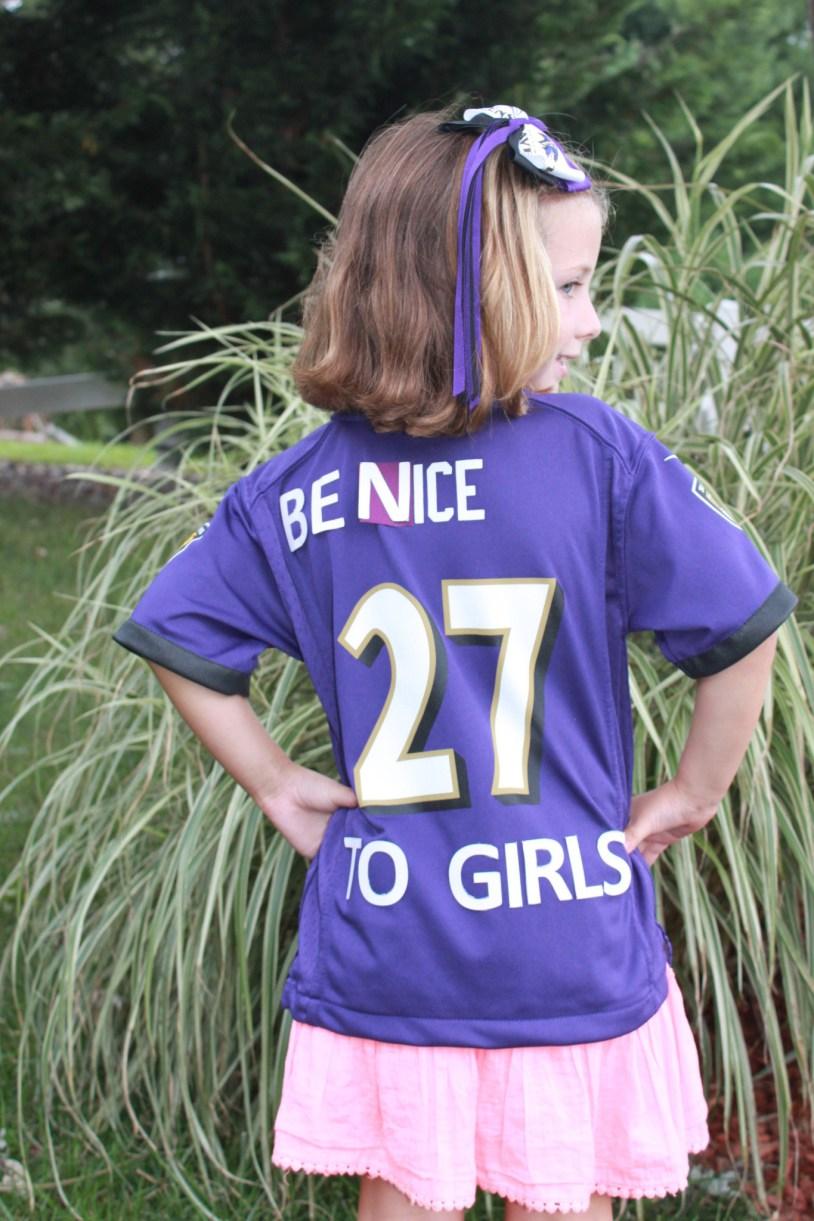 In the wake of the heinous Ray Rice video leak and broader conversations about domestic violence and the NFL, a lot of football fan parents have been struggling to know how to handle the situation—with specific regards to some Ray Rice jerseys their kids might own. Baltimore-area Bryan Bartlett, father of two, was one of these parents. And in a “solution” that has gone viral on social media, even capturing the attention of the likes of Time and The Today Show, he glued letters to his six year-old daughter’s jersey so that it now reads: “Be Nice To Girls.” Hailed as a “powerful message” and “positive”—it makes me want to barf.

Why would this little doctoring effort, an apparently “pro-girl” move, make me queasy? A few reasons. The first is that I take issue with the words “be nice” being in any kind of proximity to girls or women—especially when a man has strung them together. It’s my knee-jerk reaction to the absolute deluge of similar messages we get inundated with from birth on. It's the kind of message that teaches women to be nice and manage their relationships at all costs—like, say, even if they are to be treated poorly by their romantic partners . . .

Beyond this knee-jerk reaction to the visual of a girl wearing a shirt that says “be nice” (and yes, I know the message isn’t for her, but still, it's on her person), why is it just Bartlett's daughter who gets this special jersey? What about his nine year-old son? It all feels too commonplace; girls and women bearing the burden of holding men responsible for how they should treat them. Not into it.

And Bartlett’s quote on his “solution” is quite instructive:

“I was just hopefully teaching my daughter that we expect that guys always are nice to you and treat you with respect and that you don’t put up with anybody being mean or hitting you or anything like that ever. It’s just never acceptable.”

Let me be clear: I agree that domestic violence is never acceptable. Wholeheartedly. And I do think messages about girls and women being inherently valuable, worthy of respect, and lovable just as they are should be reinforced all day every day. But . . . this feels a bit victim-blame-y, no? The onus, yet again, is on the daughter to make sure she know this abusive behavior is never acceptable. And there's just too much of this nonsense out there.

Can we empower our female brethren without burdening them with the expectations that they are the ones who have to make clear that they deserve such empowerment? It’s a fine line, I realize, but let’s move toward it.

“We were just trying to decide what to do with our kids’ Ray Rice jerseys as we really didn’t feel we wanted them to wear them anymore. Everyone we saw online was cutting them up or things like that. We tried to come up with something a bit more positive and fun.”

Bryan, dude, I know you’re trying to do the right thing. You have just heart-of-gold intentions and I realize I’m not a parent but . . . “a bit more positive and fun”? What happened to domestic violence never being acceptable? Let’s send this empowering message to our children: Fuck abusers. Let’s ditch their jerseys, let’s be hypercritical of the NFL and its responses to its players’ egregious transgressions against its “personal conduct policy,” and maybe let’s not conflate domestic violence with issues of being “nice.”

Domestic violence has nothing to do with being “nice.” It’s a complex breed of violence, with structural roots that need to be critically examined. Not to mention, it doesn't just affect girls. So I’m not trying to tell you how to live your life, Bryan Bartlett et al—but there are other, better ways to send the anti-violence message.

Like, for instance, this badass pizzeria in Baltimore, Hersh's Pizza and Drinks, giving away pizza in exchange for Rice jerseys:

So maybe . . . have some fun and be a "bit more positive" by taking some awesome pizza to the face instead?