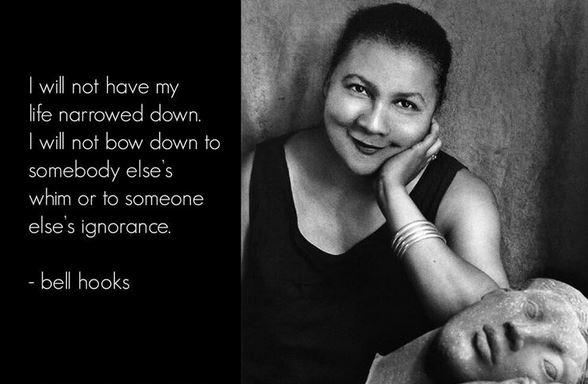 Good people of the Internet! Gather ‘round for a very important announcement: Today is bell hooks’ birthday! Yes, bell hooks has been blessing the world for 62 years now. Here’s to 62 more . . . or you know, a million (I realize this is a bit much to hope for, because science. But we’re making strides on that whole resurrecting the dead front so I’m going to keep my fingers crossed).

Why such excitement over bell hooks? Goodness, I’m not even sure where to start. A prolific writer, poet, academic, and activist devoted to exploring the intersections of gender, race and class, bell hooks really has just been killing it on all fronts her whole life. One could argue, killing it is literally all she knows how to do.

But let’s start at the beginning. Born Gloria Jean Watkins in 1952, she grew up in Hopkinsville, Kentucky, the child of a custodian and one of seven children. She went on to Stanford University, graduating in 1973, later snapping up a masters from University of Wisconsin-Madison and her PhD from the University of California-Santa Cruz, the whole time writing and shaking shit up.

In 1978, she published a chapbook entitled And There We Wept, assuming the nom de plume “bell hooks” after her maternal grandmother. She chose not to capitalize it so as to emphasize the substance of her writing over her identity.

And damn has she been writing since; she's published over two dozen books and countless articles. Many of them, like her landmark book Ain't I A Woman: Black Women and Feminism have been revolutionary, and revolutionarily important, in their explorations of how race and gender interconnect.

She also saw a giant gap in feminist literature. After countless conversations with people who told her she was "not like 'real' feminists who hate men, who are angry," she kept wishing she had a nice little reference book so people could better understand the movement. She wanted to hold in her hand a "concise, fairly easy to read and understand book." Lacking such a resource, she wrote it. In Feminism Is For Everybody, she expands upon her simple definition of feminism: "A movement to end sexism, sexist exploitation, and oppression."

Not that she just writes books. If you remain convinced that she's some stodgy academic, I’ll politely refer you to this incredible interview she did with Lil Kim in which they broach of stunning breadth of topics—from spirituality to beauty to the prevalence of butt sex—all with the most utmost realness.

bell hooks was even the inspiration for a "feminist phone intervention." A few months ago, a Tumblr by that name cropped up with a number to call "the next time someone demands your digits and you want to get out of the situation." When the person calls or texts, an automatically-generated quotation from bell hooks responds. As the Tumblr says, "Why give any old fake number, when you can have bell hooks screen your calls?" Why is such an intervention necessary?

And I would add, because it's awesome to have bell hooks' quotes available via text. Either way, if you're ever in a pinch, just pass along (or dial) these little digits: (669) 221-6251. Abroad? The Tumblr has since gone international.

I could go on and on, but why ramble when I'll never be able to type anything as inspirational or badass as bell hooks could? In conclusion, here are some quotes from the birthday girl herself. Feel free to read them, her books, her interviews, and everything else she's ever been involved with. It's her birthday, but that doesn't mean you can't enjoy it, too.

“If any female feels she need anything beyond herself to legitimate and validate her existence, she is already giving away her power to be self-defining, her agency.” - Feminism Is for Everybody: Passionate Politics

“The process begins with the individual woman’s acceptance that American women, without exception, are socialized to be racist, classist and sexist, in varying degrees, and that labeling ourselves feminists does not change the fact that we must consciously work to rid ourselves of the legacy of negative socialization.” - Ain’t I a Woman: Black Women and Feminism

“We fear that evaluating our needs and then carefully choosing partners will reveal that there is no one for us to love. Most of us prefer to have a partner who is lacking than no partner at all. What becomes apparent is that we may be more interested in finding a partner than in knowing love.” - All About Love: New Visions

“There will be no mass-based feminist movement as long as feminist ideas are understood only by a well-educated few.” - Feminist Theory: From Margin to Center

"People with healthy self-esteem do not need to create pretend identities." - Rock My Soul: Black People and Self-Esteem

If you like this article, please share it! Your clicks keep us alive!
Tags
bell hooks
feminism is for everybody
ain't i woman
race
gender
university
Birthday
lil kim
feminist phone intervention