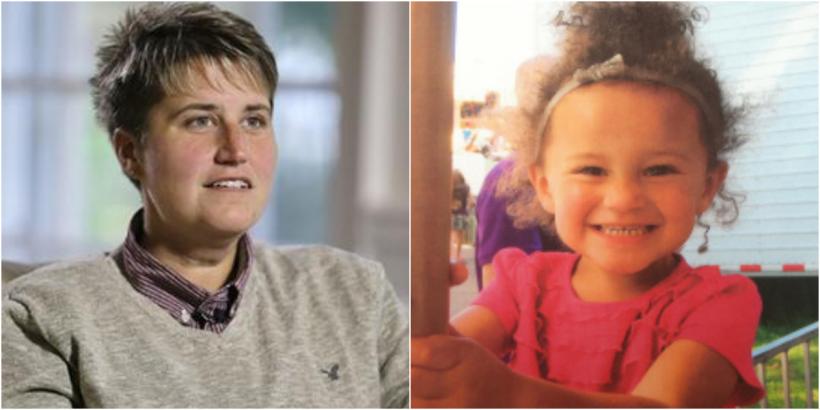 So in case you’ve somehow missed this totally viral story, an Ohio mother, Jennifer Cramblett, is suing a sperm bank for having given her the wrong sperm. She and her partner, both of whom are white, discovered five months into her pregnancy (when they ordered more vials for future pregnancies) that the Midwest Sperm Bank had mistakenly given her sperm from a black donor, instead of the white donor they had selected.

Months later in August of 2012, Cramblett gave birth to a beautiful baby girl, Payton, with whom she bonded “easily.” Cramblett and her partner Amanda love the now-toddler very much, but are suing the sperm bank for “wrongful birth and breach of warranty, citing the emotional and economic losses she has suffered.” Pointing to challenges related to raising Payton in their small, almost 100% white town of Uniontown, Ohio, they are seeking the funds primarily to be able to afford to move to a new, more diverse city where they believe Payton will be better able to flourish.

And the media are having a field day. Cries of racism are ubiquitous, as are belittling stories about Cramblett. While NYMag nails its headline "Moms Sue Illinois Sperm Bank for Giving Them Wrong Donor"; others, not so much.

These trite headlines, though not inaccurate, are unfair—and miss the point. First, there’s no question that Cramblett and her partner love the shit out of their child. In a recently recorded interview, Cramblett breaks down on screen, trying to imagine life without her cherished daughter. So the biggest potential problem in this egregious sperm bank mix-up is a non-issue: Baby Payton’s parents love her very much; their legal action does not spring out of blind racism and rage at birthing a biracial child.

Second, this level of a mix-up at a sperm bank? It’s unconscionable. Imagine if Cramblett had been given a donation that hadn't been properly screened for a genetic disease. Or one that had HIV. I think the outcry would have been a little more measured and favorable toward her. Not to mention, Cramblett and her partner Amanda selected a donor, not out of white supremacy leanings, but because they wanted a child that resembled Amanda—given that Cramblett was carrying the child, they wanted the baby to look like a mix of both of them and who can fault them for that?

And on the lawsuit itself, the reasons for the couple wanting to move to a more inclusive area are real. The lawsuit states that Cramblett has family members who make openly derisive comments about people of color. Further, Cramblett has been open about her lack of cultural knowledge, the lawsuit stating that she didn't “know African-Americans until her college days at the University of Akron.”

And, the lawsuit goes on:

“Because of this background and upbringing, Jennifer acknowledges her limited cultural competency relative to African-Americans, and steep learning curve, particularly in small, homogenous Uniontown, which she regards as too racially intolerant.”

I, too, hail from a town that is essentially all white. It, too, is pretty racially intolerant—at best completely racially ignorant. And I cannot fathom trying to raise a child of color there. Call Cramblett and her partner racist, but I think it’s irresponsible—and potentially incredibly harmful—for a non-white child to be brought up by parents who are not “culturally competent” in an all-white town. I’m, of course, not saying it can’t (or shouldn't!) be done, but I am saying it would be damn hard and requires huge dedication.

But the bigger issue I have with the ire surrounding this story is this: If so many are so up in arms about this mother suing over a sperm donor mix-up, why aren’t they contemplating what Cramblett is saying when she speaks about her part of Ohio being racially intolerant?

Why are we looking at all the reasons she doesn’t want to raise her daughter in Uniontown (having no one around that looks like her daughter, the challenges of getting her hair done, the blatantly racist comments of family members) and connecting the dots to what life is like for black parents? Cramblett is a straw man. The real issue here isn’t her “racism” but our country’s. And if we’re going to do anything about it, we need to stop contemptuously throwing individuals under the bus, as if disparaging them is some kind of solution.

Just like the intolerably inane comments about our racial issues being over because we have a black president (when in fact his life has been threatened three times more often than any other president in history), calling Cramblett a racist and then calling it a day does nothing to actually combat the destructive, rampant and far-too-often deadly racism of our society; instead it gives it a pass. So maybe instead of attacking this mother who loves her biracial child very much for her rightful lawsuit over a huge sperm bank screw-up, we should cogitate a bit on the real issues of racism that plague our country by listening to those it affects most.

Raising a child of color in this country is fucking hard; let's maybe capitalize on this (and every) opportunity to focus on that, and take our cues from the parents who try and do it every day.