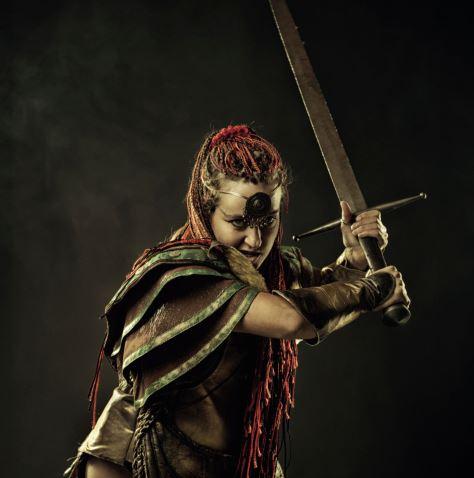 The lights are going out. Tiny galaxies of curious melodies are shrinking into silence. They are closing the Pinball Museum for the night.

We are grateful for the dark. It's been a long two hours—for me, pacing in front of a PowerPoint on sexism and racism in pinball art, and for H, crouched behind a camera, eyeing mic levels and making sure I don't walk out of frame.

I pull the mic out from under my dress. My clothes are so damp. I wish I could turn off—just flip myself into an idle state of void. When I close my eyes I just see my audience, their faces a flowing cascade of quizzical, righteous fury and dubious disbelief. Go home. I'm done talking.

"I just don't know how to do it yet, you know, without getting their attention."

Over the weekend, game developer Brianna Wu and her husband went into hiding amidst a deluge of graphic death threats—the latest victim of the online hate group GamerGate's campaign against women and marginalized voices in games.

You might remember those guys from my article on Zoe Quinn's harassment.

My lecture was attended by 15 people. Flyers for it were not posted anywhere outside the actual museum. I didn't name names—I omitted any references to actual "real life" sexism or racism at actual pinball events, and much of the material and research I used was contributed anonymously. There were no accusers and no accused.

And still my cameraman (and I) are afraid to post the video. We are afraid for our safety, our mental health, the safety and security of the pinball museum.

Because this sweltering hive of hurt has tried to take people down for less.

For having sex. For saying a video game is sexist. For being roommates with someone who is in the same industry as you.

GamerGate has an ever-escalating campaign of "zero tolerance" toward anyone they deem a "social justice warrior." You can have your personal information released onto the Internet and be forced from your home into hiding over the smallest "infraction."

The term "social justice warrior" is an epithet given to those who employ the Internet to confront systemic oppression. Once a cutesy meme about overeducated bleeding hearts out of their depth, it has now become a brand to classify intended and acceptable targets.

Shortly after the formation of GamerGate, this chart—denoting "SJW journalists" within the games industry—was disseminated amongst the Internet.

(A wild disclosure appears: I briefly dated someone on this list, and you'd be really jealous to learn who.)

The intent here is obvious. Several of the women on this list have endured targeted, deliberate harassment intended to silence and intimidate. Some of the men, too.

"Social Justice Warrior" is, as terminology, effective and easy to weaponize. To be a proponent of "social justice" is to have an agenda that, in spaces where education on power structures is scarce, seems clandestine and esoteric. We are mystics, speaking in indecipherable tongues, wildly working to topple the neutral, the fair.

The addendum of "warrior" casts us as the aggressors, as challengers—we are not mediators or advocates, but invaders. And we're coming for your video games.

But when it comes to GamerGate, there are no rules.

This Is Not War

War has rules. It seems absurd and arbitrary, until you consider that the people who participate in the proliferation of war—politicians, profiteers, other p words—don't expect to actually ever encounter the symptoms of war.

The rules of war allow for minimal loss of commodity (i.e. the soldiers and weapons employed) and to maintain a veneer of a playing field, a place where the fighting will occur. These rules are violated, all the time, but it gives us a moral safety net to fall back on. Once you defeat your enemy, you can put them on trial for not fighting fair.

But there is no "social justice war." There is no battlefield, and no rules—for the aggressor.

GamerGate will find your phone number, your address. They'll release your private photos and blow up your Twitter mentions with death threats and "think aloud" about raping you. They do this without consequence or reproach within the game community—all while their victims are asked to be open to "civil discourse."

There is a group of men making a full-length documentary to discredit Anita Sarkeesian—for which they're making $8,000 a month. No one has followed them to their homes. No one has threatened to rape them on Twitter. They do not need a security detail when they speak at a conference.

There is no expectation of equal reaction. This is not war.

Zoe Quinn has had her own nude photos sent to her by GamerGate harassers and repeatedly told to kill herself.

Someone somewhere maybe lost their job because they listed "gaming" as a hobby. So the beatings continued. Morale did not improve.

This is not war.

Brianna Wu reached out to Adam Baldwin—yes, the actor in that crappy sci-fi series is one of the figureheads of GamerGate—and offered to bury the hatchet over a cup of coffee.

He agreed—if she formally apologized to GamerGate for accurately estimating it was they who orchestrated or at the very least created a demand for the death threats that made her flee her home.

This is not war.

This is occupation. This is the quelling of dissent, without any expectation of consequence or reprimand for the aggressors, who are tactically only limited by their imagination and, well, if they could make good things with that imagination, we wouldn't have to suffer through over 20 Call of Duty games.

Apt that a culture that so glorifies war does not actually understand what war looks like.

We are not social justice warriors. We are resisters—and on the run.

GamerGate is a microcosm of patriarchy and rape culture. This is why the major gaming sites are looking the other way—to challenge GamerGate is to challenge patriarchy. Once we are all silenced and in hiding (or actually murdered/raped), then gaming, and society as a whole, can shrug back into a status quo. If a resistance transpires and visibility is afforded it, if we can make enough noise to overturn GamerGate, then "the agenda" poses a challenge to society as a whole.

As it should. Shit, I'm tired of having to dodge handsy men at the laundromat.

I understand your non-participation. But this isn't war. This is occupation. Extermination. Your silence puts you on the side of the people threatening to rape and murder women.

And when revolt befalls, those women will remember.