Reeva's Family Is Happy With Oscar Pistorius' Ruling, But Should Society Be? 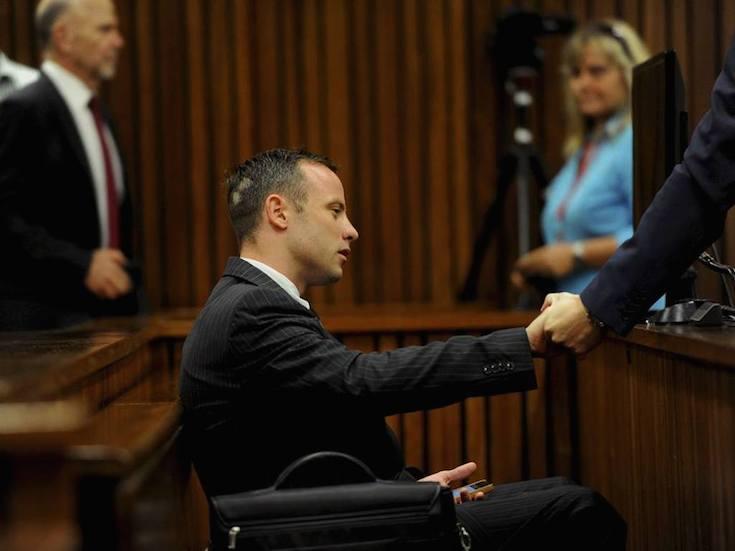 The Oscar Pistorius case was messy right out the gate. When the beloved paralympian was arrested for shooting his model-cum-women's-right's activist girlfriend, Reeva Steenkamp, he used his handicap to explain the fear he felt when "mistaking" Reeva for an intruder. Pistorius also engaged in gratuitous sob sessions when in court and statements insisting her was "devastated." Yet despite his seemingly palpable sorrow, evidence that he is temperamental, abusive, manipulative and trigger-happy continued to pile via testimonies and texts.

And despite said evidence, Pistorius' sentence has been finalized: after being cleared of murder, he now faces five years in jail under culpable homicide charges as well as a three-year suspended sentence. According to BBC, it's believed that Pistorius will serve a mere ten months in prison and spend the rest of the sentence under house arrest.

Maybe it's just me, a random, angry American woman, but I want Pistorius to suffer. To endure terrible things. To enter jail and feel that same fear he evoked from Reeva and another ex girlfriend. However, Reeva's family stated that they were happy with the outcome of the trial, that it brought them closure. No form of justice can "magic her back," her mother stated; she claimed that she was happy to see Pistorius serve any sentence whatsoever.

Whether or not we believe justice was truly served, can we take solace with the knowledge that the sentencing was sufficient for the Steenkamp family? I'd like to say yes, but as South Africa has the highest rate of violence against women in the world, I can't help but wonder if this case is setting a dangerous precedent for the ramifications of "culpable homicide?"

Like the infamous O.J. Simpon trial, the case is already causing outrage; on Twitter, the hashtag #ThingsLongerThanOscarsSentence is already trending. It's a sad day indeed when the Twittersphere commands our respect more than the justice system.