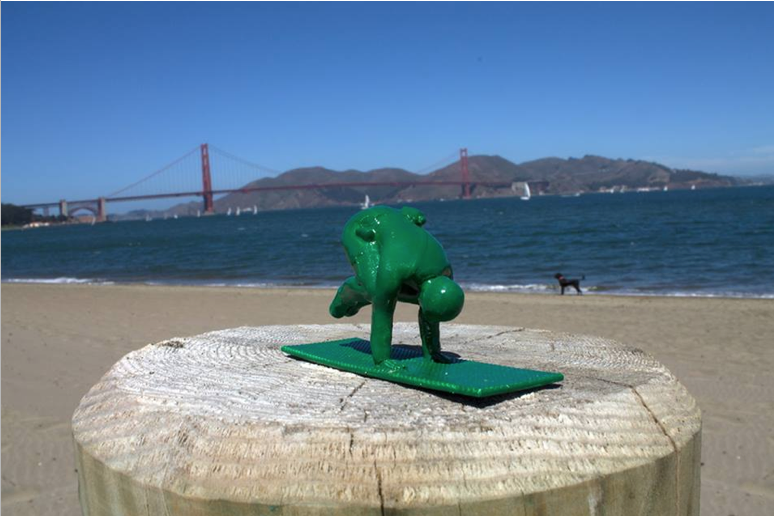 "Hey Giana," began Dan Abramson—the creator of Brogamats/my neighbor—last week. "Did you think I was crazy when we met last year?" Dan's girlfriend laughed as I struggled to answer. I didn't think he was straight-up cray . . . but I did notice that Dan spent a lot of time tinkering with green army men in the basement while his roommates and I relished gratuitous shots of Fireball. Whenever I stumbled gracefully meandered near Dan's lair, he'd explain the project: manufacturing green army men (like the ones from Toy Story) in yoga pose 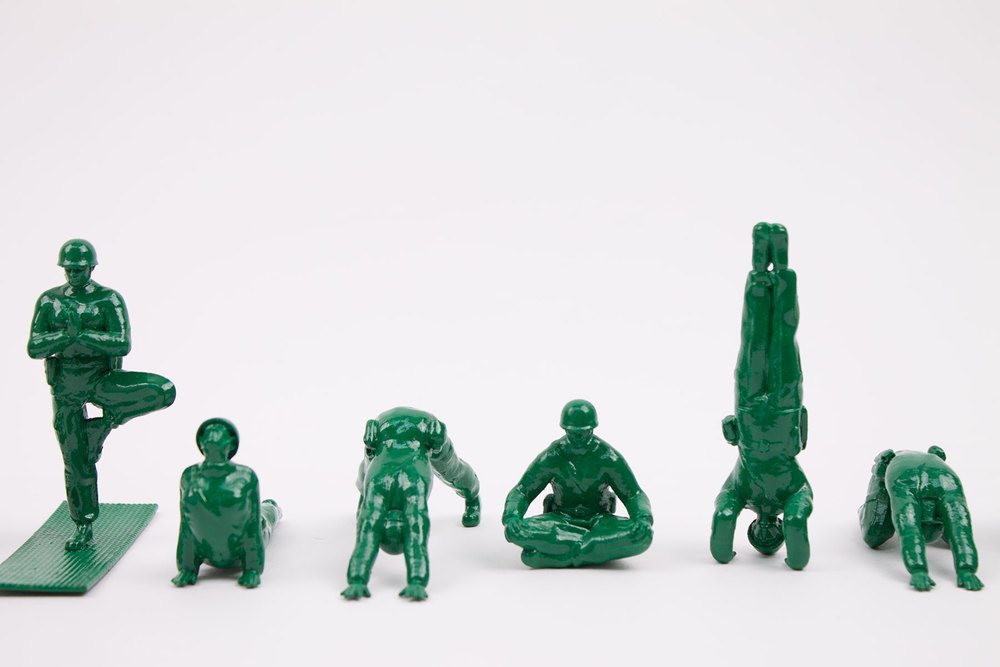 Now those same yoga army men are plastered all over the Interwebs. And Brogamats' other venture—yoga bags with zany plaid and burritos patterns, and ones that look like arrow quivers—has taken off as well. From Buzzfeed to New York Magazine to Cosmopolitan and even Fox News—Brogamats may have had modest beginnings, but now it's garnering some serious attention. From the outside, it seems like Dan is enjoying some mad overnight success.

The funny thing about "overnight success," though, is that it never actually happens overnight. In a tale part neo-American Dream and part Internet fairytale, Dan's company first gained momentum through a Reddit thread over a year ago. From there, a Kickstarter campaign (featuring the "peaceful action figures") met 270% of Dan's initial goal. Read and weep, closet entrepreneurs. In any case, we had to catch up with Dan and get his take on all this "overnight" success.

Describe your process with Kickstarter. What tangible benefits and risks do you see with small companies utilizing this forum? How about investors?

There many advantages to having a Kickstarter campaign. First of all, it's easy to corral together a forum of like-minded individuals that want to help shape the project. This crowd is the most active and engaged Internet community I had ever seen. I was able to ask my backers about real-time product decisions and they chimed in INSTANTANEOUSLY on a massive scale. Something like 70 voices replied in a matter of seconds. I shaped the product with this linked group of strangers who wanted me to succeed. I didn't have any money, in fact I spent only $1400 total on the Yoga Joes project before the Kickstarter video went 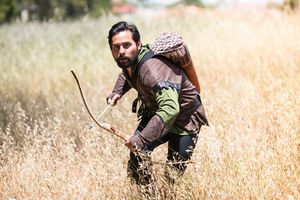 up. Kickstarter was my focus group.

The risks are minimal, though someone could potentially steal your idea before you have a chance to execute it. Once I climbed down the production rabbit hole a little bit, however, I realized how hard it was to make your own plastic action figures. So I wasn't too worried with this specific endeavor.

Another risk was that I would fail publicly among my hip designer friends. I came to the conclusion that if I did publicly fail, no one would really remember after awhile. And, to be honest, the idea of throwing my still-beating heart out on the public stage was kind of exciting. Even if I did fail, I'd know at least I had the stones to risk public shame with a project I was passionate about.

Kickstarter has been linked with the emerging sharing economy. Based on your experience and research, what predictions can you make about the future of this form of economy?

I think it's becoming very common now in the hip startup world to have a product up for "pre-order" well in advance. With this, you don't have to risk making 10,000 of a product that doesn't sell. It's happening with Chubbies Labs and Beta-brand here in San Francisco. They put a product up for pre-order, and only if it reaches a certain threshold of orders do they actually make it. And it works, people like their products more.

Perhaps someday, big companies like The Gap or Chevrolet will adopt this scrappy pre-order approach to avoid losing money on bad inventory.

Let's talk about Yoga Joes (the army men in yoga poses). In the past few years, there has been a movement

among current and former military members to turn to yoga—both for emotional and physical reasons. Do your army figurines represent this? Were you inspired by something else entirely?

I really just thought Yoga Joes were funny; eventually, I saw that they aligned with my ideas to rebrand yoga. Yoga Joes were born in a San Francisco coffee shop, while I was having coffee with my friend Paul Simmons (of popular comedy sketch "Don't Watch This Show LIVE!").

I thought maybe Yoga Joes could get more men and young boys into yoga. I also thought it could help military folks—as it is having enormous benefits in treating PTSD in veterans. I was blown away by the response from the military! One U.S. captain even messaged me from the field saying that he uses yoga to "play peace after playing war."

And the fascinating thing is that it was on a global level. I've been getting messages and orders from yoga instructors that teach vets in Australia, Israel, Europe, Canada, and Okinawa. As well as just general yoga aficionados that happen to be in the military all over the globe. It appears the discipline and physical intensity of being a soldier coincides well with the practice of yoga.

During the excitement of the Kickstarter, I was also able to connect with some pretty amazing non-profits, like Veterans at Ease, which trains yoga instructors to help treat PTSD in military

communities. It was incredible to learn more about the problem, and how yoga can really heal people. We're talking about potentially using Yoga Joes as a fundraising tool for non-profits, devoted to bring yoga to veterans with PTSD. All of a sudden my funny project took a philanthropic turn.

In all honesty, I had no idea that this project would take this shape. I've received messages from families who are trying to reconcile life after service, and how yoga is helping them move forward. To have a product that can relate to them in any way, is so much more than what I intended for when launching this project.

Despite the name—Brogamats—your site is adamant to claim that your product is not solely intended for bros (or men in general). Is there any significance to the name "Brogamat?"

I wanted Brogamats to be inclu 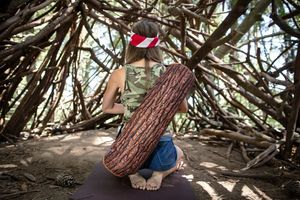 sive, and bring more guys to the flock. Yoga culture is often marketed to affluent, fit women (just look at Lululemon). But the benefits of yoga are extraordinary for everyone. Especially for chronic back pain. Every time my back starts to hurt, from sitting at my desk all day, I do yoga. It basically fixes my back—I feel like I could do a backflip!

So I feel that yoga is the antidote to numerous modern ailments, like back pain from sitting at a desk or low attention span from constant smartphone notifs. And its a pity that others may not consider it for them. Yoga has had an enormous impact on my life, and so I wanted to evangelize the sport to my male friends, my brother, and my dad to give it a try (still waiting on my dad, but he promises he's going to try it any day now).

So, in conclusion, is Brogamats for you? Yes . . . but only if you're not a snobby yogaphile who drops Sanskrit words in normal conversations. Marketing surrounding other yoga products tends to hinge on exclusivity, but the practice is too great not to share with all. Can a small, Reddit-rooted, business change the appearance of this ever popular fitness regime? Perhaps. And let's hope it does, as yoga is enjoyed by a vast spectrum of folks—not just Soul Cycle aficionados taking a break from juicing. As Dan's site puts it:

"Brogamats was founded on the belief that yoga practitioners defy simple categorization, and include people of all walks of life, all genders, all Lululemon budgets, and all levels of earthy pretentiousness. We are avid yogaphiles who felt the range of yoga products currently available was frustratingly narrow, so we decided to start designing our own."