What Happened When I Found My First Gray Hair 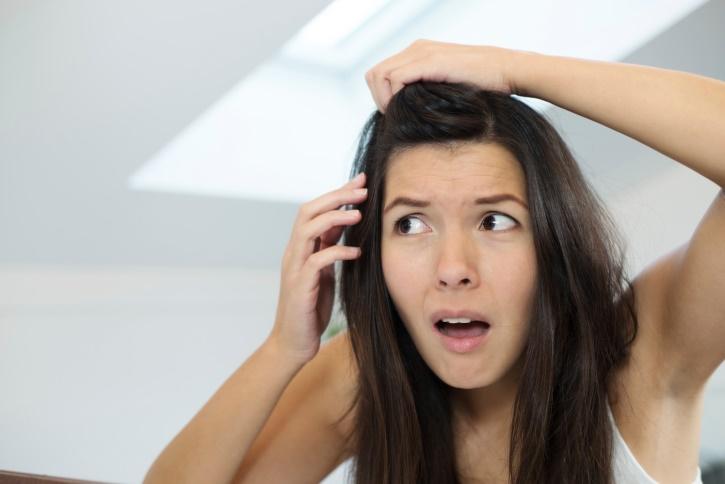 Despite the inescapable "Best Bikini Bods!" and "What Did She Do To Her Face?" articles plastered on nearly every daily paper and post I peruse, I never really thought about what "aging" meant to me until that afternoon, as I stood balancing on the tips of my toes in a deep lean across my bathroom sink, nearly face-planted into my mirror beneath the unflattering spotlight of incandescent bulbs. An abnormally iridescent streak of hair had caught my eye and attention, and I contorted myself for an adequately close assessment.

I'm at an age—29, the big 30 looming before me—where it is inevitable and expected to find lines and hairs and newly developed when-did-that-become-a-thing fat deposits where once there was only the taken-for-granted regenerative smoothness of youth. But when it came to my hair, time had yet to intrude on my accepted understanding of normal. Outside of a handful of blonde close calls, my mane remained a full, wavy, untamable white-girl-fro of auburn.

It turns out, however, that I would soon succumb to the follicular denotation of "old." That morning, in the private scrutiny of my bathroom, I found my first grey hair.

If the entire history of movies and television and advertisements is to be believed, the weathering of your womanly looks means you're less sex-able, less hire-able, less everything good-able. Considering this, I always expected my intro to grey hair would be filled with a kind of resigned sadness, if not despair.

No Country For Old Women

Sagging boobs, creaking joints, hormone cream—lady aging, we're told, is so horrific that an entire anti-aging industry is needed to stave off the impending atrocities that come with maturation. And of course, it's a catch-22—if you give in to natural-law-defying expectations and invest in "fixing" your appearance, you become a scrutinized spectacle a la Renee Zellweger.

None of this has mattered much to me for the last handful of years. I was raised to adhere to the rigid appearance norms of traditional America—but I've since been privileged enough to choose to live in progressive places like Portland, Oregon and Ithaca, New York, with significantly better perspective. My current culture doesn't expect me (as much) to be something or look like someone I'm not. I'm happier in my faintly-wrinkling skin, and I'm less influenced by what the world expects of me, because my life and my body are mine and mine alone. I get to define my own worth and place in this wonderfully messed-up and imperfect world.

Though I've taught myself to drown out the ubiquitous anti-aging onslaught, it has left me with an ingrained awareness. I vigilantly assess myself for any age-related changes and "address" them as needed. I was actively looking for grey hairs when I found the offending strand—long, oddly kinked, nearly transparent.

It could almost pass for blonde if it weren't so abnormally wiry. Nope, I accepted, grey had arrived. I had passed peak hair.

At this point, I could enumerate the damage of our underlying societal devaluation of women, and particularly those older than preschoolers can count to; I could lose my sense of self and question my value in my new state of physical deterioration. But surprisingly, none of these enraging and depressing discussions came to mind as I stood exceptionally close to that mirror, examining myself and, ultimately, my life.

So Much Life In So Little Time

I have perceived time differently throughout the relatively short span of my living. Every month felt like forever as I approached 18 and 21; since about 25, every year has transpired as a blip.

Staring at that strand of hair felt like a momentary pause—it was the first time the weight of my accumulated experiences registered for me in a physical way, in the very core of my being.

I remembered playing poker for candy with my brothers as a kid during our yearly trip to Shenandoah National Park. I remembered frustrating my classmates by debating (ignorantly) my AP Government teacher in high school. I remembered skiing and traveling and exploring with my family, us kids curled up in the minivan watching VHS tapes on a mini TV we bungeed between the two front seats. I remembered (mostly) the costumed parties and definitely-not-healthy amounts of alcohol enjoyed with friends during my times in college, and so many other uneventful, not particularly notable moments from days upon days that have built themselves into a life. I remembered everything, and everything was far more than I had ever really sat down and considered.

I have succeeded, I have failed, I have lived, and that hair reflected all of that. It held in its fibers the messiness and beauty of all of my years. How amazing it is that so much weight could be contained in something so light.

I, of course, pulled the hair out and tossed it in the trash. The hair would return with time, as would several wiry friends. But in the unflattering light of a 1980s light fixture in my bathroom, I genuinely felt like that was fine.

If you like this article, please share it! Your clicks keep us alive!
Tags
gray hair
Grey Hair
aging
anti-aging
personal essay
beauty