The Hilarious Brilliance Of #DudesGreetingDudes, The Anti-Street Harassment Hashtag 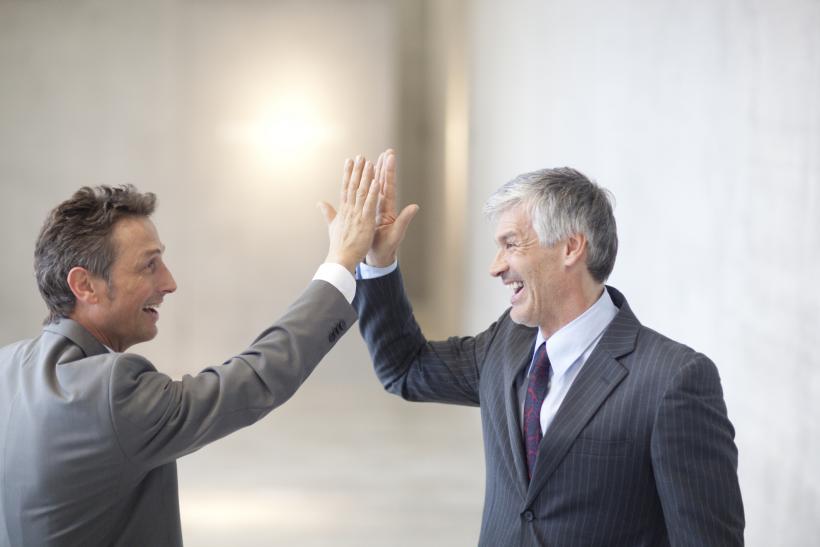 Street harassment. So hawt right now. Both in that daily occurrence way (if you’re a woman out walking around, I’m sure I don’t have to tell you that) but also, currently, as a topic in the media. And I intentionally use the term "topic" although others actually have the audacity to use the term “debate.” There are those, like author Steve Santagati (spoiler alert: He's a straight white guy), who assert that women are/would be into street harassment if they were attracted to the men catcalling them. He also claimed, in his ludicrous, mansplain-erific interview on CNN this weekend that: “There is nothing more that a woman loves to hear [than] how pretty she is.” Also that women should be "strong" and leave New York if they can't "take it."

And if you spend any time at all online (or, you know, on the street), such sentiments are, crushingly, everywhere. Men are decrying from their social media soapboxes that they simply "don't want to live in a world where they can't 'just say HI'!" The fact that women continuously shout from their own proverbial rooftops that they don't feel safe because of street harassment and are uncomfortable literally just moving through the world doesn't, apparently, matter. Even when women die for turning down men's advances. Even in the face of the tireless activism of those like Feminista Jones and her #YouOkSis anti-harassment campaign, which highlights the devastating and dehumanizing experiences of innumerable women.

To skewer that nonsensical and offensive claim is the brilliant and hilarious Elon James White—comedian, writer and founder/CEO of TWiB! Media.

Dudes. If you feel society has lost it's decency, let's bring it back. Let's start the #DudesGreetingDudes movement! Say hi to each other!

These women don't get it. Y'all just want to say hi. What's wrong with hi?!?! So let's just leave them out completely. #DudesGreetingDudes

The hashtag gets to the heart of the matter, which he aptly captures in a few other tweets:

DONT MAKE ME FEEL BAD WOMEN JUST BECAUSE YOU DONT FEEL SAFE. BETWEEN YOUR SAFETY AND MY FEELINGS, OBVIOUSLY MY FEELINGS ARE MORE IMPORTANT.

And these excellent examples capture the same sentiment—just with a bit of incisive humor:

You see a dude in a nice suit, just roll up on him like "Damn. You wearing that suit. Hmm Hmm!" #DudesGreetingDudes

"CAN I TAKE YOU OUT TO LUNCH? I DONT SEE A RING ON YO FINGER." #dudesgreetingdudes

You see a dude looking all hard & shit. Roll up on him like "Aye yo, smile, son. Damn." BRING SUNSHINE TO HIS DAY. #dudesgreetingdudes

And of course, others have offered up their own examples, fueling the hashtag's hilarity and, hopefully, raising at least a smidge more awareness and critical thought on the pervasive issue:

It's No Shave November, bro. All I'm saying is your beard makes me smile. You should never shave. What? Why you mad? #DudesGreetingDudes

*Grabs a dudes arm as he walks pass* "Hold up why you moving so fast?...You in a hurry? Slow down Bruh" #DudesGreetingDudes

Bruh I can't COMPLIMENT you? I'm saying! *gets ignored* You know what? Fine! Those Jordans are scuffed anyway! #DudesGreetingDudes

"You can't even take a compliment bro? Fine, you look fat anyway!" #DudesGreetingDudes

Damn dude, your guns are on point. Why wear that shirt if you didn't want the attention. #dudesgreetingdudes

The thunderous applause from women who support this campaign demonstrates that men can catalyze smiles on the faces of women they don't know—ignoring our plight and ordering us to grin just isn't the way to do it.