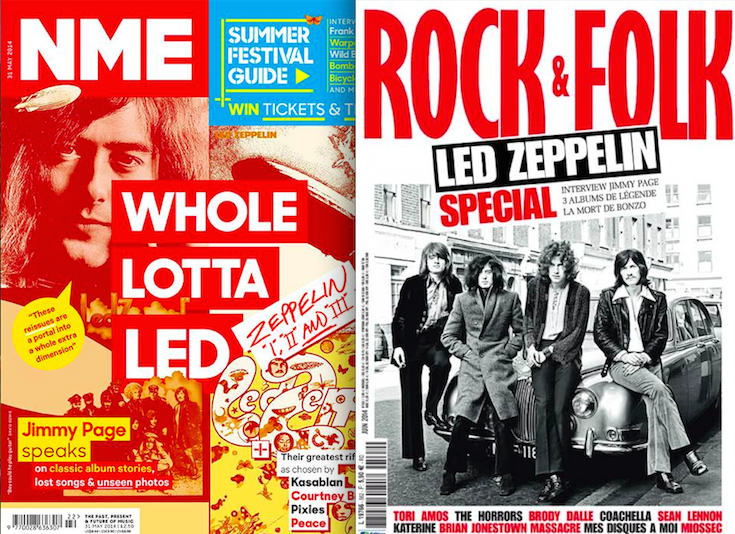 As the great William Shakespeare once (roughly) wrote, "to tear up a £500 million contract, or not tear up a £500 million contract. That is the question." Following in the steps of this magnificent man, a modern-day Brit is (supposedly) pondering the same great human question. Robert Plant, lead singer of Led Zeppelin, may or may not have shredded a contract worth 500 million pounds (about $792 million) for a Led Zeppelin reunion tour.

Plant's reps are denying the allegations but perhaps more troubling is that a whole new generation of teens have only this messy, rumor-filled kerfuffle and "Stairway to Heaven" with which to remember Led Zeppelin.

Not on my watch.

"Stairway" is cool and all (it may or may not have played a role in my 4th grade science project), but Led Zeppelin had far greater songs. Thus, it is my solemn duty to inform you all that there is much more to this band beyond this emotional classic about a woman who certainly must be in massive credit card debt. Much, much more.

Behold, Led Zeppelin's jams that are far superior to "Stairway." I did my best to find epic live versions of each song, but you also need to listen to the studio versions for homework. Because, legends. Duh.


Ever want to test a new friend's cool factor? Have her listen to "Kashmir." If she dislikes it, scream NEXT. Not only did Plant write the hypnotic lyrics while he and guitarist Jimmy Page were driving through Morocco, but the group sought Middle Eastern, North African and Indian music for inspiration. This led (haha) to a transcendent tune that has captivated generations with its unique vibe and climatic approach. In fact, this song was up for a Grammy last year under the category "Best Rock Performance."

2. What Is And What Should Never Be

​
You might know this song from Silver Linings Playbook. This song blasts through an intense outburst from Pat (Bradley Cooper). The song's manic tempo and projection switch ups reflect Pat's own internal struggles. Meaning: this song makes that scene. From the psychedelic lyrics to the tonal battle, "What Is And What Should Never Be" is an unusual sound for any musician—but especially Led Zeppelin. This song is also not one of their more popular jams, so you'll look super cool if you drop your knowledge on this one in the coffee shops.

Even if you don't know this song, you're probably familiar with the iconic "ah-ah-ahhhhhhh-AH." This powerful, yet catchy, jam was written subsequent to Led Zeppelin's trip to Iceland. If you listen carefully to the lyrics, the guys reference Norse mythology. "Valhalla" is not a fancy way to say "vanilla;" rather, Valhalla is the ultra fancy hall where the souls of the best warriors kick it with Odin (the big deity in Norse mythology). Getting a little cocky here, aren't we boys? In any case, this song rocks hard and it's best played loud. Very loud.

Come on, you knew there would be a sexy song in here somewhere. In one of the more perplexing innuendos, we have "squeeze my lemon" in what I can only assume must be a handjob. Though, Led Zeppelin can't take credit for inventing this (you know they were giant plagiarists, right?). The credit instead goes to Robert Johnson, or Arthur McKay. Both artists used this metaphor in 1937. Besides that, "The Lemon Song" is more blues heavy than many of their other tunes. Bassist John Paul Jones really steals the show with this one. I think we all know that it's a rare day when bass does that.

Not only does this jam have a luscious Latin feel, but the lyrics are kind of hilarious. The song is about a man who waits for his lover in the rain. She doesn't show. He starts stressing and overanalyzing everything. Finally, he realizes that he was waiting on the wrong street the whole time! How silly! If you don't find this song relatable, you are too perfect and I don't trust you. Besides the awesome lyrics, John Bonham's drumming is totes terrific in this tune. Thanks to this cocktail of awesomeness, "Fool In The Rain" became one of Led Zeppelin's biggest commercial successes, though it (sadly) wasn't a part of their live set.

If you like this article, please share it! Your clicks keep us alive!
Tags
Led Zeppelin
contract
Robert Plant
Jimmy Page
John Paul Jones
John Bonham
Music
1960
1970
Stairway to Heaven
Kashmir
Fool In The Rain
The Lemon Song
What Is And What Should Never Be
Silver Linings Playbook
bradley cooper
The Immigrant Song
heartbreaker
Sex
hand job
When The Levee Breaks
Moby Dick
high on history
legend