The Stich In My Side: Renavigating Racial Identity Through Lilo & Stitch 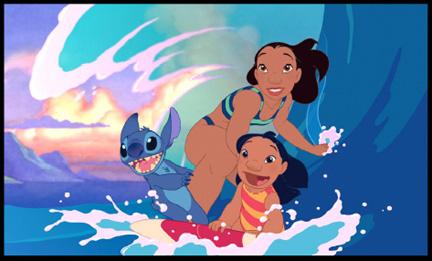 While Lilo & Stitch masquerades as a cartoonish, feel good science-fiction comedy, the real themes of the film touch on a much deeper emotion—a sense of family, of belonging—that’s almost impossible to capture in words. The film had the power to help me process my own childhood as a second-generation Japanese American, and to see value in my family’s cultural traditions.

That said, I wasn’t sure what to expect before I first watched it for the first time. I’d seen the subversive, genre-bending trailers featuring other well-loved Disney films. I thought the little blue fuzzy alien noisemaker was cute. But I’d avoided the film in theaters because it seemed, well . . . childish. I was at the perfect age (fifteen!) to consider myself too cultured for the sophomoric pleasure that was an “animated family movie.” But when I finally did watch it, I quickly developed a deep level of respect for Lilo’s admirable gift of coping with alienation with creativity and humor, relying on her own cultural traditions.

In the film, Lilo’s experience as a Hawaiian is deftly juxtaposed with Stitch’s daring alien escape and crash landing on Earth to create a relatable and entertaining story. Originally, Kansas was slated to be the backdrop, but creator Chris Sanders saw a map of Hawaii and immediately saw potential:

“Animation has been set so much in ancient, medieval Europe . . . to place it in Hawaii was kind of a big leap. But that choice went on to color the entire movie, and rewrite the story for us.”

Sanders and co-writer Dean DeBlois had enough creative control to re-center the film around the theme of Ohana as family, consulting with two of the voice actors, Tia Carrere and Jason Scott Lee (both Hawaiian and multi-ethnic), to rewrite the dialect and dialogue in an authentic and culturally tolerant way.

While Hawaii was annexed in 1898, it didn’t become a state until 1959, over sixty years later. Thus, Hawaiian culture is a rich tapestry of traditional values and language with American influence, and Lilo & Stitch does an excellent job of celebrating this blend, while ensuring none of the characters become stereotypes or caricatures.

Lilo’s family has a strong focus on their collectivist culture—family, the sense that “no one is left behind or forgotten,” is their driving motivation and priority. Nani works hard as her younger sister’s guardian to ensure that their family is preserved, because she knows that comes before anything else.

In my own family, my mother immigrated to the United States with my grandmother at a young age. Her upbringing was a mix of Japanese traditions and American ones, and she raised me with a similar focus. I was taught that family is more important than anything else, because family is the strongest bond you can have. It’s an idea that’s drastically at odds with the traditional tenets of American individualism and personal success, but not entirely incompatible.

My mother made every effort to teach me the same values of Japanese culture that she grew up with, raising me with stories of Japanese children’s folk tales and slipping Japanese words and phrases into our everyday vocabulary. Every summer, I eagerly anticipated the Japanese summer festival near our house, so I could eat green tea mochi and watch the bon odori dancers. I spent hours watching a much-loved Big Bird in Japan VHS tape and laughing as Bird Bird unknowingly tried to eat plastic sushi from a restaurant window display.

The fondest memories I have of my childhood are of my mother singing her mother’s folk songs to me, mixing English and Japanese words together in a language that I could emotionally comprehend, even at a young age. She has a rich, clear voice, even while singing quietly, and I could count on the memory of her voice in some of the darkest times in my life. I felt Japanese, but I didn’t look Japanese—I looked American. And while I heard her songs in both languages, I lived in a community and in a world where I felt like I didn’t belong.

But in Lilo & Stitch, Lilo’s everyday life is enriched by her dedication to cultural traditions. She dutifully attends Hula lessons at the urging of her older sister, sees surfing as a valuable tool for self-care, and deeply internalizes “ohana.” When Nani is told by the social worker that he’s coming to collect Lilo the nex

t day (seemingly for a future in the foster system), she spends a precious moment with Lilo celebrating their family, singing “Aloha Oe (Farewell to Thee)” by Liliʻuokalani, the last monarch and regent queen of Hawaii.

This is unlike most mainstream film; media that reflects my multi-racial childhood is sparse. In a 2012 USC Study, "Race and Ethnicity in Popular Film," across 100 top-grossing films of 2012, only 10.8% of speaking characters are black, 4.2% are Hispanic, 5% are Asian, and 3.6% are from other (or mixed race) ethnicities. Just over three-quarters of all speaking characters are white (76.3%).

But because of Lilo & Stitch, I understood the richness of my own cultural traditions for what they were: the source of my strength. Lilo is bullied by her classmates and ostracized for her ideas, but she’s never too afraid to stand up for her values. She’s very much an American, but also Hawaiian, and both cultures are an essential part of who she is. The film taught me that I didn’t need to feel insecure about my ethnicity as only “part-Japanese” or “part-American,” because that wasn’t the point. By creating my own cultural experience, I could define my own identity.

I stopped introducing myself as “a quarter Japanese” and instead became “Japanese American,” challenging people who dared tell me that I didn’t “look Japanese enough” and asked about percentages or my last name. Eventually, I became brave enough to even be an “Asian American” and started talking to other people online who shared my experience of racial ambiguity and feeling excluded by a culture that they deeply identified with. I stopped focusing on the parts of myself I felt were flawed and came to embrace every piece of me. And in that process, I became proud—of all of it.

The less time I spent worrying about fitting in with either culture, the more free I became to explore my future as whoever I wanted to be. It was a lesson that I wouldn’t have learned without Lilo & Stitch, and I still consider seeing the film (and crying my eyes out) to be an incredibly meaningful experience in my life. Because Lilo taught me to hope, for the first time, that someone else understood what I was going through.