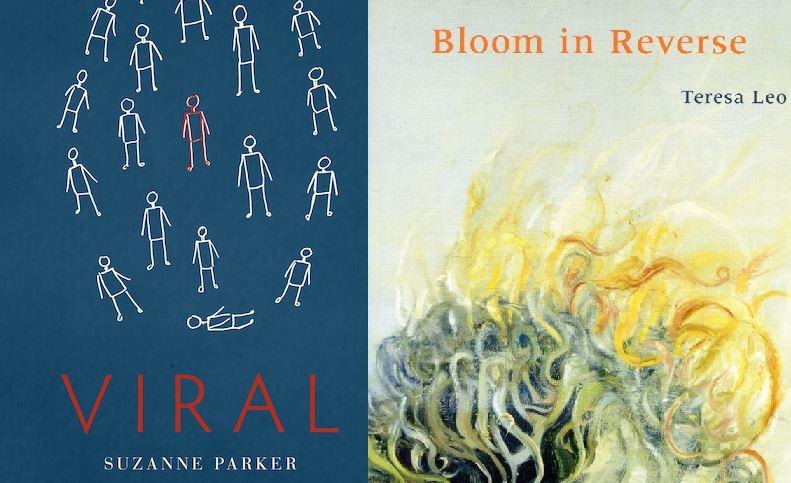 This story first appeared at the Women=Books blog by the Wellesley Centers for Women, and details five stellar poetry collections, all penned by women, published this year or last.

The suicide of college student Tyler Clementi (1991-2010) occasioned this collection of poems, and Parker’s decision to write from a range of perspectives (Clementi’s, his parents’, his tormentors’) deepens our understanding of the effects of cyberbullying.

The unrepentant speaker of “Because” offers thirteen couplets to explain his actions. In one, he claims, “Because the eye exists to watch and I/ owned the rights to the technology.” Whose rights does our society protect and at what cost? Anyone interested in the intersection of poetry and social justice should read this book. The following poem assumes the voice of one of Clementi’s parents.

It Is Hard to Hate the World

but possible. When sleep first recedes

and you have not yet remembered God

opened his hands and let a boy

against the teeth—when it is still

that half-death that is half-sleep

and he is crying for Lucky Charms

and your feet are already in slippers,

body rising to answer, then,

it is possible. Then, you are awake.

Bloom in Reverse, by Teresa Leo

Teresa Leo’s Bloom in Reverse includes a series of poems that forms an extended elegy for a close friend. The titles—“Eating Is an Act of Optimism,” “Memory Is a Kind of Broken Promise,” “Home Is a Four-Letter Word”—assert a definitive claim on the fractured world with the word “is.” Leo’s effort to define and make sense of loss includes an ongoing search for meaningful connection, as in “My Friend Asks What I’ve Been Doing Lately, and By This She Means Men,” “Online Dating,” “The Last Good Man” and “Love As the Circle-To Land Approach.”

Illustrating the cunning power of colloquial diction, one narrator lists the “practical” reasons two people ought not get involved: “the 300 miles, / the other relationships, what people//would think or not think.” One of the many poems in couplet form, “Elegy, Two Years Later,” showcases Leo’s gift for yoking image and emotional specificity. Midway through the poem, the speaker declares that she will no longer focus on the end of her friend’s life. The poem shifts abruptly:

no, I will not; instead

I will think of two women

in the dressing room of a department store

trying on prom-style gowns and lingerie,

one who gets stuck going into a dress,

the other struggling to get out—

each garment released with a plea

for the other to try it on

until one of them emerges

bound up in wads of fabric,

in an unexpected place,

and the other attempts to free her,

works the buttons, the zippers and snaps,

each movement of the fingers

to carry this image to the brain—

this one, exact image of fingers

doing and undoing, of hands

both holding and releasing.

Whether or not you’ve decided to donate your body to a medical school, Cadaver, Speak by Marianne Boruch will get you thinking. In the second section of the book (a 30-part, numbered sequence), Boruch conjures the speaking voice of a 99-year-old cadaver, a woman who observes the habits of the young anatomy students while reflecting on her life. Feisty, emotionally vital, the cadaver poses questions—“Well, any radiance is good, isn’t it?”—and reasserts her presence: “I was that old one who made you crazy, picking up every apple/ and putting it down.”

Boruch gained access to the gross human anatomy course (cadaver lab) at Indiana University’s School of Medicine through a Perdue University Faculty Fellowship for Study in a Second Discipline. The “guest” poet in the class, known to the cadavers as “the quiet one,” brings to her speaking character imagination, language, soulful wisdom and wit.

One of them here—the bookish one, who love stories—

from the ceiling. A saw so smart

it stops quick and cold

when a living hand fumbles in the way.

How can it know

their knuckles from my ribs,

their silence from mine,

in all this undone and undoing?

That’s not a question

but a story. Not a complaint but

a chant. Not a boat

but water beneath and ongoing,

whitecaps small and they jack-rabbit

vast, such a bright day

on the lake, and sky, and mountains,

snow on those mountains for my

is the one that screams

when it hits bonethat kept my lungs

keeping on, and pinned there,

restless years. The smoke of me

the light in this place.

A Woman in Pieces Crossed a Sea, by Denise Bergman

In this single-themed collection, Denise Bergman takes up the design, composition, construction, deconstruction, transport and reconstruction of the 350 pieces of the Statue of Liberty, unveiled in New York Harbor in 1886. Told in lyrical fragments, the narrative encompasses the science of Liberty’s creation, her “reception” on Bedloe’s Island (among those tasked with her rebuilding), and the response of citizens puzzling over the meaning and scale of this gift from France.

In the poem titled “Everyone’s In the Act,” the speaker asks, “Where to seat her at the table? / Do you invite her at all?” Bergman alludes to the vexed “freedom” Liberty symbolizes in “Shackles,” a poem whose title references the reality of American slavery and its legacy.

Not everyone’s ankles could snap open these shackles,

with the force of an edict

yet from their charcoal sketch inception, light

She snapped them in Colmar before leaving and packed them

and now their warning

as if the effort was yesterday’s with no time

to clean up the mess.

Isn’t that where symbol begins—

in remains of fragmentation.

“Wintering animals / live as thieves,” the narrator claims in one of Susanna Mishler’s poems, informing readers that we’re in the mind of someone conversant with “pack ice and blown snow.” In this debut collection, Mishler combines a naturalist’s attention to animals, geography and weather with a 21st-century woman’s daily life.

When the circus arrives in her Alaskan town, she writes, “More than anything, a circus audience /fears the ordinary. We want //the rope walker to fall and we don’t. We lean forward into that.” Mishler includes a series of poems about Silas, a neighbor child she befriends, and she writes of women in line at the grocer’s in “oil-stained jeans and work boots.” A 12-part poem titled “January Crossing” illustrates her gift for linked lyrics. Unlike many first books, this one does not focus on family; I’ve chosen one of the few “family” poems to present, below, in its entirety.

They can’t remember which one of us

saw wolves with them in the foothills.

Whoever it was, she smiled

in her father’s arms

and clapped her hands.

It was autumn, he told me, and the tundra

leaves were red. Everyone

if her hair was falling out

The pack trotted down a river bank,

Promise me, Molly, that there are wolves

hunting in the foothills of our sleep.

If you enjoyed this article and would like to read additional pieces by Robin and other WRB writers, please consider subscribing to Women's Review of Books. With reviews of women's studies books, as well as fiction, poetry, and memoir by women, it will appear in your mailbox bimonthly.