Turkey's President Helpfully Explains Women Are Not Equal To Men 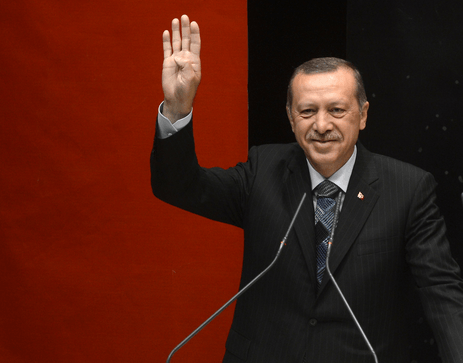 Let's kick off our overwhelming feelings of gratitude a bit early shall we?

While women in the U.S. continue to call out and combat alternatively misogynistic, fascist and terrifying measures—from street harassment and slut-shaming to sanctioned sexual violence and encroachments on our reproductive rights . . . at least the president of our country doesn't publicly state that women will simply never be as good as men?

Life is about small victories folks, so savor away.

Meanwhile, over in Turkey, President Recep Tayyip Erdogan—who never ceases to amaze with the bona fide blur of sexist garbage that pours from his mouth—has come out with another gem (at a Women and Justice Summit no less) to remind us vagina-clad humans just where we belong.

“Equality is turning the victim into an oppressor by force or vice versa. What women need is to be able to be equivalent, rather than equal . . . You cannot bring women and men into equal positions; that is against nature because their nature is different . . . Our religion [Islam] has defined a position for women [in society]: Motherhood. Some people can understand this, while others can’t. You cannot explain this to feminists because they don’t accept the concept of motherhood.”

I suppose it would be different, perhaps, if we could chalk up these antediluvian remarks to some 1940s societal backwash (as though being a feminist mother were a sort of inconceivable oxymoron) or even the vagaries of "cultural difference." (After all many Muslim women have described America's hatred for the burqa as a symbol of female oppression extremely patronizing, for example.)

But alas, Erdogan's words belie a sickening and systemic hatred of women that permeates much of the country. Turkey placed 120 out 136 on the World Economic Forum's 2013 gender gap index, and according to bianet.org, 235 women were killed by men in the first 10 months of 2014. Just this past October, 28 women were murdered by men—21% of them were simply seeking divorce.

According to bianet.org, 2014 has seen 235 women murdered, 88 raped, 499 battered and 95 sexually harassed—all by men. Human Rights Watch (HRW) echoes these staggering numbers of violence in their recent report, Turkey’s Human Rights Rollback: Recommendations for Reform, explaining that while a measure was introduced in 2012—the Law on the Protection of the Family and Prevention of Violence—authorities, like Erdogan, have failed to implement it. In fact, the vast majority of women raped, battered or murdered was done so by ex-partners and family members, most of whom enjoy total impunity for their crimes. The crippling apathy and phlegmatic attitude of the Turkish government toward violence against women in their country is so widespread, HRW explains, that many women had their lives taken while under police protection orders.

Perhaps most troubling of all is that Erdogan doesn't conceive of own beliefs as hateful. It's not sexist to simply acknowledge that women should be subservient, underpaid, beaten and perpetually pregnant. No, no. That's nature. That's the way God intended the paradigm to be. It makes his words a self-fulfilling prophecy; he's simply helping to implement what should be.

And he doesn't take too well to criticism either. Just this past September, journalist Amberin Zaman was openly targeted during his presidental election campaign—Zaman had remarked in a TV discussion that Islam "emphasized the community not the individual." Erdogan publicly lambasted her, called her a "shameless woman" who should "know her place" and encouraged the crowd to boo her as well. Zaman says she received a deluge of hate mail and death threats, "but felt that a complaint to the prosecutor would be useless as Erdogan’s words had “constituted a license” to attack her. ​

But, before I leave you with a sinking feeling of sorrow in your belly coupled with white-knuckled anger that Turkish women—even prominent journalists like Zaman—are too intimidated to speak up and brandish their fists . . . fret not.

This past Sunday, hundreds of self-proclaimed feminists gathered in Instanbul to protest the AK Party, Erdogan and Turkey's utter failing at protecting its female citizens. The crux of their recent anger stems from the cost of Erdogan's extravagant new palace coming in at a cool $615 million. Amid their chants of, "A budget for women, not for the Ak Saray!" the women also outlined four distinct measures during their demonstration:

1. The application of Law No. 6284 that calls for the protection of women from domestic violence

2. Harsher punishments for men who have murdered women

3. A budget for the effective protection of women

4. The application of the Istanbul Convention, also known as the convention on preventing and combating violence against women and domestic violence

It's all well and good to poke fun at the stodgy, ignorant sexist meanie . . . but this is the president of a country of nearly 75 million people. Until we acknowledge that one man's speech ceases to be just a speech when it represents a very dangerous and ubiquitous attitude that has permeated an entire country, we're failing to see the situation at hand, and we're failing every woman that lives in Turkey.