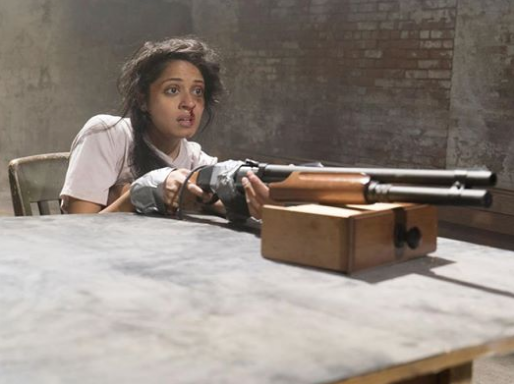 The night after watching Law & Order’s: SVU’s very special GamerGate engagement—"Intimidation Game"—I flew out of the country. I have wandered for a week through the cooing Canadian winter. My face is chapped, my Google maps doesn’t work—in truth, I couldn’t tell you where I am, but I know, beyond a shred of a shade of doubt, that I am not far enough away from my shame.

However, I should've known better than to be shocked—Law & Order has always served as a litany of America’s fear of queer folk, sex workers, kinky practitioners, trans women, the homeless, and those struggling through mental illness.

It’s a compelling tableau—the blue collar, “I’ve seen it all, son” detectives parse through a sea of permissive confusion. Gay people? Who have tattoos? And don’t eat meat? What will they think of next? I just need to get through today and put all these jokers in a jail cell so I can have dinner with my family that I am tearing apart with my devotion to this job.

We worry, we wither; we all have parts of ourselves, no matter how innocuous or mundane to others, that leaves our waking mind flushed with frustration. I have pimples on my chest; am I ugly? Am I not proud of enough of the rest of me? I’m fat; do my partners feel like they’re settling for my “winning personality”? I like to be called violent, malicious names when I’m being penetrated; are my partners afraid that I secretly think those things about them?

My dishes are dirty-dirty, grimed over with anxiety and self-loathing; dirty-dirty dishes dwell in the sinks of everyone close to me.

Law & Order: SVU is a kind of cleaning service. It won’t clean your dishes, or mine—but it offers a vision of a kitchen where all the messy nuance of American sexuality is tidied, sealed, and tucked away in Tupperware by unfazed, disinterested hands. It’s a callous form of comfort, one milked to the tune of syndicated TV marathons and a massive, almost ardent following amongst the very sort of people SVU crushes and suffocates under that lid labeled “Gays. Sex. Gross.”

Which is to say: Those of us who tuned into Law & Order: SVU’s GamerGate-themed episode were not hapless newbies.

We knew the score—savor this single hesitantly thrown bone because any further mention of Law & Order’s fluency on “gamer culture” detracts and obfuscates from the episode's utility as a very real and viable tool of sexual violence.

“Intimidation Game” combines Zoe Quinn, Brianna Wu, and Anita Sarkeesian—all targets of GamerGate’s sustained harassment—into one character. The “special victim of the week”—Raina Punjabi—has an obvious likeness to Anita Sarkeesian, complete with a backstory built on accusations of sleeping her way to her notoriety, a mythical origin that she begrudgingly time-shares with Wu and Quinn.

She is a veritable Voltron of the women GamerGate hates the most.

This hate is demonstrated, in the episode, with our harried detectives reading off the death threats levied by the fictional GamerGate expatriates—many of which are effectively verbatim, as in textually identical—to the threats that women in video games have received on an almost daily basis.

Law & Order could have left it at that. Faux-GamerGate send lots of threats to a woman who doesn’t deserve them. The detectives set up a sting, Ice-T ambushes their leader, and says “Capture This Flag, punk” and then batons him with his American flag lapel in full view of the camera. Detective Benson reads a book in the bath and has a quiet monologue to herself hoping that the victims of gamer culture’s violence can find the courage to heal like she did when she was sexually assaulted last season. And the season before that. And the season before that.

If you just wanted to capitalize on current controversy and prove yourself “fluent” in the ways of the wicked world, an episode like that would have met or exceeded the expectations of your audience.

But instead, Law & Order: SVU depicted a woman of color being kidnapped, raped, beaten, coerced into confessing that she is a slut and that women don’t belong in games, and then, post-rescue, confides to Detective Benson that Not Really GamerGate has already won, and that all hope for women in games is lost.

Correction: A woman of color clearly meant to represent actual, specific women who have been threatened with actual sexual and physical violence.

Super Double Correction: A woman meant to stand in for Anita Sarkeesian was subjected to the very real fears of Anita Sarkeesian, and NBC promoted it extensively on Twitter, knowing that GamerGate and their detractors would signal boost it, ensuring that any past, future, or present victim of GamerGate would be effectively exposed to the fantasy of their own suffering.

This episode transcends “titillation”—NBC now moves into the business of vicarious fantasies of (white, straight) male violence. This is not the salacious subsumption of a media frenzy. This is selling men their fantasies, and not the type of fantasies you know every man has, but the fantasies very specific men who have made those fantasies a public record. NBC appeased the appetite of men who stay up all hours of the night, threatening to murder the families of women who say their video games have some problems with racism and sexism.

Law & Order:SVU is not about confronting rape or even exhibiting it in an objective light. SVU is in the business of harvesting the suffering of women. By giving GamerGate such a massive and mainstream platform to live out their fantasies, they encourage men to show no fear in the face of consequence.

It’s a perilous precedent; if you tell a woman enough times that you’ll rape her, if you follow her to her house to prove that you’ll rape her, then a TV show watched by millions might let you vicariously live out that woman’s rape with no significant reproach of your disgusting, entitled behavior.

Depicting an actual woman’s actual fears of being abducted, raped, and beaten, to the delighted tune of her harassers, who have already begun using the episode as a promotional tool to recruit is not “furthering the discussion of misogyny.” It is misogyny. It is emphatic revelry in rape culture.

“Intimidation Game” doesn’t expose or confront GamerGate’s violence against women. It rubs their shoulders and whispers “you can do it champ, the dream can be yours.”

Mariska Hargitay has made a more than modest showing of support for survivors, but the show she works for, the show that made her a star and pretties itself in the mirror with PR she reaps, will force you to witness your greatest and gravest fears on network television if they think the hashtag will catch on.

Still: my dishes are dirty-dirty. I wish I could propel myself with the fury of my stamped feet into that confidence of being able to say “I’ll never watch this piece of shit ever again”—but on days so dark and afternoons so dull the allure of a clean kitchen cannot be denied.

And in that way, I am an accomplice to the violence perpetrated against other women. Women I know. Women in my community. And that will haunt me to the last level, on my last life, desperately rifling through murky darkness for the reset button.

NBC and Law & Order have perpetrated violence against actual victims of abuse and deserve to be held accountable—at the very least forced to call their mothers and tell them what they’ve done.

Now, we leave you with some live tweets from the episode, courtesy of myself and my colleague, Jody Amable.

I appreciate the effort but there's just too much surrounding the issue this ep is based on to stuff into 40 mins of TV. #gamergateSVU

.@warrenleightTV @nbcsvu You broadcast a handful of specific women's actual worst fears on national television. Your shame is indescribable.

Give you one guess as to which detective just said "Wrong move, player," before cuffing a suspect. #gamergateSVU

“These gamers hate her because she’s a woman?” YOU WORK IN THE FUCKING SEX CRIMES UNIT BENSON #gamergateSVU

I've stopped tweeting because I can't even find the words to express how ridiculous this episode is, even for SVU. #gamergateSVU

“What if we vicariously enacted the sexual violence threatened against specific women & advertised it so those women would see?” --@nbcsvu