Stop With The Haterade, #TheDress Will Save Us All 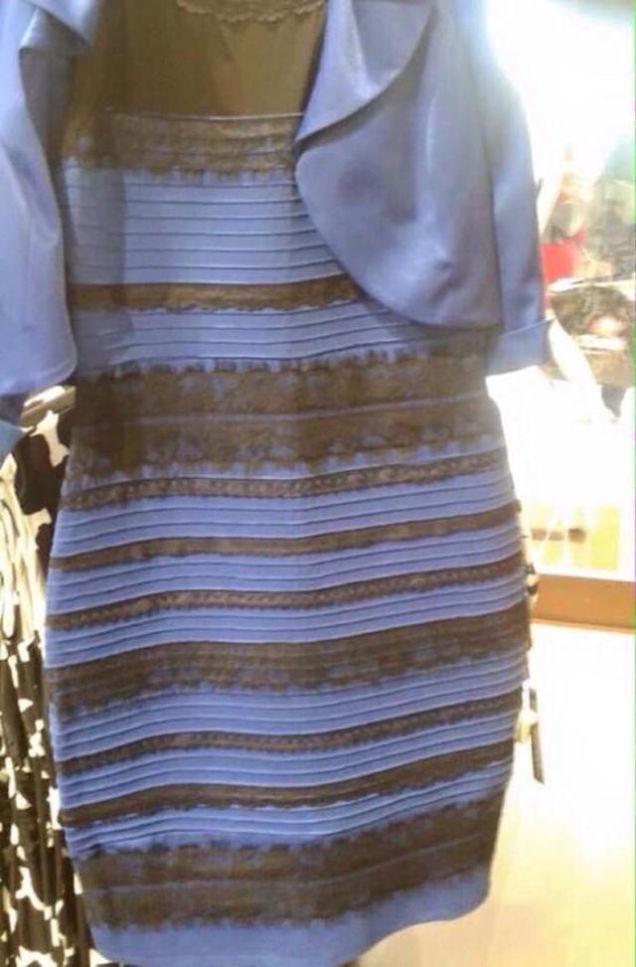 Are you rolling your eyes at this title? Are you sick of hearing about #THEDRESS? Tired of it being one of the top-trending topics on social media?

Then I’d request you to go look in the mirror and ask yourself why you chose to nosh on Haterade for breakfast when Cheerios and other healthful foods are so readily available.

So much has been written about what the Internet is doing to us as a society, how it is breaking us all down, dehumanizing us, tearing apart the fabric of human existence, bringing about the apocalypse, etc. And yes, the worst of humanity does pop up on the Interwebz, propagating mass violence, deadly trolling, and aiding in the circulation of terrorism recruitment videos.

But the Internet also does incredible things. Like document escaped llamas. And make a dress—posted on Tumblr with the desperate plea "guys please help me - is this dress white and gold, or blue and black? Me and my friends can’t agree and we are freaking the fuck out"—go super viral.

And in these cases, the Internet represents a means to our own salvation.

I’m not even being hyperbolic; I truly think this dress going viral is effecting positive change. First of all, when do color scientist people EVER get any media love? People like Dr. Jay Neitz, PhD, a color vision researcher at the University of Washington, had this mic drop of a quote in a Vice article on this perplexing visual matter yesterday:

"Now I'm going to spend the rest of my life working on this. I thought I was going to cure blindness, but now I guess I'll do this.”

Much like all the tweets, texts, and conversations swirling around the ether on the dress, this was comic gold. (And if you haven't been exposed to such glorious humor, the dress is doing you a favor by alerting you to the boringness of your social network—find better friends/people to follow on Twitter!)

Speaking of friends and loved ones, do you know how many people I’ve reached out to on this matter? OODLES. Chatting has literally never been easier! Whereas I’d normally have to come up with something original or pithy or warm to greet others with, now a simple “What color is the dress?” works as an opening. Have I gotten into arguments about it? Yes. Of course. The dress is black and blue but others are resistant to hearing the truth and, as is so often the case, there is tremendous backlash against it. This is to be expected.

However, I’ve actually also learned things about my friend’s lives. The dress is a point of contention, certainly, but it’s also a common ground, a jumping off point, a catalyst for connection. Since last night I’ve tweet-connected birder friends from across the country, learned our dear social media superstar is eyeing new glasses, discovered that a friend has no goddamn clue what to eat for dinner, and decided I might text an old fling I haven’t spoken to for a year (that shit flamed out like a supernova) because HOW FUNNY AND WEIRD WOULD IT BE TO SUDDENLY HEAR FROM ME “WHAT COLOR IS ITTTT.” (NB: probably too funny for me to pass up doing. Stay tuned.)

And none of this would have happened without the dress.

Fuck, I went to Walgreen’s for some diet coke and asked the cashier what she thought of the matter. We had quite the lovely dialogue, just two reformed white-and-golders bonding over our powerful transformation! It was a genuine give-and-take—and one that would have been denied us both had this shimmering, shifting frock not gone mega-viral.

And sure, William Shatner doesn’t care about the dress, but Kim Kardashian sees white and gold while hubby Kanye sees black and blue. The bottom line? William Shatner and Kimye all care enough to share, thus reinforcing our common humanity. The message is clear: WE’RE ALL IN THIS TOGETHER, GUYS.

How is anyone not inspired by this!?

To all those who are in a huff about social media being absurd and OhMyGodCanEveryoneJustCareAboutSomethingRealAlready—just stop. Tap out. Go offline, mute people on Twitter, sign out of Facebook—but don’t dismiss humankind! Just because I’ve spent 12 hours on-and-off looking at and discussing a picture of a dress doesn’t mean I’m any less committed to eradicating the social ills of the world. By contrast, I’m more fortified to take up the sword against oppression; I’ve had innumerable chuckles and leaned on others—a healthy task that is very much a challenge for me!—when my world literally turned upside down as the dress went from white and gold to black and blue. This dress has been the best self-care I've engaged in since I cashed in a certificate for a massage I got last year for my birthday.

My life is at least 87% better since the dress went viral. A chronic insomniac, I somehow managed seven hours of uninterrupted sleep last night. Coincidence?? DOUBT IT.

The dress has saved me. The dress can save us all.

In conclusion: Say yes to #TheDress.

If you like this article, please share it! Your clicks keep us alive!
Tags
the dress
#Thedress
white and gold
truth
Friendship
blue and black
color
vision
Kimye
William Shatner
society
humanity
humor