The Truth About Twitter's Call-Out Culture 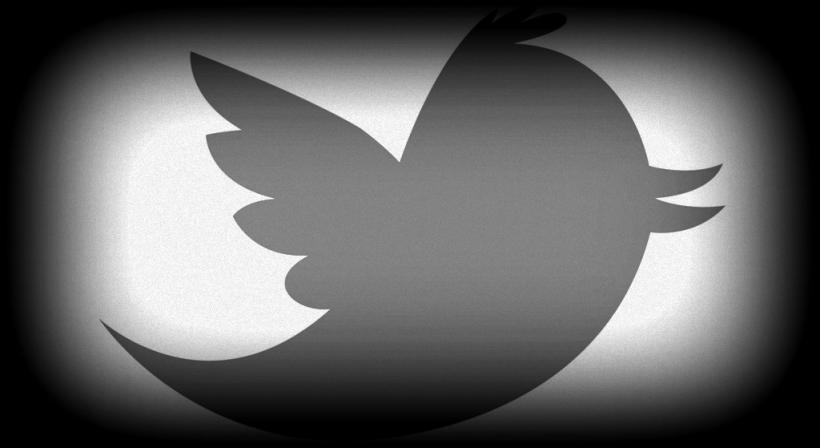 Social media can be a wonderful place for left community and discussion. But it's important to recognize that it's also in many cases a hostile environment.

Calling out call-out culture has become a kind of leftist sub-genre. Michelle Goldberg Jonathan Chait, Freddie deBoer, and many others have argued that call-out culture—the practice of publicly pointing out oppressive or prejudiced speech or language—is a problem. Call-out culture, critics say, ends up being mean-spirited, cruel, bullying, and totalitarian, encouraging people to wield identity like a club and oppression like . . . well, like oppression.

The most recent reiteration of this thesis is by Asam Ahmad at briarpatch magazine, who argues:

"What makes call-out culture so toxic is not necessarily its frequency so much as the nature and performance of the call-out itself. Especially in online venues like Twitter and Facebook, calling someone out isn’t just a private interaction between two individuals: it’s a public performance where people can demonstrate their wit or how pure their politics are."

Ahmad has a point. As writer and activist Julia Serano has said, the enthusiasm for policing language and calling out oppression in left spaces can "end up pitting marginalized individuals against one another," in ways that are counterproductive and even cruel. But it's interesting that Ahmad and others often argue that call-out culture is particularly centered in, and a particular problem on, social media. Because, while there are certainly leftists on social media, social media is not—and often adamantly not—a left space. 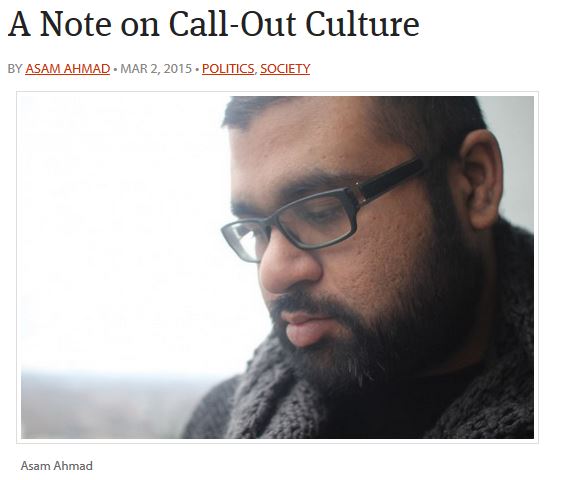 This is an important distinction when condemning call-out culture. In his essay, Ahmad seems to assume that all those in a given conversation are part of a single recognizable community, and are operating in marginal good faith.

". . . most call-outs I have witnessed immediately render anyone who has committed a perceived wrong as an outsider to the community. The assumption here is that the call-out is the intitial aggressive act; two people in a community are talking; one person calls-out the other; the person called out is hurt and angry. The one making the call-out has arbitrarily and nastily decided to 'define the bounds of who's in and who's out.'"

Again, that can happen, and I've seen it happen. But it's not the only dynamic on social media. Twitter is not a closed space; it's a semi-public venue. Everyone you interact with on Twitter isn't part of your community—many people don't want to be part of your community. And not everybody is engaging in good faith. On the contrary, folks with any level of visibility or reach on Twitter attract hordes of trolls and abusive harassers. Calling such people "racist" or "sexist" is not some sort of exercise in left hysteria; it's a simple statement of fact.

Ferguson activist DeRay Mckesson noted that since his social media presence has expanded, he gets copious death threats and adds, "I get called a nigger more than I've ever been called that in my entire life." Feminista Jones, a Black woman who has been a vocal activist against street harassment, gets death threats and constant harassment as well. For months, feminist video game critics and developers have been deluged with online vitriol and in many cases with credible death threats.

Even for those who don't receive such constant abuse, random drive-by bad faith harassers and jerks pop up with some frequency—often enough, anyway, that you don't automatically assume that the person talking to you is necessarily there to join you in a community dedicated to eliminating oppression and creating a better world.

Ahmad insists that, "There are ways of calling people out that are compassionate and creative, and that recognize the whole individual instead of viewing them simply as representations of the systems from which they benefit." That's no doubt true. But you can't necessarily blame people for not being compassionate and creative when they've got dozens of interlocutors a day shouting racist or homophobic slurs at them. When you have gamergaters spamming your mentions demanding that you answer transparently idiotic questions about ethics in games journalism, you may not then have the patience to calmly explain what intersectionality is to the next clueless but well-intentioned leftist who comes along.

Again, this doesn't mean that Ahmad's analysis is wrong. Leftists need to give each other the benefit of the doubt and try to build community where they can. But I think it's important to understand that a great deal of the ugliness on social media is not intracommunal leftist ugliness. Social media cultivates many great left communities, but it's not just a left community. Leftists on social media, and particularly leftists from marginalized populations, have serious, reasonable concerns about their emotional and physical well-being when they interact on those platforms.

If we want to call out call-outs compassionately, I think we have to remember that context. Otherwise we risk blaming people for trying to protect themselves. Social media can be a wonderful place for left community and discussion. But it's important to recognize that it's also in many cases a hostile environment, where calling out can be one defense, and one way of asking for help, against people who are determined to hurt you.