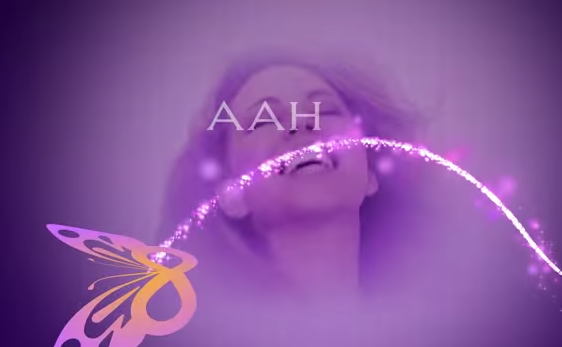 Gender is over here, with the butterflies and the rainbows. Bodies are over there, dancing in someone else's video.

Pop and R&B videos tend to put gender as far to the front of the screen as they can reasonably manage.

In Nicki Minaj's "Anaconda," Minaj and various background singers gyrate and slither about in more-than-revealing garb. In Robin Thicke's "Get Her Back," the singer's bruised face is front and center as he indulges in self-pity and stalker fantasies. In both (exemplary) instances, the gender of the singer—female or male—has everything to do with binary-ed imagery and presentation. And, of course, in both videos, the body of the singer—male or female—is lovingly and lasciviously centered throughout.

Mariah Carey's latest lyric video however—"Infinity"—barely has her body in it at all. But it gets across its obsession with gender in other ways. Carey has always reveled in uber-feminine, girly girl imagery: what else can you say about an artist who has titled albums Butterfly, Glitter and Charm bracelet? The video for "Infinity" cheerfully follows through on that predilection, with pink butterflies trailing streaks of light through sparkly Disney starscapes, rainbows arching above fluffy clouds and the word "Infinity" written across the screen in curlicue cursive.

The lyrics, for their part, reiterate the stereotypically feminine experience of love love love ("I was yours for eternity/there's an end to infinity") complete with a red valentine heart dissolving into a red splotch that suggests tears more than blood. And finally? You've got Carey's trademarked higher-than-high whistle note delivery, and the more breathy than orgasmic repeated "ooh" and "aah."

Again, what's striking here is the extent to which the video's feminine gender is telegraphed, semaphored, and generally insisted upon with barely any reference to actual women or girls. Mariah Carey's face floats about the screen in neon strobe-lights, but for the most part the only visual reference to human flesh and blood is that saccharine valentine heart and its crimson dribblings. The femininity of the video is virtually all based in conventions; it bears only an arbitrary relationship to actual people who are women.

In fact, contradictorily, Carey's video is probably more stereotypically feminine sans women that it would have been if it was filled to the brim with a gyrating Carey and a bevy of background dancers. Images of sexy women, as in that "Anaconda" video, aren't necessarily there for men however—I strongly suspect that Minaj's audience is predominantly female, and she's more-than-aware of a potential lesbian gaze. (Or heterosexual admiration.)

But still, sexy women dancing does at least imply a potential point of interest for some men. Whereas "Infinity," in its preciousness and aggressive sparkle, seems almost scientifically designed to chase men screaming from the room if they have any sort of stake in traditional masculinity. "Argh…the butterflies! The butterflies! They burn!"

All of which is a little counter-intuitive. Gender is generally associated with bodies. Bodies are, you'd think, what with their various bits, the main things that are gendered. But as "Infiinity" shows, this reasoning is inaccurate. Gender is over here, with the butterflies and the rainbows. Bodies are over there, dancing in someone else's video.

If gender is just about signaling gender, rather than about any actual person with an actual gender, you could logically conclude that gender doesn't exist; that it's just symbolic. Why should butterflies and rainbows and glitter be marked as "feminine" anyway? Pink used to mean male; now it's female. When gender doesn't refer to men and women, when references to men and women are actually less gendered than references to rainbows, the whole thing starts to seem kind of silly.

And maybe that's so. But, on the other hand, Carey's whole career is about her intense interest (at least as an artist) in various kinds of feminine presentation—a feminine presentation that obviously resonates with a lot of fans. If gender is a symbol, it's a symbol that has meaning to a lot of people. That meaning isn't just about what body you've got, and it isn't just about sex, though it has something to do with both of those.

Gender, Carey shows us, has its own sparkle, lighting up the butterflies in its own, overly saturated universe. Like infinity, it's more than just a made up dream.

If you like this article, please share it! Your clicks keep us alive!
Tags
Mariah Carey
gender issues
sexuality
masculinity
femininity
performance of gender
infinity