Managing Life With Bipolar Disorder And Without A 9-To-5 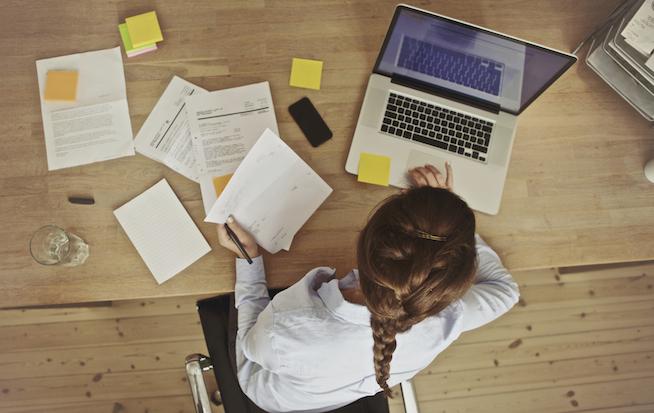 I sent an email, made a call, and succumbed to the fact that bipolar disorder was standing firmly between me and a normal 9-to-5 life.

Two months ago, I filed for disability for bipolar disorder. I had spent weeks dangling from tiring hands over a spiky precipice — or so it seemed. There were days of crying at my desk, days of inexplicable panic attacks in the face of a normal workload. Days began with never wanting to see the inside of my bland cubicle again, and ended early with the emailed excuse of a personal emergency or sudden illness.

After too many of these days over too many weeks, I sent an email, made a call, and succumbed to the fact that bipolar disorder was standing firmly between me and a normal 9-to-5 life.

At first, I felt free — I didn’t have to continually look for ways out — I’d found one.

Then came the paperwork, the probing phone calls asking about how often I had cried or showered, the neverending demand for proof of brokenness that became normal, but never any less anxiety-inducing.

It took weeks to get an appointment with my psychiatrist. More weeks until there were any medicinal effects of note. All the while, I was a willing test subject, but my time at home felt purposeless. I wandered from Twitter chats to writing to job applications, even to trying my hand at coding, but I still never felt a sense of completion or satiation.

In retrospect, I was spreading myself too thin. I didn’t know precisely what I wanted to get out of my time away from the office. Of course, the goal was to improve my mental health, but that was safely in the hands of my psychiatrist and therapist. All I needed to do in that regard was try out each different medication and suggestion given to me. As for the rest of my time, I was lost.

Of course, there were groceries to buy, walks to take, magazine pieces to edit, and podcasts to record — but that was all normal fare. What wasn’t was the absence of the direction a regular job had given me — the series of monotonous yet clear-cut tasks handed down to me by a supervisor. If I wanted that for myself at home, I would have to build it from scratch.

It began as a series of blocks of time: writing in the morning, then a walk. A nap in the afternoon followed by coding exercises. Baseball games at night with a smattering of Twitter chats. But soon this felt too hectic, overly scheduled, and often impossible to keep up with in the face of swaths of fatigue, anxiety, and depression.

I tried blocking enitre days: two writing days, two coding days, and one day for job applications. I fancied myself a Renaissance Woman — someone who could be a master essayist while doing freelance web design on the side.

Gradually, though, I realized that writing days were the best days — that they bled into other days with emailed prompts, bursts of inspiration, and spur-of-the-moment pitches. My JavaScript book, on the other hand, was often neglected until late in the afternoon, allotted an hour or so before being put aside.

The breaking point came when I took on my first freelance CSS project. I thought it would be simple, along the line of the practice tests I had taken online. However, once I received the files, I felt like I was drowning in foreign waters. I quickly emailed to say I couldn’t take on the project, that I needed to learn more before accepting paying gigs.

But I knew that my work in coding was done. I walked to the library, coding books in hand, and as I let them fall into the drop box, I felt light. I felt an ease that hadn’t come from six weeks of medications, therapy, and rumination. I knew I would dedicate myself fully to my writing again, and, for the first time in a long time, I felt in touch with myself.

It has been some weeks since my decision, and so many confirmations of my choice have come my way. An article I wrote for free led to a daily paying gig. An idle email to a local print publication landed me a freelance position. I’ve sent out pitches almost every day, and been rejected by most (so it goes), but I keep going, aiming higher than the time before.

But when my fingers find their places on the keyboard, I feel complete again. I feel calm. I feel purpose. I feel peace.

If you like this article, please share it! Your clicks keep us alive!
Tags
bipolar disorder
disability
mental health
mental illness