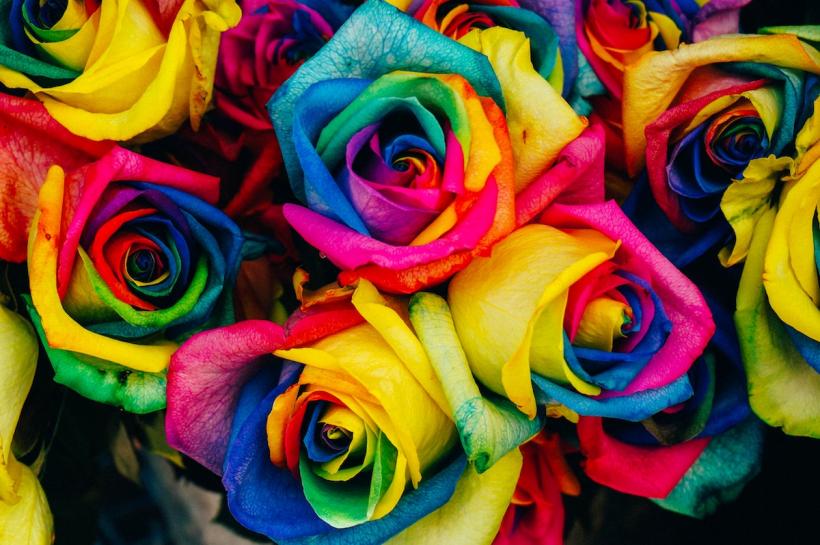 Aaron Wiseman created the most beautiful alphabet soup Twitter party for us, and it's raging hard.

Let’s face it. The LGBTQIA+ community needs a celebration of our identity now more than ever. “Our” president took away protection for transgender people to use bathrooms that correspond with their gender identity in February. Last week, he banned transgender people from the military last week and the Justice Department advised the federal appeals court to decide that Title VII of the Civil Rights Act of 1964 should not apply to sexual orientation, essentially allowing for bigotry against the LGBTQIA+ community in the workplace. Things are not looking good for my home team (that’s right — I’m here, I’m queer, I’m gender nonconforming, GET USED TO IT!).

But don't worry, y’all — Aaron Wiseman created the most beautiful alphabet soup Twitter party for us, and it's raging hard. Yesterday, he tweeted “it's ya fave bi guy & i'm starting up this hashtag so we can all make friends #LGBTbabes x,” and it's been nothing but rainbows ever since.

The diversity of the alphabet soup community has never been so beautiful.

Bashel Lewis brought his Black Boy Magic to the table, and keefe showed up with some striking Black femme stunners.

Kutiya showed the ups and downs of being a gay Indian man.

Being gay and Indian is fun but difficult im just glad i found someone I can relate to #LGBTBabes pic.twitter.com/rqpXGSzMOs

Angela Dumlao rocked my world with their gorgeous portraits.

I heard we're doing a thing.

And, to be honest, I’m beyond jealous of Billy’s make-up game.

rhiannon gave a (much needed) reminder not to judge someone’s sexuality based on their appearance.

I know I look str8 but I like girls too #lgbtbabes pic.twitter.com/d7HMQ3pRtd

Not able-bodied? No problem.

Madison’s tweet showcased chronic illness and disability while ace ratcliff beautifully showed off their bisexuality alongside their hEhlers-Danlos Syndrome.

i heard this was a thing so i'm in! #LGBTbabes pic.twitter.com/jqulmjU8Ce

Some used the hashtag to make announcements and celebrate love.

My little queer heart burst with pride as Gloria and laura kleeber came out.

This is me officially letting y'all know that I'm not straight #LGBTbabes pic.twitter.com/yutBmRje1f

#LGBTbabes because i finally accepted myself and love who i am. this is me officially coming out pic.twitter.com/bkmieK5NSa

I gushed with joy as jasper revealed he’d be starting hormone therapy in a week.

And Emmy’s post about her moms was beyond beautiful.

Shoutout to my mamas who have been #LGBTBABES together for almost 20 years. I couldn't be more proud pic.twitter.com/3mosPPkyIA

But Wiseman himself truly astounded me.

I was lucky enough to speak with the 19-year-old Oregon native this morning about what prompted him to start the hashtag. He said, “Well, as someone who up until this last year was very uncomfortable and confused with my identity, never having anyone to relate or talk to really, I understand how discouraging it is to not have someone you feel comfortable with or someone you can relate to.

I ran away from home at the age of 15 because the family member I lived with heard a rumor going around my school that I had kissed a boy and when confronted by them, after I tried my best to explain, they did not accept that I found myself attracted to both males and females. They kicked me out the night of the confrontation and I've lived on my own ever since.

Having no one who I really felt comfortable with or close to I got very into social media because it proved to be a place where i could (almost) freely express myself. I built up enough courage to finally come out to my followers and friends I've made as bisexual and the love and support I had gotten was incredible. I had finally found a place where I had "surrounded" myself with positive and loving people who not only understood but supported me.

And honestly in the moment of me thinking up the hashtag all I could think about was how I felt that day and I wanted everyone, whether they were out or not, to see that there are so many supportive and beautiful loving people out there who simply understand them.”

So let the #LGBTBabes party rage on, my fellow rainbow darlings. You're beautiful. You're supported. You're loved. And you're perfect just as you are.