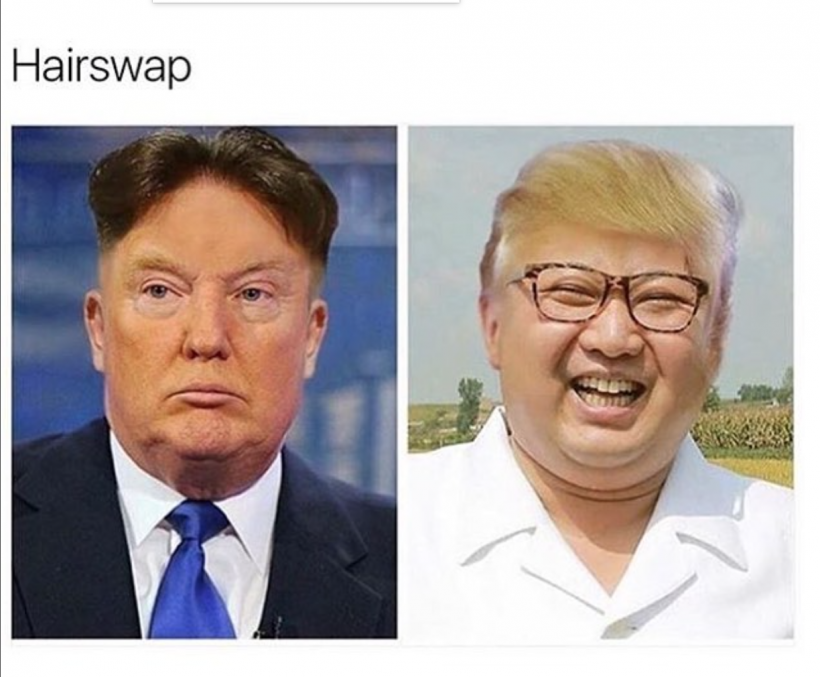 “We’ve got to be nice and cool, nice and calm. All right, stay on point, Donald. Stay on point. No sidetracks, Donald. Nice and easy.” (Image Credit: Instagram/donaldtrumpjokes)

Ever since 1984, August 11th has been Presidential Joke Day. The reason for creating such a momentous occasion? Beginning in 1982, Ronald Reagan decided to give Saturday night radio addresses in homage to Franklin Delano Roosevelt’s famous fireside chats.

Two years into these broadcasts, Reagan said, “My fellow Americans, I'm pleased to tell you I just signed legislation which outlaws Russia forever. The bombing begins in five minutes" for his soundcheck.

In the midst of the Cold War, it was probably a bit of dark humor that got a few chuckles. Unfortunately, there was a “hot mic” in the station and CBS and CNN heard every word. They didn’t air the statement or release the soundbite to anyone else, but it was news the next day. Most of America found it funny, part of Reagan’s down-to-earth demeanor, and thus August 11th was forever dedicated to the funny things our POTUSes do and say.

Past presidents have been “honored” since. George W. Bush said, “These stories about my intellectual capacity really get under my skin. You know, for a while I even thought my staff believed it. There on my schedule first thing every morning it said, 'Intelligence Briefing.'”

Barack Obama was lightly mocked for saying, “If I had to name my greatest strength, I guess it would be my humility. Greatest weakness, it's possible that I'm a little too awesome.''

And since November 8th, it seems that every day has been a grand opportunity to celebrate Trump’s, shall we say, bungles? Faux pas? Errors? Snafus? Indecent and unseemly acts of political barbarism and gaucherie?

Whatever you choose to call Trump’s somewhat less-than-presidential-much-less-good words and actions, today is the day to celebrate them by mocking them online. Thankfully (?) Trump has given us plenty of material to work with:

Trump is a fantastic Commander-in-Chief:

“He’s a war hero because he was captured. I like people that weren’t captured, okay?” — about Senator John McCain

“I know more about ISIS than the generals do. Belive me."

Trump is totally not racist:

“When these people walk in the room, they don’t say, ‘Oh, hello! How’s the weather? It’s so beautiful outside. Isn’t it lovely? How are the Yankees doing? Oh they’re doing wonderful. Great.’ They say, ‘We want deal!’” —, about Asian-Americans

“Look at my African-American here!”

He also knows a lot about economics:

“First of all, you never have to default because you print the money, I hate to tell you, OK? So there’s never a default.”

“I have borrowed, knowing that you can pay back with discounts... . Now, we’re in a different situation with the country. But I would borrow, knowing that if the economy crashed, you could make a deal. And if the economy was good, it was good. So, therefore, you can’t lose.”

He’s a friend to the females:

“I refuse to call Megyn Kelly a bimbo, because that would not be politically correct. Instead I will only call her a lightweight reporter!”

“She was the winner and she gained a massive amount of weight, and it was a real problem.” — regarding Alicia Machado, former Miss Universe

"I think the only difference between me and other candidates is that I'm more honest and my women are more beautiful."

“26,000 unreported sexual assults in the military-only 238 convictions. What did these geniuses expect when they put men & women together?”

He’d absolutely describe himself as humble:

“They won’t even give him stairs, proper stairs to get out of the airplane. You see that? They have pictures of other leaders who are … coming down with a beautiful red carpet. And Obama is coming down a metal staircase. I’ve got to tell you, if that were me, I would say, ‘You know what, folks, I respect you a lot but close the doors, let’s get out of here.’ It’s a sign of such disrespect.”

“My fingers are long and beautiful, as, it has been well documented, are various other parts of my body.”

“My IQ is one of the highest — and you all know it! Please don’t feel so stupid or insecure; it’s not your fault.”

But most of all, Trump is one of the greatest orators of our time:

“Well I really watch the shows. You really see a lot of great, you know, when you watch your show and all of the other shows, and you have the generals and you have certain people that you like.” —, on “Meet The Press,” trying to name his foreign policy advisors

“We’ve got to be nice and cool, nice and calm. All right, stay on point, Donald. Stay on point. No sidetracks, Donald. Nice and easy.” — at a rally in Pensacola, Florida.

If you like this article, please share it! Your clicks keep us alive!
Tags
donald trump
humor
Politics