Scaramucci Does NOT Heart Priebus: Drama Abounds In This Wildly Dysfunctional White House 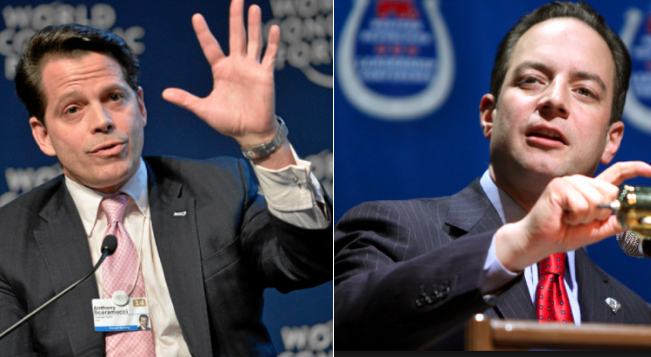 In that light, it makes sense for Scaramucci to refer to Priebus as “Prancer,” or just a deer emoji ... (Image Credit: WikiMedia & Flickr/Gage Skidmore)

Anthony Scaramucci’s rise to power as the White House’s communication’s director within the Trump administration-slash-biohazard has always been … interesting.

First of all, Priebus and Scaramucci do not get along. Yes, yes ― Scaramucci said, “I don’t have any friction with Reince.” But he also said, “We have had differences. When I said we were brothers from the podium, that's because we're rough on each other. Some brothers are like Cain and Abel. Other brothers can fight with each other and get along.” (The jury is out on which type of “brothers” Priebus and Scaramucci are, and who may or may not rise up against the other and kill him.)

In that light, it makes sense for Scaramucci to refer to Priebus as “Prancer,” or just a deer emoji (referring to a picture that was apparently circulated around the White House, but not, sadly, the internet). It’s brotherly!

Even more bizarrely, Scaramucci doesn’t report to Priebus at all. Instead, he takes his orders straight from the Commander in Chief ― an oddity in D.C. politics considering that the chief of staff is supposed to be in charge of hiring. (Hence "Chief of Staff," and not, you know, “part of the staff who’s kind of important, I guess.”) But then again, Trump and Scaramucci have become so similar these days that perhaps it’s natural they be joined at the hip and leave a pouting Priebus off to the side.

Now, “The Donald” and “The Mooch” seem to have found their common ground. They’re both  tanned men of finance who raised money for Democrats in the past. They both believe in hastily ridding themselves of employees who displease them.

And it’s somewhat undeniable that Trump and Scaramucci are made for each other. Or is it that Scaramucci gave himself a Trumpresidential makeover? After all, he said that Trump was a “hack” and “anti-American” during a 2015 appearance on Fox News. But that’s all in the past!

Now, “The Donald” and “The Mooch” seem to have found their common ground. They’re both  tanned men of finance who raised money for Democrats in the past. They both believe in hastily ridding themselves of employees who displease them. (Indeed, Scaramucci threatened to “eliminate everyone in the comms team and we’ll start over,” when he saw tweets from The New Yorker’s Ryan Lizza about the president having dinner with his wife, Sean Hannity, Bill Shine, and Scaramucci himself ― apparently loyalty is so unpresidential this year!)

They even make the same hand gestures when they speak. And apparently Comedy Central has noticed. On “The President Show,” Sex and the City’s Mario Cantone joined Anthony Atamaniuk to showcase the newfound love between Trump and his communications director and the bit is a delightful parody of our horrible downfall, if nothing else. Cantone states, “I’m going to fire so many people. I don’t know who it’s going to be, Reince, but I’m going to get to the bottom of the leaks in the White House. Do you hear me, Reince?”

Atamaniuk professes his love for “the ethnics,” and we can all laugh at the “45th and final President of the United States." For the moment, at least...

*Update: Since publishing, Reince Priebus has been replaced by former Secretary of Homeland Security, John Kelly.

If you like this article, please share it! Your clicks keep us alive!
Tags
white house
Politics
Trump
Scaramucci
Priebus