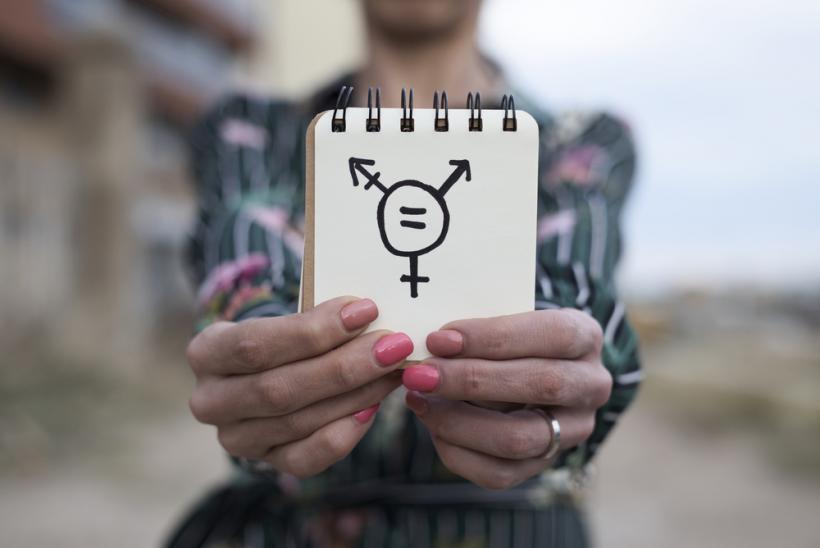 Is it possible to keep my trans family safe?

On Sunday morning, I woke up late and then had breakfast with my family. Sundays are some of my favorite days because as a busy low-income family we rarely have a chance to catch our breaths collectively, but on Sundays, we somehow make a little time. I don’t think that my family is unique in that. Sometimes my partner and I commit to staying off social media all day, which makes an already good day great. This week, for reasons I don’t remember, we stayed plugged in. Which is how I saw that The New York Times broke the news of a memo outlining the Trump administration’s plans to change the legal definition of gender, in order to define trans people like me out of existence. I confess that when I first saw the headline, I kept scrolling. I didn’t want to think about it. I wanted to clean my house, and play with my kid, and catch up on work leftover from the week. But since reading the news, my brain has been filled with questions.

How can I keep my trans family safe now?

Is it even possible to keep us safe? Is safety even what I should be worrying about now?

Briefly, according to the New York Times:

“The department [of Health and Human Services] argued in its memo that key government agencies needed to adopt an explicit and uniform definition of gender as determined “on a biological basis that is clear, grounded in science, objective and administrable.” The agency’s proposed definition would define sex as either male or female, unchangeable, and determined by the genitals that a person is born with, according to a draft reviewed by The Times. Any dispute about one’s sex would have to be clarified using genetic testing.”

As a trans man, this idea is legitimately terrifying. It’s not only the loss of rights, but it’s also what it represents.

What if they made it the law that who I am isn’t real?

Apart from the effects of laws themselves, we have to recognize the give-and-take between public opinion and what the government does (and does not) recognize. If the government says quite literally that trans people don’t exist, what will that do to the discourse? We know that the Trump presidency has emboldened bigots of all stripes, and we’ve seen an increase in hate crimes. And considering that this is coming at the same time as we’re seeing some virulent anti-trans ideas dressed up as “feminism” gain steam in the UK, I don’t think it’s unreasonable to be a bit freaked about the future right now.

But I’m not only nervous for myself.

My little family is visibly queer, and frankly, visibly trans. I’m a trans man, and my spouse is non-binary. We have one kid, and as a writer and a parent I try hard to be aware of his privacy while I write about my life, so I won’t go into the details of his gender. Suffice to say, we aren’t 100% certain he’s cisgender. And as a unit, as a family, we read as pretty freaking trans.

You Might Also Like: Trump's Announcement On Transgender People In The Military: An Act Of Selfish Cruelty (Shocker)

Navigating the world as a visibly queer and trans family was hard and sometimes scary on Saturday; I was overwhelmed by things like being called “ma’am” on the bus and wondering how best to advocate for my child once he starts preschool. But Sunday’s news turned the volume up on all of my fears, made it impossible to look away from them, and added new ones to the mix.

If they can make us legally not exist anymore, what else can they do to us? And how the hell am I supposed to keep my family safe?

The list of things I can do is quite short. One strategy is to fight. Another is to leave. The third option is to hide.

I could, theoretically, stop my hormones this week, put away my binder, and tell everyone to call me by my old name again. It wouldn’t make me cisgender, and it certainly wouldn’t make me happy, but by being less visibly transgender, it’s possible I could be more physically safe.

Some people will take that route, re-closeting themselves of de-transitioning to attempt to survive in a world where there is no space for them. Bitterly, I keep thinking that this is precisely what this administration wants and that they will see it as evidence that no one was ever really trans, we were all just playing dress up. But if it kept my family safer, wouldn’t it be worth it?

This isn’t my first rodeo with having my lived reality unrecognized by the state. In fact, in a way, I’m living it right now. I’m still early in my transition; I haven’t legally changed my name or my gender marker. My partner and I married before same-sex marriage was legal in our state, and although we had a big church wedding with a wild reception afterward, there was no piece of paper signifying our legal union, not for two more years.

The truth is that our family has always been bigger and stranger than what the government is willing to recognize and sign off on. Hell, I’ve been married for five years, but I still haven’t been able to change my legal last name to my married name. Even before coming out as trans, my life felt segmented into what the state saw, and what really was.

When my partner and I got married, many people asked us why on earth we were doing it. Why go through the trouble to have a wedding, they wondered, if we wouldn’t get any legal rights. We posited that the idea of marriage was bigger than what the state would and wouldn’t sign off on.

When I came out, I was afraid that being transgender would force me to become a transgender activist. It wasn’t that I didn’t care about other trans people, and wasn’t doing what I could to uplift them. But I was tired, and I was nervous. It’s scary to step out into the world with a shiny new identity, but so much scarier when you’re afraid that having that identity might become a full time job. I wanted to do other things. I wanted to write about things that weren't trans things. I still want that.

But I can’t stay silent while we are being attacked, I can’t pretend I have more interesting or important things to talk about. And realistically, I don’t have the means to leave the country, and the nature of my life and my work is already too public to make slipping into hiding under my old name a real possibility.

If I want to keep my family safe, I have one option left, and that’s to fight.

If you like this article, please share it! Your clicks keep us alive!
Tags
donald trump
trans rights
Transgender
transgender identity