Everything About Postpartum Bodies Is Different (And That's OK) 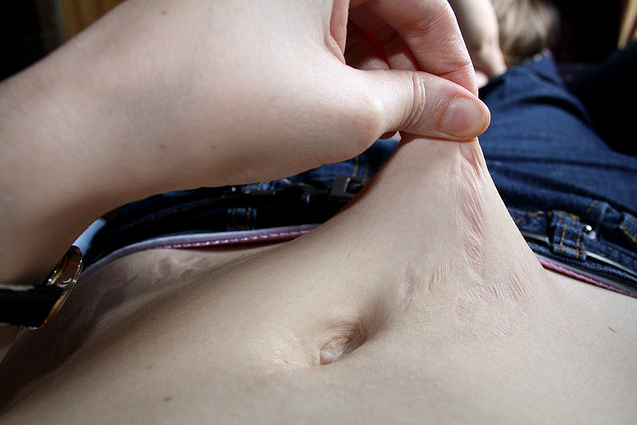 Pregnancy is so metal, I can't even tell you. So why do we treat postpartum bodies the way we do?

When Hanna Moore posted a series of pictures of herself on Instagram, she was hoping that sharing them would boost her self-confidence and maybe help other women feel more comfortable about their bodies. The photographs unflinchingly document what Moore's body looks like 10 months after giving birth to twins. In some of them, Moore is fully clothed; in others, she's wearing a bra and pants, putting the fading stretch marks across her belly on full display.

In spite of the fact that Moore is dressed more modestly in her stretch mark pictures than I am on an average summer day, Instagram removed the images, citing violations of “nudity and violence” guidelines.

Since Moore is definitely not exposing herself enough to break Instagram's too-naked rules (there's nary a nip-slip to be seen!), we have to assume that these pictures were removed because of violence. Which leads me to wonder what, exactly, Instagram considers to be violent about the physical changes that pregnancy can cause in a person's body.

Stretch marks are incredibly common. Not only are they frequently a part of pregnancy, but they can also show up during puberty or anytime someone goes through a period of sudden growth or weight gain. I myself am the proud owner of some pretty rad stripes on my ass, which I think only enhance the natural beauty of my derrière. There's absolutely no reason why anyone should be deeply offended (read: weirdo) about stretch marks, any more than they should be deeply offended weirdos about scars or moles or freckles.

And yet, here we are.

The way our culture treats postpartum bodies is completely messed up. For some incomprehensible reason, we want to maintain this myth that a body that has been growing a baby for nine months just completely sheds any evidence of that process within the first 24 hours after birth. There is so much shame and stigma attached to the puffy, sagging bellies, loose skin and purple-red stretch marks of the post-pregnancy body. Not only is there immense pressure to squeeze and shrink yourself back to your pre-pregnancy figure, there's also a huge lack of visibility and discussion surrounding what these bodies actually look like.

Spoiler alert: they look like bodies that have recently been filled with a quart of amniotic fluid, two pounds of placenta, plus a kid. And this is not a bad thing.

Pregnancy is so metal, I can't even tell you. So why do we treat postpartum bodies the way we do?

I also wish there was more discussion about the enormous mind-fuck that is the postpartum body. The way my body changed during pregnancy wasn't easy, but at least it happened slowly; I got eight whole months to adjust to my new shape and size. Then suddenly, over the course of less than an hour, I went from feeling like I was this life-bearing earth goddess to being deflated and empty.

My new body was literally nothing like any previous body I'd ever experienced. It wasn't the same as my pregnant body, but it sure as hell wasn't the same as my pre-pregnancy body either. My belly still stuck out, I was leaking from various orifices, and holy shit my breasts were comically large. My closet was packed with clothing that didn't fit me. I couldn't even pull my old jeans up over my thighs, but at the same time the maternity wear I'd been rocking for the past few months didn't sit right, either. Everything about my body felt completely foreign, and I got pretty much zero time to adjust to it.

On top of all that, people kept slyly working “baby weight” into the conversation, either in the form of compliments (“wow, you've lost so much weight already!”) or not-so-subtle questions (“so do you think you'll try mommy and baby pilates?”). I was inundated with images of celebrities who are strutting around in bikinis just a few weeks after giving birth, and even my obstetrician's nurse was offering me advice on how to get my “shape” back. So not only was I feeling completely baffled and awkward about my new body, but I got to recognize over and over that everyone else was uncomfortable with it too.

And now Instagram is deleting postpartum pictures because bodies that have birthed a baby are apparently too violent for their standards.

The good news is that eventually Instagram restored Moore's photographs, saying that they have been removed because of a “technical mistake.” Unfortunately, Instagram's crummy history with female bodies makes it seem pretty unlikely that Moore's images were deleted by accident. At least they can take solace in the fact that they have plenty of company when it comes to their attitude about postpartum women.

I hope that Moore keeps taking and posting pictures of her body, not only because doing so clearly makes her feel good about herself, but because her photographs are helping countless people. I want to celebrate the fact that there are folks out there like Moore who are willing to put themselves out there and be vulnerable in order to normalize postpartum bodies. I was never brave enough to take pictures of my body in the months immediately after my son's birth; all of my internalized crap about how I was supposed to look made it so that I could barely even look at myself in the mirror.

Maybe if I'd known someone like Moore back then, I would've felt better about myself. At the very least, I would have known that I wasn't alone.

If you like this article, please share it! Your clicks keep us alive!
Tags
Instagram
hannah moore
indecency laws of instagram
body image
being pregnant
the postparnum female body
what happens after you give birth