A Happy Death, Full Of Light And Color 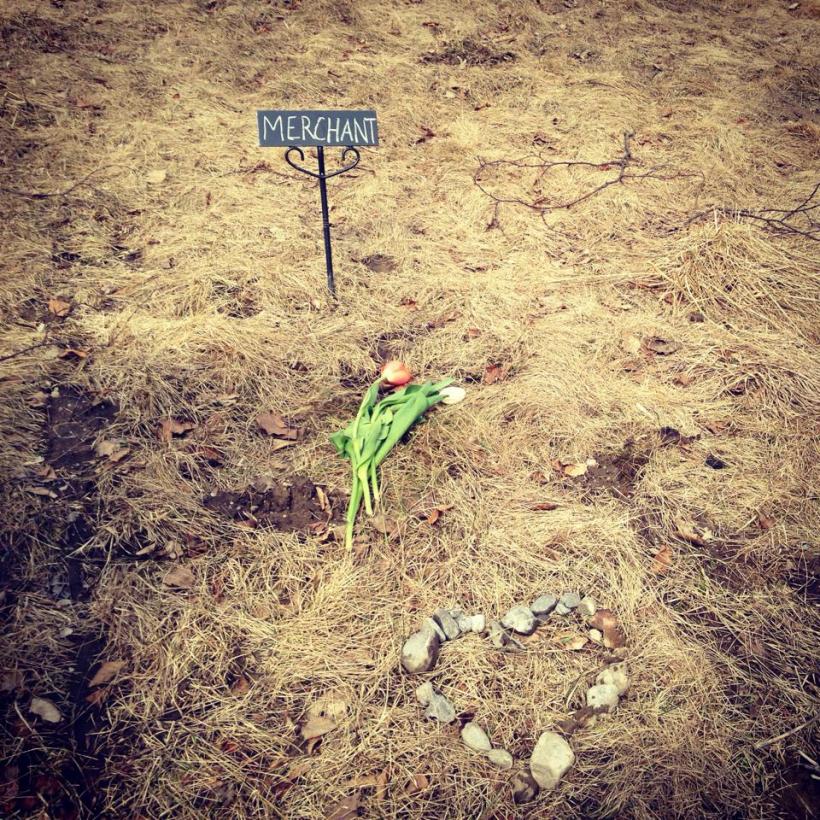 Alicia's grave is perfect. It's in a meadow, right at the edge of a little hill that slopes down towards the banks of a wide brown river; there are trees and, in the summer, there will be tall grasses and wildflowers.

"How was your weekend?" a coworker asks me on a Tuesday morning. “It was good. Really good.” As I reply, I'm running a brief diagnostic of the situation in my head. Do I give her an honest account of my weekend? Or do I gloss over how I spent the larger portion of Easter Sunday, and instead talk about egg hunts and ham dinners and funny things my kid said? Will she think it's weird or gauche if I talk about Alicia? I probably shouldn't mention Alicia.

So when my coworker asks if we got up to anything special, I blurt out, “Yes! On Sunday we drove out to see my friend's grave. Monday was her birthday, and she always said that no one would visit her on her birthday. So we went to prove her wrong.” I end on a sort of gasping laugh, hoping to convey the happiness of my story, but it doesn't really work. Instead, my coworker does a brief double take, then creases her face into an awkward frown. She wasn't expecting to hear about my dead friend. She's not sure how to respond. “Oh, I'm so sorry,” she says finally. “I'm really sorry to hear that.”

I don't want her to be sorry, but the fact is that apologies are our culture's standard reaction to death; they function as an inadequate place-holder for all the other words that should, but somehow don't, exist to describe our feelings at these times. Sorry unfolds its short string of letters into an abundance of meanings—that the person has been there, they know what it's like, they understand, on some level, how unfair it is. Sorry translates both as I wish your loved one had never had to experience pain or death and also someday you and I, too, will be dead. Sorry, in this case, is a combination of regret and compassion and a funny resignation to reality.

So I get why my coworker is sorry, but still, I wish she wasn't. I don't want her pity; I want her to know that I feel good things about visiting my friend. “It's OK,” I say, pulling up a picture of Alicia's grave on my phone. “Look. Isn't it pretty?” My coworker seems nonplussed by the photograph, then quickly changes the subject. Instead of death, the conversation veers towards favorite brunch spots and discount Easter candy; I put away my phone and tell her about the huge chocolate rabbit I found at the drug store for only a dollar. Her relief at our return to safer territory is palpable, and for a moment I feel crummy for having made her so uncomfortable. At the same time, I can't help also feeling a pang of disappointment. I'd been hoping that I could talk about Alicia. I love talking about Alicia, even though she's dead. Probably especially because she's dead. Her absence makes me want to describe her to people, as a sort of proof that she really did exist. She was so smart, I would tell them. I'll send you an essay she wrote. I'll send you a picture I painted of her. I'll send you the words to a song she made up about her weird landlord. Then you'll know that she was really here, once. You'll know that she occupied space, that she breathed, that she was and is still real.

After Alicia died, her sister Beck invited us over to go through her clothes. There were boxes and boxes of skirts, blouses, bodysuits, and booty shorts. At least a dozen floor-length column dresses were draped over the table; Beck explained that these were from a time when the cancer caused Alicia's abdomen to swell with fluid so that she never knew what size her waist would be on any given day. I took home three huge bags of stuff that day. It might seem morbid, but I love wearing her clothes. I love getting compliments on them, because then I can smile and say, “Thank you. It used to belong to my friend Alicia.” I get a funny thrill out of being able to casually drop her name into a conversation.

This clothing is also proof that she was here. A bit of her exists in those skinny jeans, the sheer tops, the vintage dresses; it's as if some part of her rubbed off on them and remains there still, somehow woven into the fabric. I imagine her picking her turning these items over in her hands, admiring the pleats and seams and neat little buttons. I picture her putting them on then smiling at herself in the mirror, tucking a strand of hair behind her ear and wiping a smudge of eyeshadow off her face. When I wear Alicia's clothing, I can feel these things; all day long, I carry an awareness of her with me.

She would probably laugh at that if I tried to explain it to her. Or maybe not. Sometimes the hardest thing is trying to imagine her reaction to something and realizing that I can't ever know, now, what it would have been.

Alicia's grave is perfect. It's in a meadow, right at the edge of a little hill that slopes down towards the banks of a wide brown river; there are trees and, in the summer, there will be tall grasses and wildflowers. She chose a so-called eco burial, and there are no imposing granite gravestones, no solemnly engraved dates and names and aphorisms, none of the gloominess you usually associate with graveyards; just open spaces and light and the living sound of rushing water. Her marker is a little black metal rectangle with just her surname—MERCHANT—painted on it in white letters. Once the weather turns warmer, Beck plans on planting some kind of flowering bush there. For now, we bring Alicia hothouse flowers, their colors bright against the grey winter ground.

On Sunday, we gathered rocks from the field and made a little heart on her grave. Two people produced flasks of bourbon from somewhere in the folds of their dark woollen coats, and we passed them around before pouring some out onto the ground. Two of us read poems, the screens of our smartphones reflecting back the bare branches and fretful April sky above us. Someone's toddler insisted that we sing Happy Birthday, though when we did, he refused to join in. Instead he stood there and watched us, an armful of shiny metal cars clutched earnestly in his arms, looking for all the world like an officiating minister.

We're making plans to go back in the summer; we'll have a picnic, go wading in the river. Maybe sometime we'll go at night and sit there under a huge August moon quietly passing a bottle back and forth, just being with Alicia. Even though she's not alive anymore, we can still bring her things, tell her things, be close to her.

Death is a lonely state, both for those who have died and those left behind; the way our culture treats the dead makes it lonelier still. But it doesn't have to be like this. I think it's possible to mourn and celebrate at the same time, to be with someone you can't see or feel, and to find some kind of joy even when you're mired in loss. I don't want to forget anyone, not ever, not even after they've died. Maybe one of the responsibilities of those still left alive is to make sure that the dead have a happy death, full of light and color and the people they loved.

I want Alicia to have a happy death.

If you like this article, please share it! Your clicks keep us alive!
Tags
death
grief
remembrance
loss
joy
personal essay
Friendship