Haven't Seen Obvious Child Yet? Time To Change That 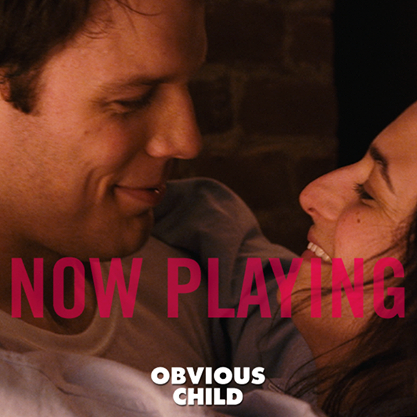 Obviously, abortion is no laughing matter. But set aside the politics and moral debates, and you'll find real women who have considered every angle and know what they want—and a baby just isn’t part of the picture. The film Obvious Child, written and directed by Gillian Robespierre and starring Jenny Slate, is the funniest movie about this very serious situation that you will probably ever see.

Though it's been out since June, the film is still showing in select theaters, so if haven't seen it yet, now's the time. Do it. Now.

It takes real honesty and bold creativity to take a dark and daunting topic and turn it into something extremely relatable, genuine and funny, but that's exactly what the filmmakers have done here. Obvious Child is about a struggling comedian, Donna Stern (played tremendously well by Slate) who’s still figuring her shit out. When her one-night stand ends up being accidentally fruitful, Donna has to navigate a budding romance with a guy who’s still in the dark. Donna navigates social norms, new-wave feminist ideals and her own fear and wariness about whether or not the man really needs to know (or would want to know) what’s going on inside her womb.

The film features a lot of funny and familiar faces such as Gaby Hoffmann, David Cross and Jake Lacy, better known as Pete from The Office. Lacy plays the perfect gentleman nice guy who, if it came down to it, you’d want by your side if an abortion was necessary.

Slate masterfully embodies what it's like to go through a pregnancy scare, an experience pretty much every woman can relate to through personal or second-hand experience. The women in her life also offer their own experiences with the procedure, expressing simultaneous emptiness and relief.

But what I really liked about the film is the “To tell or not to tell” aspect. After a careful decision has been made about abortion options, there are other, less time-sensitive, but still very real details to contend with. Will the man who helped get you into this predicament still be around if you tell him what’s going on? It’s like when men say “We’re pregnant,” as if a child can be extracted half from his body and half from yours. At the same time, there’s an issue of ownership over biology, and the question of what you “owe” a man you’ve only just started to see.

All these questions are explored with a very modern sensibility; this isn’t a film that could have come out at any other time. From its refreshing focus on a funny woman to its dark yet very accessible approach, this is a cinematic journey well worth taking.