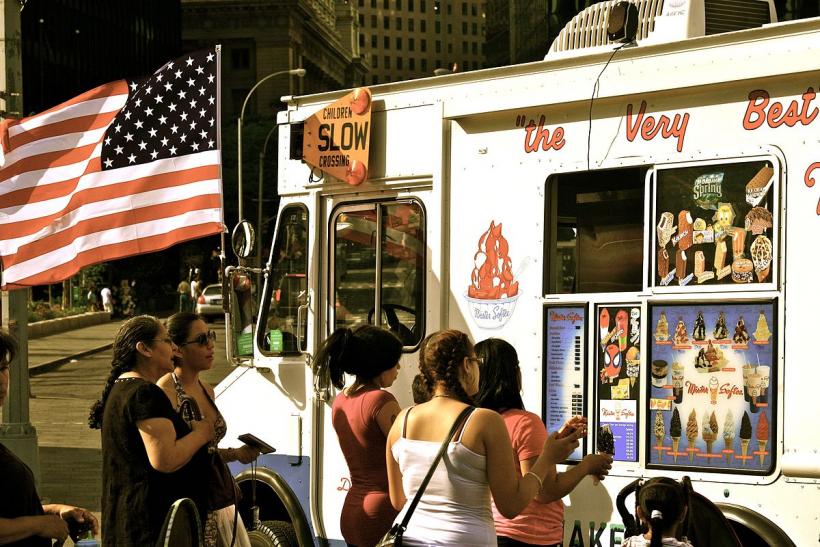 Ever wondered what the ice cream truck song is called? The innocent melody that has brought so many smiles and happy popsicle-sticky faces into the world?

Aaand with that, the ice cream truck is totally fucking tainted forever.

I was spooked enough when I found out that "Ring Around The Rosie" was not the playful rhyme I knew so well. (It’s a chant to remind children of the Black Plague to line their pockets with posies to mask the smell of rashy and rotten diseased flesh. Delightful!) But I moved on to become a well rounded first grader and all was fine. This though? That the ice cream truck song is an irrefutable result of black face-donned traveling minstrels is just. too. much. Stay away from my ice cream, racists!

But alas, it’s true. I scream, you scream, we all scream at the realization that the ice cream truck song was popularized by the same black face performers who brought us Jim Crow. Passed down from the European tune for "Turkey In The Straw", the lyrics describe watermelon as the poor black man’s summertime treat:

While we’re on the topic of racism ruining things kids love, we should just go ahead and add Zip-A-Dee-Doo-Dah and original cuts of Fantasia and Dumbo (which features a crow named Jim) to the list.

Our nation’s history is riddled with insanely questionable traditions and although we now recognize the crudeness of many of those indiscretions, it’s not like we’ve reached the politically correct promised land. Will we one day be appalled at the negative way Muslims and Middle Easterners have been depicted on TV programming? Will we be shocked by the sexist lyrics of popular music? I'm gonna go ahead and predict the future—yes. Most definitely, yes (hopefully).

I’m not going to boycott the ice cream truck now that I know the origin of the treat-truck jingle. Instead of giving up on mobile frozen treats I’d rather do what I can to ensure that in a few hundred years people aren't writing about how we knew the lyrics were morally wrong, but the tune was just so catchy no one tried to change them.

But hey, I’ll follow the truck blasting The Entertainer instead.