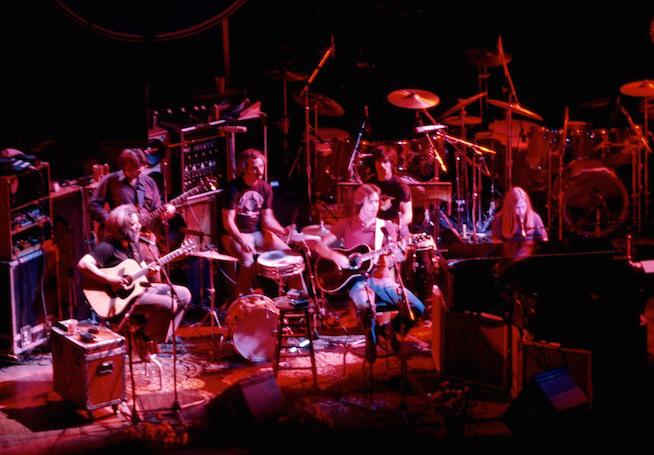 An acoustic performance at the Warfield Theatre in San Francisco in 1980. Image: Wikipedia

As we waited patiently outside the decaying concert hall, I felt a little stupid. There were around eight of us waiting for Bobby to show up, and we looked like Pavlov’s dogs awaiting the bell that brought our reward.

Currently I’m sober and my life is amazing, but I was lucky years ago when I smoked pot with Bob Weir.

It's still one of the most amazing things that has happened to me, and I wanted to share how it went down . . .

Keep on Trucking. I had been following the Grateful Dead, as much I could afford to, since 1986. I wasn’t a true Deadhead, since I bathed on a daily basis and didn’t live in a VW bus selling veggie burritos to support my marijuana and LSD habit. I did, however, like to go to their concerts along the East Coast: New York, Philadelphia, Boston, Washington D.C. and anywhere else they played. It was always a weekend event consisting of tailgating, drinking, tripping on LSD, and listening to timeless and amazing music. Me and my partner-in-crime had a huge crush on the bass player, Bob Weir. Bobby would take the microphone to sing, and we would scream up to him that we wanted to bear his children. We had class.

After Jerry (Garcia) died in 1995, I replaced my Dead shows with concerts of Bob Weir’s band, Ratdog (later called The Other Ones and the Dead). Howard, an aging, balding and overweight hippie was friends with a former co-worker of mine. We now had an inside track to the inner circle of Ratdog. We were going to be able to meet the band before the show. I could hardly contain my excitement. I was going to meet my crush Bobby, and this was sure to be the highlight of my entire existence (up until this point in my life).

As we waited patiently outside the decaying concert hall, I felt a little stupid. There were around eight of us waiting for Bobby to show up, and we looked like Pavlov’s dogs awaiting the bell that brought our reward. Twenty-five minutes later, an ominous black Range Rover pulled up to the rear stage door and four people got out. There was Bobby.

I was nervous as hell and couldn’t stop staring at him. He looked spaced-out, but I wasn’t surprised to see that. Here was a man who was a member of one of the most influential bands of all time, and who participated in Ken Kesey’s infamous acid test. He was God to a lot of people. He quickly took Jerry’s place after his passing, and now he was standing dead center in front of me.

Meandering out of the car, Bobby looked worn and sleepy, with unruly hair. He wore a stretched-out, faded blue T-shirt and baggy jeans. He resembled what an aging rock star should look like: an icon who had spent the past 30 years drinking, drugging and living life in a hurried world, pleasing the masses. Bobby inched his way over to us, and Howard introduced us to him.

I gingerly shook Bobby’s hand as I made eye contact with him and told him how great it was to meet him. He didn’t hold eye contact with me at all and was looking over my shoulder. I was disappointed. Didn’t he know I was one of his biggest fans?  Didn’t he want to get to know me better? Ha!

Bobby soon became more attractive to me as a rock star singing on stage than he was as a real person. He wasn’t present (in the moment), and seemed more like a mirage of who I thought he should be. He’d obviously met hundreds of thousands of groupies in his time, and this tiny connection with me was nothing. Selfish as I was, I thought I would at least get a smile out of him.

We were supplied with All Access VIP passes and were able to follow the crew onto the stage and be part of the real inner circle. I noticed a man carrying instruments and cables across the stage. During the concert, I was granted access to the roped-off sound area and could listen to the band directly through the sound board's headphones. I was also granted access to the green room, which had a full bar and a buffet.  After the rollicking concert, I went back to the green room and hung out with the band and the crew. Drinking beer and making small talk with the band members, I weaved my way over to Bobby to listen to his conversation and see if he had any words of wisdom to extend to me.

I didn’t get a glance my way, so I beelined back to the bar and grabbed another beer. I was feeling antsy and decided to take a seat on the plush green velvet couch. I plopped down on the couch with a sigh, and within minutes Bobby came over and sat next to me. Gulp. I was sitting on a couch next to Bob Weir. What did I do to get so lucky? A waft of smoke was coming from my left side as a joint was being passed around the room.

Finally! I was wondering when the drugs would come out. When the joint passed over to Bobby, I was nervous and had made a conscious decision not to drink too much or smoke a lot of pot that evening. Bobby took a toke and then haphazardly passed it over to me.

Are you fucking kidding me? Bobby Weir is passing a joint to me? I was mildly shaking when I grabbed the joint and took a long hard puff on it. I was sharing Bobby’s saliva. I was as high as one could be. Soon after, the inner circle party was transported to Bobby’s suite at the Four Seasons Hotel in Center City. The festivities continued in a palatial suite with other roadies and groupies. The group was smoking pot, and bottles of champagne, beer, and wine littered the dark mahogany coffee table — some half-full, others empty. I drank it all in, and was soon drinking what was available to me: anything I wanted. Let the games begin.

Bobby was conversing with a band member in the next room, where four hookers were also in attendance, making small talk with the other band members (I was dumfounded that call girls were in attendance, but being naïve is a prime characteristic of mine). It was quite the party, and I soon befriend one of the roadies . . . and let’s just say, along with that I was given two tickets and VIP passes to the concert in Atlantic City the next night.

I jetted back home in a taxi the following morning and was dizzy with my prior night’s experience. I went to Atlantic City that night and took a friend of my brother’s, who is a huge Deadhead and is indebted to me still. Through the years I attended Ratdog concerts, either in Pennsylvania or San Diego, I would seek our roadie friend, and he would remember me. He normally gave me VIP passes and show tickets for other concerts.

It was nice to make friends with boys in the band.

If you like this article, please share it! Your clicks keep us alive!
Tags
Grateful Dead
Bob Weir
Dead Heads
smoking pot with Bob Weir