How To Be Married With Kids And Still Have Frequent Sex 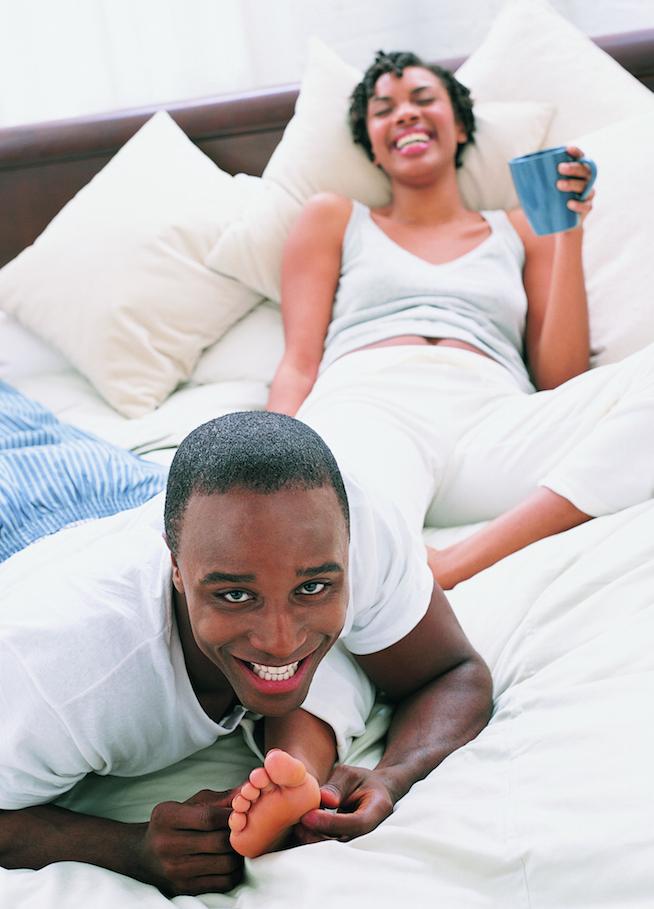 Married sex doesn’t have to be restricted to Saturday nights.

I heard him pad softly into the room mere minutes after I had shut off the light. I held still. As he climbed into bed I felt myself involuntarily stiffen then relax as his chaste cheek kiss meant I didn’t need to worry about having sex tonight.

Steve and I were a fair way past the honeymoon period with two small ubiquitous boys.

I felt a vague sense of guilt about my physical withdrawal from my husband but I soothed it by talking to friends over wine and tea. They were tired too, they were nursing and snuggling and tending to kids. They were stretched literally and figuratively. We excused each other. Our bodies were not our own, but neither were they our husband’s.

The next morning Steve was making us family brunch with both boys underfoot when I came downstairs after sleeping in. Usually, he played records and worked at the griddle, frying pan and cutting board at once. The silence registered in the back of my mind as I slipped my arms around him for a front to back hug. It was his turn to stiffen. Moving around the island I hopped up on our custom cherry stools and started picking at the raspberries that he had begun spooning out on the plates.

“What’s wrong?” I asked him. It wasn’t with tenderness, but closer to an accusation. I knew what was wrong.. He asked for so little from me. None of it through words, but a physical appeal, and I had been rebuffing him for an unreasonably long time. Instead of apologizing, or leading him upstairs to really apologize I picked a fight; going on the offensive was a lot easier than dealing with the reality of our shrinking sex life.

“I can’t believe you are pissed at me. You know how tired I have been, it is totally unfair to be angry because I wouldn’t have sex with you last night.”

“It’s not that…” Here he trailed off. I was just revving up, gaining ammunition. He never talks to me about what he is feeling, blah blah. Somehow I didn’t move forward with my next line of attack. I saw the slump of his shoulders as he flipped the pancakes that he made from scratch without his usual flair. I could do it, I could beat him down until he was left apologizing to me, but this time I didn’t.

I had expectations for him as a father and as a husband. I wanted him to work full time, do the majority of the cooking, tickle and toss our kids, take out the trash, and listen patiently as I ranted about how obsessed everyone was with strollers. I felt entitled to a Sherpa, a chef, and a cheerleader.

What did he want from me? It was a short list. To feel as though he could make me happy. Secondarily he wanted to be satisfied in bed.

That was something I could give him.

I know the catalyst to connection for my husband is sex. For me it is conversation. It doesn’t seem fair that I justified withholding sex for days or weeks at a time. I would never accept a husband who ignored my attempts at conversation for a week. That would be ridiculous. I ignored my friends’ assertion that sex on Saturdays was all we needed to offer. I silently set myself the goal of sex five times a week.

Seven years later, we have sex 5 to 7 times a week. Nothing like the tangled sheets of our early days, but from what I can tell from book club far more than our peers.

He feels the kind connections that he craves. He looks at me with love, strokes my hair and asks me questions. For less than thirty minutes a day I have my chef and Sherpa. Beyond that I have a friend and supporter whose physical affection I no longer rebuke. I also have orgasms at the hand of my husband, and that makes us both happy.

Get the best of The Good Men Project delivered daily or weekly, or become a Premium Member!

5 Reasons Why Being Plump Trumps Being Slim
Anna Rosenblum Palmer