Period Envy: What My Father Taught Me About Misogyny 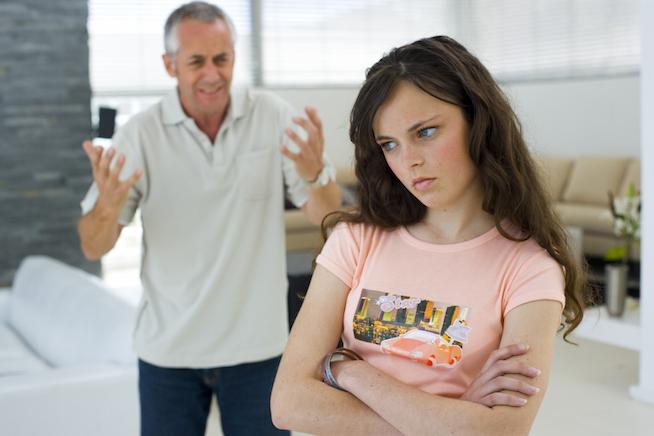 If there's a penis envy, there's got to be a period envy.

When I sat down to write this essay, my goal was to perhaps put a funny spin on Freud’s infamous penis envy theory, find a way to allude to the fact my father might have been jealous of my newfound ability to reproduce people, or perhaps he felt insecure that his little girl was getting older. But, then again, I was never his “little girl.”

When I was a girl, I could hardly wait to get my period. My friends got theirs in grades 6 and 7, by the time we were in grade 8, almost everyone I knew had theirs. It wasn’t until the summer after grade 9 when my period decided to present herself. Although I was sick and could not eat for the entire day, I was happy and relieved for her arrival. But not everyone in my household was.

I came from a family that laughed at each other, and if we weren’t laughing, we were yelling. We were not like in those 80s family television shows where, if one of the children messed up, the parents gave them some great advice and everyone felt great as the credits rolled. Not my family.

A couple of days into my period, my family and I were sitting at the kitchen table eating dinner. Halfway through my father said he could “smell my maxi pads in the garbage in the bathroom.” I was horrified and instantly started to cry. My mother called him an “asshole,” but he just laughed and responded with a stern, “The garbage needs to be taken out.” I wept in shame and embarrassment and went to my room.

Why my father took this approach by telling me I need to take the trash out is beyond me. It’s similar to when he accidentally ran over my dog and instead of dropping the bomb sensitively, he caught me off guard (again at the dinner table). “Fluffy is dead!” he firmly said. “I ran him over with the car.” To which I instantly started to cry and, again, went to my room.

When I sat down to write this essay, my goal was to perhaps put a funny spin on Freud’s infamous penis envy theory, find a way to allude to the fact my father might have been jealous of my newfound ability to reproduce people, or perhaps he felt insecure that his little girl was getting older. But, then again I was never his “little girl.” What it does bring up for me, as a feminist, is how his degrading approach symbolizes the struggles women have had throughout time when dealing with misogynist men.

The imbalance between the patriarch and the matriarch was alive and well in my home. My mom had to have dinner ready when father came home, and he didn’t support her having interests outside of the home. He would make gross comments about women’s bodies while watching television. This was not my mother’s fault, but an example of the dysfunction that came from our culture dishonoring, disrespecting, and devaluing women, ever since our ancestors started farming and using their daughters as a form of trade, and likely before that. Rather than being honored as goddesses for the values they bring into the world, women have been consistently devalued, shut down, quieted and left out — for example, if lawmakers had included women's voices in the first place, we wouldn't need to clearly define what consent looks like in the bedroom yet again.

A therapist recently told me a father’s role is to make his daughter feel protected, valued, honored, and loved unconditionally, so she grows up with a healthy sense of self-esteem and respect for herself. To put it lightly, my father really dropped the ball on that, but throughout the years I challenged him. I challenged him when he called me names, when he hit me. As I challenged him, my flickering light of courage grew and I gained strength slowly.

As I got older and healed, I eventually grew past my father — I see how he holds pain, and I understand why. As his father lies on is deathbed, my father and his brother refuse to visit him because of the horrendous violence they endured at his hands. While I fear it might be too late for my father, change seems to be on the horizon for the next generation.

With activists like bell hooks' Feminism is for Everybody and Jackson Katz' The Macho Paradox raising awareness in our culture on the need for men to heal from the pain they’ve passed down and projected on to each other through violence and repression in an effort to create “real men” for that last 100 or more years, we will hopefully move towards balancing the imbalance for a culture that uses less violence and respects women and each other, where fathers honor their sons and daughters as they are — a culture where, when young women get their periods, they are embraced and celebrated.

Why I Can't Be Friends With My Exes
Isobel Jones

Period Envy: What My Father Taught Me About Misogyny
Isobel Jones

Lonely and Confused: How Parenthood Sent This Mom Into Therapy
Isobel Jones